The start of April brings a few thrills here as the creeping phlox come into bloom on the berm that most people imagine is on my neighbor's property.  That bridge in the picture crosses a concrete drainage swale that looks like it would make a natural property line.  In truth, the line is about ten feet to the left of the left edge of this picture! 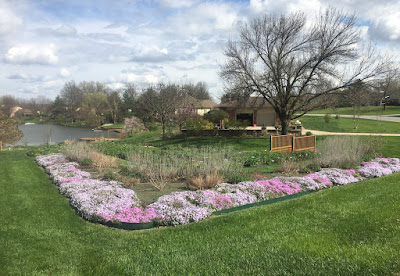 If the weather remains cool, the phlox remains in bloom into the third week of April.  It's still great as I write this blog.

Lawn grass wakes up, too, and it loves to creep under the metal edging in invade the phlox.  We are going to have a heck of a time keeping grass from overtaking the entire berm.  Some phlox will be wounded in the process.

April is also the month of weekly piles of white Priority Mail boxes that my mail carrier picks up on her mail run.  The volume of a daylily garden increases by a factor of two or three every year in a fixed amount of space.  It behooves the grower of these plants to keep the size of the clumps down to reasonable size.  The surplus is donated to various regions of the American Hemerocallis Society, which is the international daylily organization. 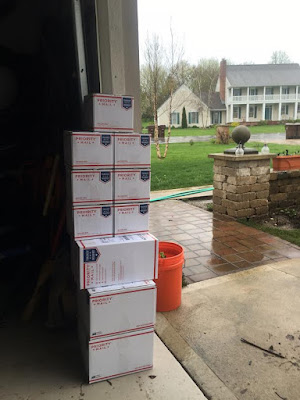 You can imagine the frustration of post office customers who found themselves behind me in line back in the days before I learned about "Click 'n' Ship."

Orange is one of the colors of April, orange buckets for holding the incoming daylilies in water until I get a chance to plant them.  As long as you change the water when it starts to look cloudy, you can hold daylilies in water for weeks if you have to. 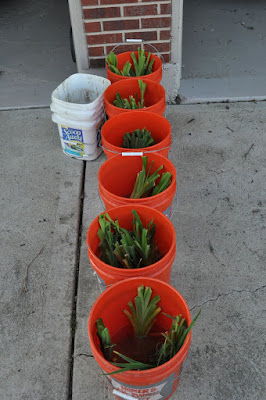 Our car parking area outside the garage resembles a nursery in April.  Karen and I go out several times a week to see what's available at our favorite nurseries.  Karen is building as much of a lilac collection as the property can take.  No argument from me on that score!  We also found a bright lime yellow variety of Ninebark to punctuate a line of shrubs along the sides of the driveway. 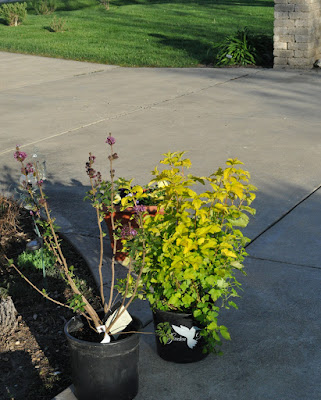 Karen also favors Bleeding Hearts.  She has found several good spots for them.  The largest currently is right at the corner as a shade bed goes downhill and turns to run under a line of ash trees. 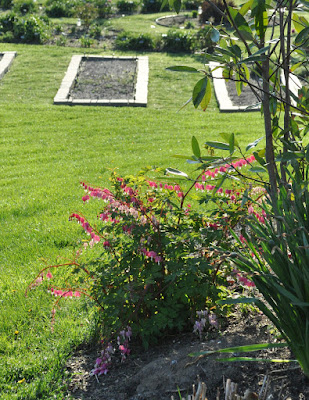 She has planted pansies in many large pots and is thinking about where the petunias will go.  Not at ground level, certainly, because the rabbits will get them. 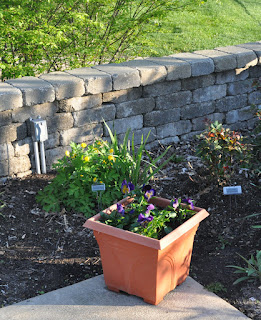 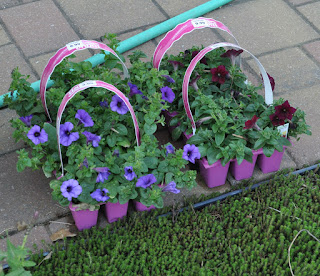 April is the month of lush growth in the daylilies as they break out of dormancy.  I love the look of this clump of Bob Selman's VANILLA VICTORY.  The plant habit is excellent, with new fans developing on the perimeter.  The upright habit of the foliage in April makes me imagine the plant is shouting for joy. 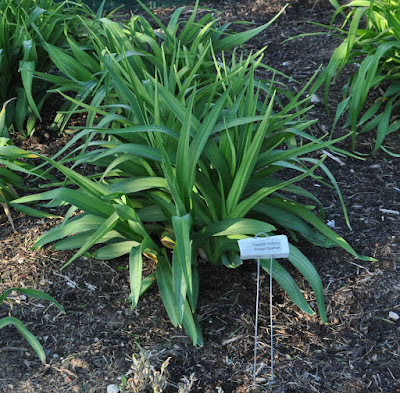 Lucy the poodle is joyous about getting back out on the deck at breakfast and lunch time.  She's eight months old now, passing out of her first heat.  A month or two down the line, she'll be spayed and microchipped.  We are so happy to have her in the family! 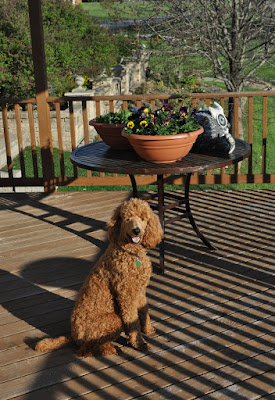