The Deck at the Duckworthy Estate

These past couple of weeks have passed so quickly, and I'm glad for that.  It feels as if my life has lately been one continuous weeding session with Kathy.  We've put in three or four hours every morning to get control of runaway encroachers of every kind, from varieties of prairie grass to some kind of woody scourge that spreads like a mat, to seedlings of several kinds of trees.

This drama has been an accompaniment to the construction crew's work on our new deck.  Getting the bandboard mounted, with proper flashing, took several days.  Then came the moment of building part of the frame and supporting it with two-by-fours.  Here's a happy moment on August 22 when Carl Brandt and his helper, Tim, started to mount the diagonal corner pieces. 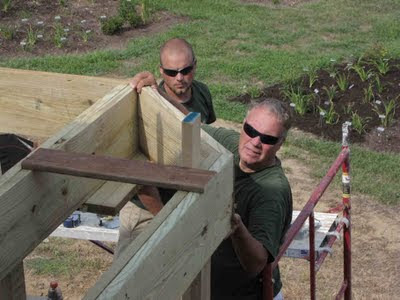 As quitting time approached, the three-man crew finished the other corner.  That's Steve Brandt, Carl's son and the President of Branco, with his back to the camera.  He is applying pressure to get the boards into perfect alignment.  That attention to "better than good" is the signature of Branco work.  These guys were in our house doing interior remodeling for six months, and we never worried about them overlooking a serious flaw in the original construction or the subsequent remodels of this place. 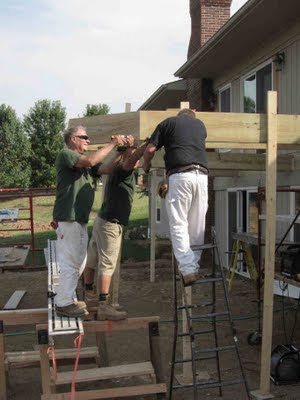 They came back to dig the holes for the concrete piers.  Last week the city inspector approved their work and they returned this week to pour concrete.

I was up early yesterday to prepare for the final assault on a garden bed I've named "Nebraska" to remind me of how big it seems when I've let the weeds take over.  I went out to get the newspaper and saw this amazing dawn picture a few minutes before the sun came up behind the line of trees across Hidden Lake. 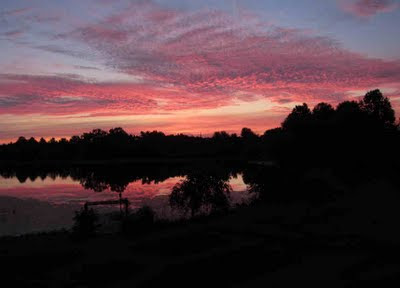 This sight took me back about forty years to a morning in Durango, Colorado.  I was a young professor then, living in a small ranch house that we'd bought (yes, bought) through some combination of miracle and fluke while I was staying over in town after accepting the job offer at Fort Lewis College.  I'd been unable to find anything to rent or buy in two days of looking with a realtor, when a future colleague called me at the hotel to say he'd learned of house that a man wanted to unload fast for the $500 equity he had in the house.  I was able to assume his mortgage and become a homeowner, thanks to a small nest egg my wife had saved before our marriage.  One winter morning I saw such a sky and took a picture much like this one.

Kathy and I finished "Nebraska" in the mid morning, leaving me time to drive over to University City and dig the last forty selected seedlings at the Green Center, where I have been a "resident hybridizer" for eleven years.  Now that lovely chapter is closed, and all my daylilies are in one accessible spot for the first time since I began to hybridize in 1993.

This morning I planted those forty while the crew began to work on measuring and cutting notches in the first two support posts.  By the end of the afternoon, they had the support beam in place for the eight-foot wide walk-out section from the dining room.  Here's the view of the scene from the sliding door there. 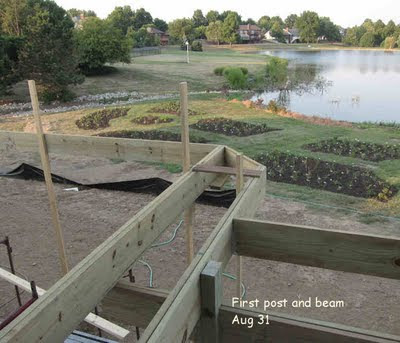 We've had regular visits from a family of Canada geese all summer.  They like the seeds of weed grass and the tender shoots of things sprouting in the drainage swale and on the edge of the lake.  They have two teenage children. 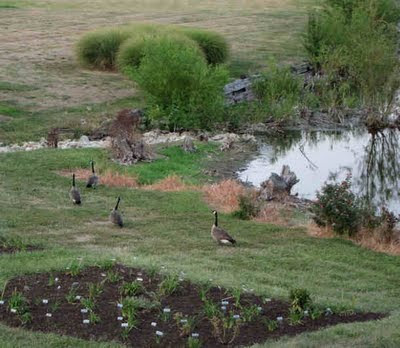 Either Dad or Mom are guarding the rear of the procession.

I was so happy to see the main support for the deck take shape that I rushed to Westlake Hardware and bought three gallons of stain, color "Sierra," because of the California connection to Kathy.  Of the three Haas girls, I am convinced that I got the one who is perfect for me, as I am for her, so she says.

Tonight at dinner I played a CD that just arrived, a reissue of a Paul Desmond jazz LP that I discovered in a New York record shop about fifty years ago.  That is a span of time I find difficult to talk about, though it seems like just last week.  It was Desmond's first recording session with the guitarist, Jim Hall.  The CD is titled "First Place Again."  I just about wore out the LP. 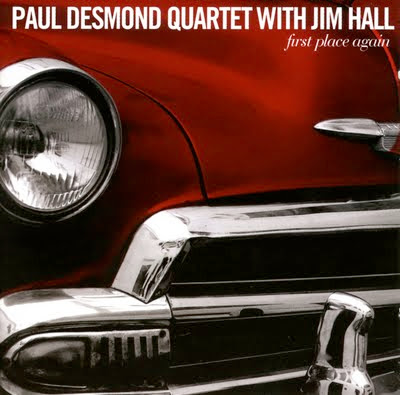 That's a nice image on the CD cover, but the car looks mid-50s to me.  I wish they'd used a picture of a '58 Chevy Impala or a '59 T-bird.
Another memory from almost fifty years ago is seeing Paul Desmond and the Dave Brubeck Quartet play at the Lambertville Music Circus across the Delaware River from New Hope, PA.  I sometimes went with a date, sometimes with my family.  I remember seeing Ahmad Jamal, the Count Basie Orchestra, the Maynard Ferguson Orchestra, and Pete Seeger there.  These musical excursions were the highlight of my summers at that time of my life.

Tonight as we enjoyed grilled salmon with sauteed spinach and some rice, all these memories came into our Now.
Posted by Seeker at 10:22 PM 1 comments