How-To books in the Olden Dayes had the elevated title, "Gradus ad Parnassum," meaning steps to Parnassus.  In 1970s slang lingo, that would mean "Be all that you can be!"  I use it to express the state of incompletion of our expertly-built deck and paver patio beneath it.

We are so close, but yet so far!  Here's a picture of the crew leader, Steve Brandt, attaching a header for the second set of stairs yesterday before lunch. 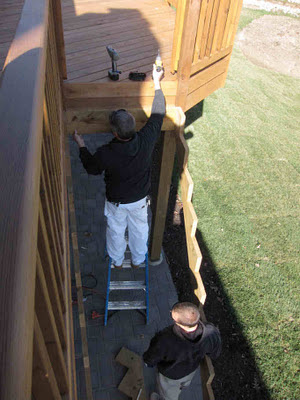 When they quit the previous afternoon, I stained the three "stringers," the header boards, and as many step boards as Steve thought he'd need (all of them in the garage).  As Steve and Tim Yanko got to building the steps in the afternoon, Steve realized he hadn't bought enough cedar for the steps and would come up three steps short.

Steve's father, Carl Brandt, came in the afternoon to take over what Steve had been doing and got the job to this point by quitting time. 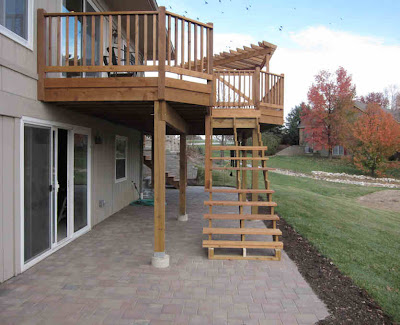 Construction is held up while the lumber yard awaits delivery of some new, non-warped, cedar railings for both sets of stairs.  Steve will bring those on Friday, I hope, with the extra boards for the steps, and they will complete the deck in another two or three days' work.

The new sod on the right of the picture was laid down two weeks ago today, before a series of good soaking rains.  The sod crew was all over themselves complimenting me on Steve's 5-star job of laying the patio pavers.  We'll have to put a bit of furniture down there, as the area is no longer "just a simple walk-out."

If you look through the stairs, you can make out the big set of wind chimes I hung up to celebrate the completion of that area.  The chimes were a retirement present to myself in 2010 and had hung on the old deck here until Steve tore it down in August.  Now we can enjoy them again.  I enjoyed them last night as I drifted off to sleep.  They weren't loud enough to keep me awake, nor so silent as to have no presence.
Posted by Seeker at 11:53 AM 0 comments