"Design Intelligence" and Its Enemy 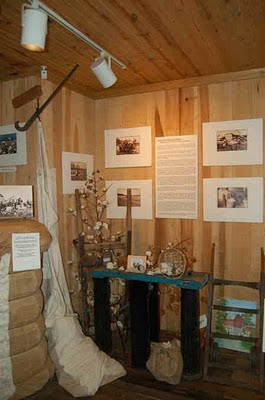 A couple of years ago I visited the Sikeston Depot Cultural Center and admired the tastefulness of the exhibits in the small space that was available. I think it is true that most of us sense the features of any space we enter. Some of us sense in more detail than others, and some of us can verbalize what we sense more readily.
Probably the first thing we sense is cleanliness and the qualities of color and light, unless an ordor grabs our attention! (I won't go near scented candle shops. A museum friend is especially sensitive to mold that I can't detect. On the other hand, I like the aroma of fresh-baked bread or a good beef stew.)
In the picture above we see "design intelligence" at work in a small area that tells the story of cotton production. The lighting is beautiful. Three-dimensional objects shape the space we enter and draw us toward the two-dimensional pictures and text panels. The objects defeat what would otherwise be a "tyranny" of right angles. If the room is a box, and the pictures and text panels are flattened boxes, you have to introduce curves as well as "empty space" like the space in the branches of the cotton plant and between the legs of the table. Think of curves and empty space as the "freedom fighters" in your displays.
I see design intelligence almost everywhere I go. You don't need formal training to do a good job in a local museum. You just need a sense of cleanliness, light, space, variety, and narrative.
Here's an exceptional example by a volunteer at the Katy Depot in Sedalia. 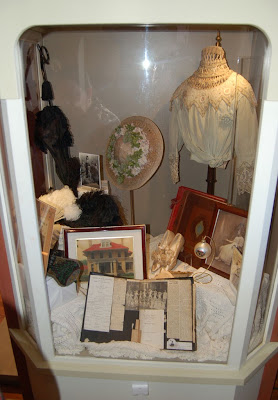 Everything in that small case is placed to perfection. Everything contributes interest.
The Enemy of design intelligence is not a person but a feeling that impels you to add something to an excellent display because you happened to acquire it after the display was perfect. A voice inside you says something like "What's wrong with displaying another treasure?" It may also say, "If someone donates something, I have an obligation to display it immediately!" As you listen to that voice, see if you can hear the camel's backbone break. It only takes one additional thing to destroy the perfection of a sentence, a meal, or a display.
I write this in a mild sense of mourning for the museums that once had fine examples of design intelligence and ruined what they had by filling up the space with more and more "stuff." There are times, when writing a sentence or a paragraph, that the new word that comes to mind is a destroyer of what's already there. It's best to dismantle the whole thing and start over.
That's true of museum displays, too. Nothing good happens when you keep adding and adding. You don't make "bad" any better, and you quickly degrade "good." The mission is not to display things, anyway, no matter what the mission statement says. The mission is to stimulate (not numb) the intelligence of a visitor. The unique power of design intelligence is that it invites discovery and learning. The enemy of design intelligence creates only a desire to flee.
This cold season is an opportunity to look around the museum and find an area where you can take everything out and start over again. Go ahead. You have eight weeks, maybe ten. Give yourself an empty space, clean it up first, and then create a learning opportunity in that space. Create something different that suggests an idea. Juxtapose items that have never had a chance to inhabit the same space and see what happens. Play around with combinations for four or five of your eight weeks and then polish up what works best in the final three. And then invite me over!
Posted by Seeker at 1:06 PM 0 comments