There's some kind of annual aquatic plant in a pond in one of the city parks.  I don't know what it is, but it has bulbous formations at the water surface at the base of the leaves.  It spreads by stolons just below the water surface.  They look like tubes and are about a foot long.  The plant spreads rapidly to form a thick carpet on the surface of the pond.  The leaves are glossy, with a shape that reminds me of clover. 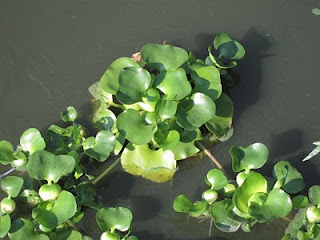 In some places the plant ascends almost a foot above the water. 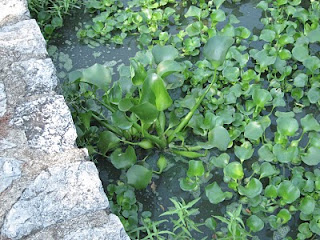 Here's the sort of carpet it makes. 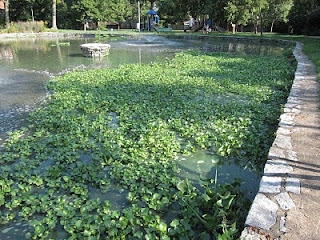 Since posting this eight hours ago I've heard from a dozen people who've identified the plant as Water Hyacinth.  It floats on top of the water and is either a pest or a desirable water plant in the south.  In the north it dies over the winter and is often sought after in pond gardens.  I've heard that at least one southern gardener grows it on purpose and pulls out the surplus to use as daylily mulch!
Posted by Seeker at 10:31 AM 4 comments