Reading in a Chinese Garden 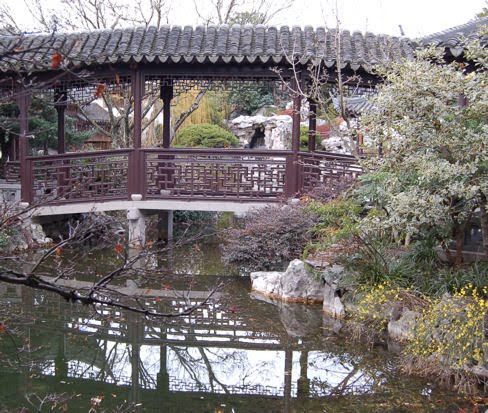 Last month Kathy and I visited the Chinese Garden in Portland, Oregon.  It's the type of garden that one of the high officials of the Ming Dynasty might have built for himself in some remote city to remind him of the splendor of Peking.  We arrived just in time to join the one o'clock guided tour for a small group of people numbering no more than ten.

Our guide began with an imaginary orientation of where this garden might have been sited in a crowded Chinese city.  She pointed out the high walls, for privacy, and let us know that the decorative openings in the walls were not authentic.  They were necessary because of the Portland building codes.

She began to talk about ancient China, and the stages of examinations that a scholar had to pass in order to become a high court official.  Immediately she reached into a blue tote bag and withdrew a map of China.  This would be a reference point as she spoke of the geography, the distances, and the differences in population. 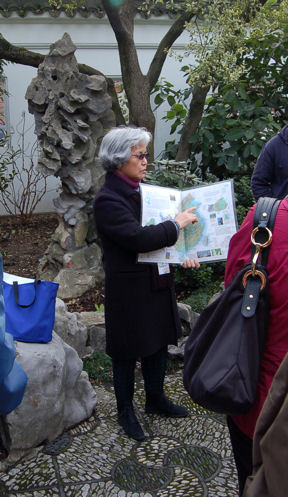 As we moved from one stopping point to another, the guide discussed the variety of plant forms in the garden and the symbolic importance of fish in the water.  "You may wonder why you might see a whole fish on a platter at a Chinese festivity," she said.  "Why don't they remove the head and tail before serving it?"  We all waited a few seconds before she said, "It's because the fish represents abundance, or the wish for abundance, and the head and tail symbolize the entirety of life."

We entered a variety of rooms around the garden and heard about what they symbolized to the owner and to his visitors.  One room had a small library and a writing desk with inks and brushes, the trappings of beautiful thoughts, beautiful writing, and beautiful images.

At last we came to a set of carved wooden panels.  Our guide pointed out the theme of the carvings and the presence of poems there. 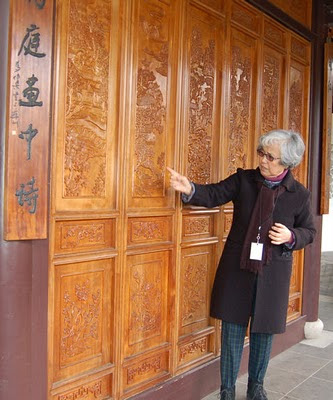 And then, to end the tour, we all had a special treat.  She reached into her tote bag and withdrew a book of Chinese poems and their English translations and she asked for two volunteers to read to the group.  I thought immediately of so many museums back in Missouri, places where I had seen a Civil War loyalty oath, a telegram from General Alexander Doniphan to the Governor of Missouri in 1838 in which he refuses to carry out an order to execute Joseph Smith and a party of Mormons.  I thought of the journals and stories of Laura Ingalls Wilder, the stories of Mark Twain, the letters of Harry Truman, Eugene Field.  I thought of the recollections of former slaves, the diaries of German immigrants, the letters of soldiers to their parents in time of war.

There are so many opportunities to use a map or to engage visitors in reading the primary sources of history.  I saw the magic of props like that in Portland. 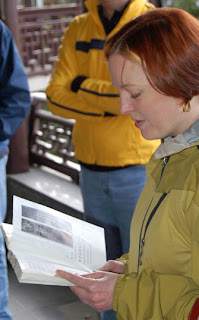