Color at the End of May

I took a few minutes today, just a few, to enjoy the shapes and colors in the garden.  This salutary practice is contrary to the doctrine of "the overwhelmed landscaper," a class of people who tend to bite off more than they can chew and then gripe about it with their mouths full.  Epic yardwork projects are a way of life for the overwhelmed gardener.  Since we're not camping out on a ten-year siege of Troy, and since no bard is available to sing of our anger, feasting, or hideous death by pitiless bronze, we make plans we have little hope of seeing through and then, quite late, and incompletely, see them through on a landscape.

We have designed our gardens to delight us with form and color before the main season of the daylilies, which occupy most of the garden space on this acre and a half.  Just today I noted the beginning of daylily season with the opening of the charming miniature flower named Bitsy.  It was a Father's Day present to me from my late wife back in 1992.  We lived in Hyde Park, Vermont then, and our favorite place to discover and buy plants was the Cady's Falls Nursery in the tiny hamlet adjoining Hyde Park village.  That's where San bought Bitsy for me.  Don Avery was reluctant to carry it because its foliage coming out of winter looked a little ratty.  Ratty looking daylilies don't sell until they grow better leaves. 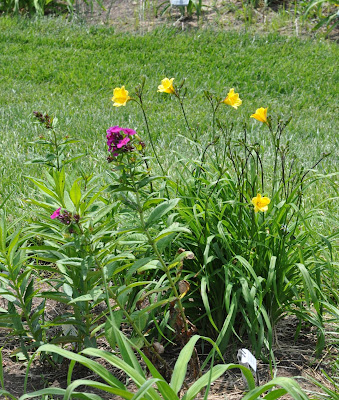 Bitsy is sited on the near corner of one of the beds we see down below us while sitting on the deck or looking out the dining room slider as we make breakfast, lunch, or dinner.  It's a lucky break that the garden phlox I planted next to Bitsy also came into bloom this week.

Typical of the driveway of the overwhelmed landscaper is an array of potted plants not yet planted.  The zinnias and yarrows below have been on the driveway for a full week now. 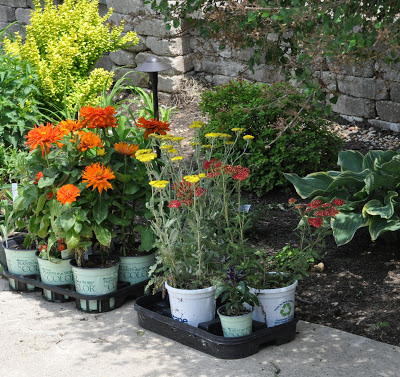 The name of that zinnia is "Inca."

On the other side of the driveway there are small zinnias to accompany several other yarrows, and they are actually planted! 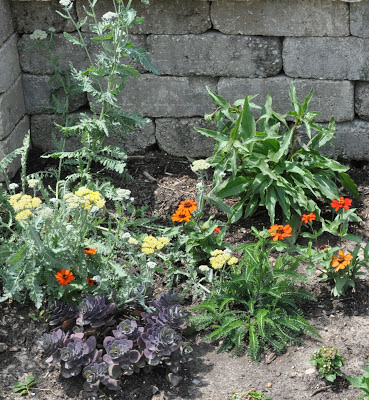 This past week marked the beginning of our annual poppy season.  Two years ago on May 27, my Wichita friend, Linda Farris posted to the daylily Robin about her annual poppies.  Here is what she said:

"I decided to stay home and play in my own yard this weekend.  Here at Fieldstone Cottage there is always another bed to weed or more plants to set in.  Still blooming strongly are magnificent double pink and red poppies which form huge swaths of coral pink or intense red in whatever bed they rest. These pinks were heritage-bred poppy seed from the Ukraine, brought to this country with Russian Mennonite immigrants some 150 years ago.

"My original seeds years ago were a gift from a Mennonite descendant and thrown out over a December snow-covered flower bed.  Imagine my total surprise when they sprouted in February, grew to enormous mass in April, and bloomed with vigor in May and June. They are a jaw-dropping sight.

"My red poppies were a gift from above.  I'm guessing that a single seed must have come in on a load of compost from our community recycle center, as one year a single red poppy plant appeared in a pink poppy patch that was mulched the previous fall with community compost.  The robust red double poppy plant made tremendous seeds, which I saved and cast out the following winter in its own huge bed.  As they are self seeding, I now have a 30 x 175 foot bed filled every year with these red beauties.

Here is the pink poppy we started last year from seeds Linda sent us.  This one must have germinated last fall, as all the others are much shorter. 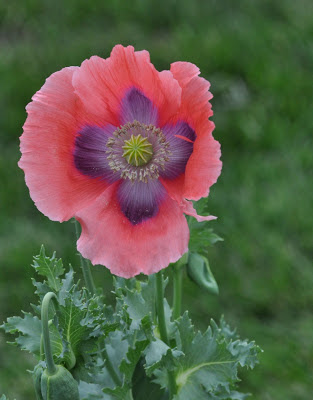 The Siberian Irises also bloom with the peonies at the end of may.  This one is Light of Heaven. 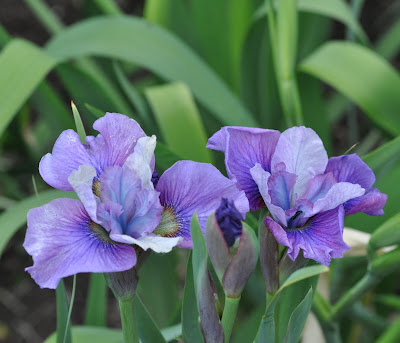 Amber White is a Siberian iris we received as a gift from the renowned daylily hybridizer, Mike Huben, when we spoke to the New England Daylily Society in October of 2011. 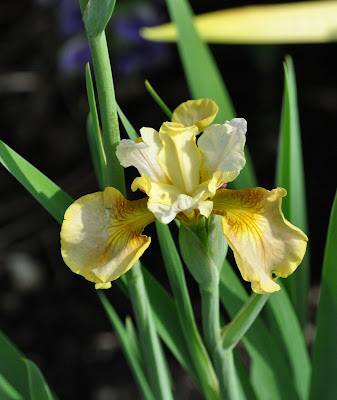 The smoke bushes at the lakeside are at their most colorful in late May, just as the knockout roses come into bloom. 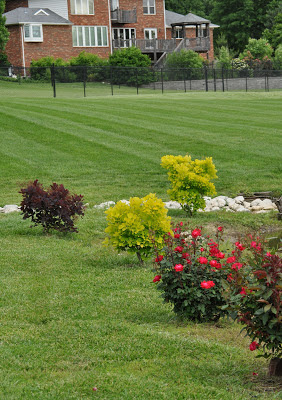 To the left of that scene, a Crimson Pygmy Barberry bush provides a reddish purple accent in a circular bed of daylily foliage and emerging poppies. 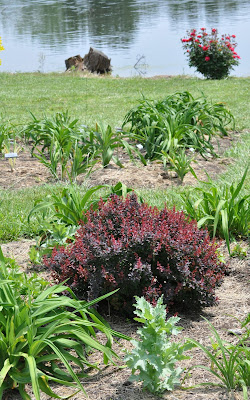 What is overwhelming the landscaper, who feels five weeks behind right now, is the epic project of moving the selected daylily seedlings into a new bed on less sloped ground so that he can rework the terrible soil in the old bed and plant his new daylily seedlings there.  He (me) is digging a hole for each transplant and is mixing two shovelfuls of compost into the dirt of each hole.  The process of transplant entails inspecting each plant for its habit of growth and dividing it if there are a lot of fans growing tightly together.  This is the smallest of three sections of the new bed, and I mulched it this morning. 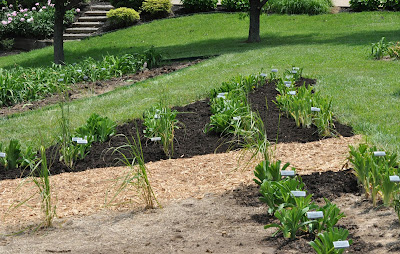 An important feature of late May for a daylily collector in St. Peters is the coming into bloom of the daylilies that arrived from sellers in the deep south.  I bought over two hundred new daylilies, a record for me and the main reason I'm overwhelmed.  Today, my favorite of the southern bloomers is Cat's Eye by the Mississippi hybridizer, James Townsend. 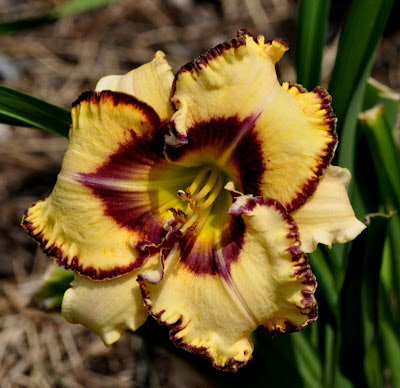 I took this picture at noon, but the flower was open perfectly after a cool night when I went out at eight this morning.  I love everything about this face!  Just thinking of it makes me stop whining!
Posted by Seeker at 5:51 PM 1 comments

As the cool spring gives way to the warm spring, we have had weeks of enjoyment from flowering plants that in some years only last for days.  I've been preoccupied with planting hundreds of daylilies that have been arriving in the mail and going straight into buckets of water to wait their turn.

Yesterday, I took some time in the afternoon just to enjoy the plants in their spring personalities.  Here is a simple pleasure: a pot of chives.  We seldom think to use these herbs.  They have grown in this pot for years, and in the spring they flower. 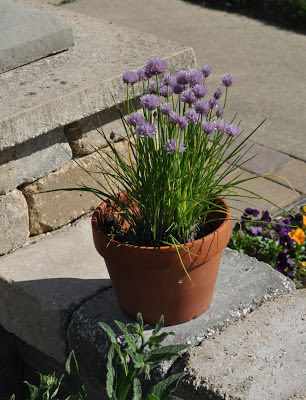 Just below that pot is a thriving plant of Yarrow.  We grow many types of Yarrow around here.  They are plants for an arid climate, yet they do well here. 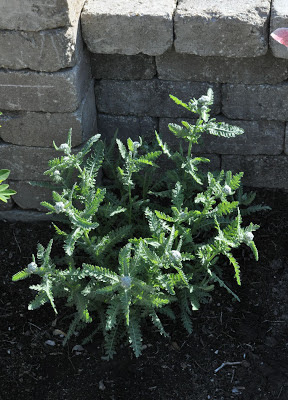 These plantings are in narrow beds that line our "car park" area outside the garage.  To the left of this Yarrow is a native Baptisia with yellow flowers that will open in a few days. 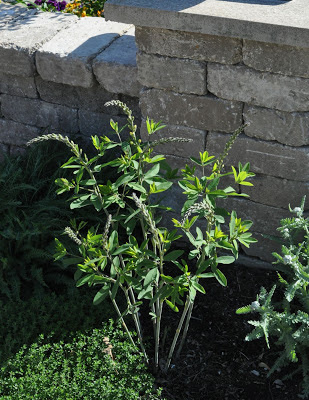 You can make out the carpet of herb "somethingorother" at the base of the Baptisia.  Kathy knows these herbs, tends them, encourages them, and tells me their names.  But I'm not good with names of any kind except for daylilies, family members, and pieces of music.

A steep slope leads from the car park down to the back yard.  Thanks to a previous owner's planting of three ash trees, we have some shade on that slope, where Kathy has made a garden of shade plants.  This is Meadow Rue.  It grows tall, provides clusters of fuzzy purple flowers, and delicate leaves to balance the heaver look of all the hostas in the area.  Kathy found four Meadow Rue plants last summer for this bed. 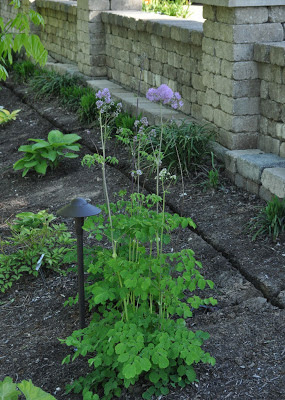 The main interest of this garden is the interplay of hostas, heucheras, astilbes, and ferns, with a border of lariope along the top. 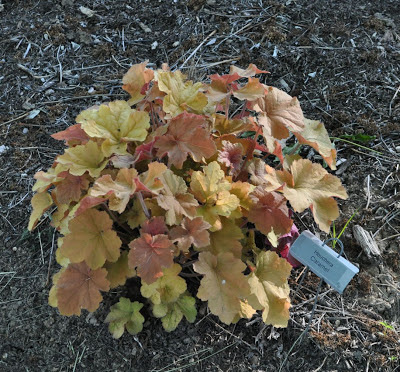 "Caramel" heuchera brings so many shades of color to a garden that you wonder how anything else will attract attention.  And yet, each variety we grow has a unique contribution.  Look at "Snow Angel" below and notice that it's in flower before any of the others. 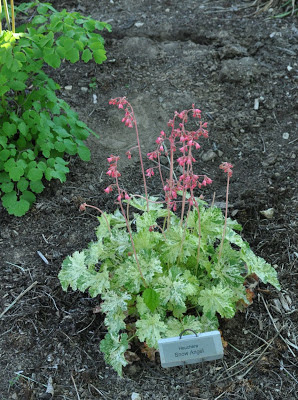 "Sonic Smash" contrasts "Snow Angel" with a dark pattern on its leaves. 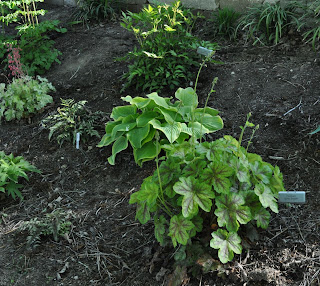 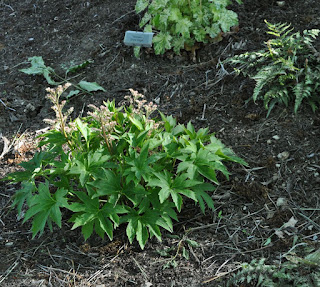 The hostas in this bed have a great deal of sentimental associations for me.  Below, a variety of "Aureomarginata" was given to me by my late friend and daylily mentor, Oscie Whatley, as a housewarming present in 1997. 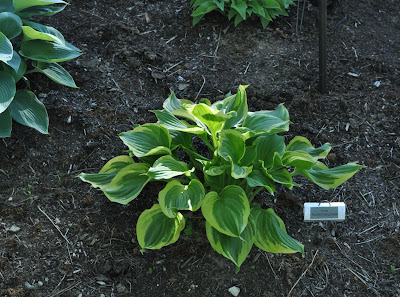 And this plant of "Hadspen Blue," which formed a majestic honor guard along our front garden in University City, made the move to St. Peters.  I haven't seen this variety lately in the nurseries.  It must be out of fashion.  But is perfection ever out of fashion? 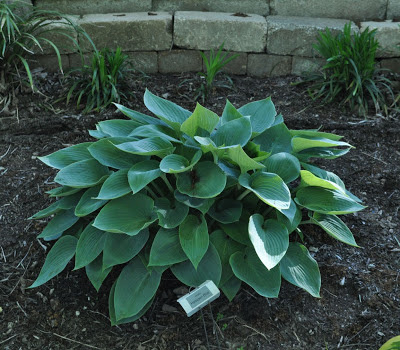 Easily the best feature in this garden is the gardener herself, my Keb. 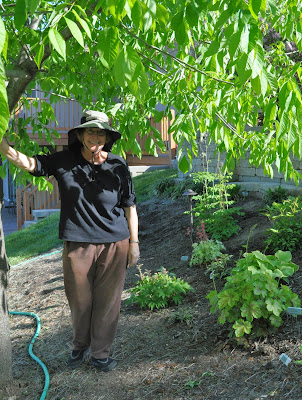 In the back yard, amidst a vast collection of daylilies, we have an iris collection, a peony collection, and mounds of "Becky" shasta daisies, various phlox and coreopsis plants, and three smoke trees at the corner of the property. 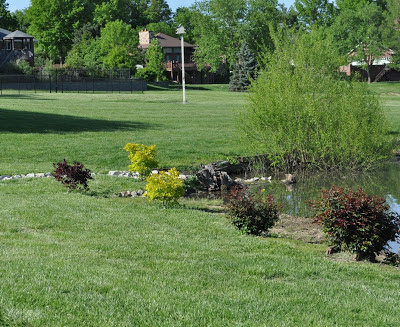 I favor the bright lime green colors in contrast with the dark plum, a color which I've used at the center of a circular bed of pink, lavender, and white daylilies nearby.  The accent plant is a "Crimson Pygmy" barberry. 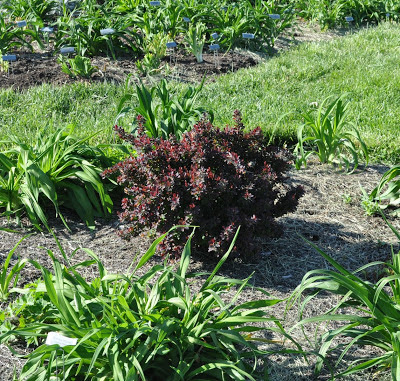 Another circular bed in that area contains a ring of orange daylilies with a "Golden Mound" spirea in the center. 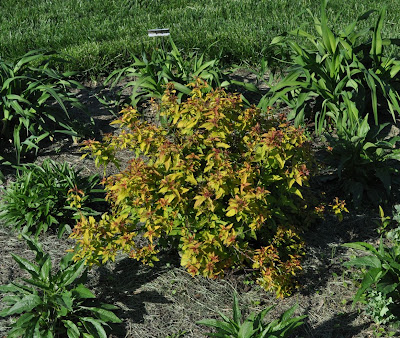 The peonies and irises are just coming into bloom.  This is "Hawaiian Coral" peony next to "Blue Flirt" iris.  The geranium in the background is "Max Frei." 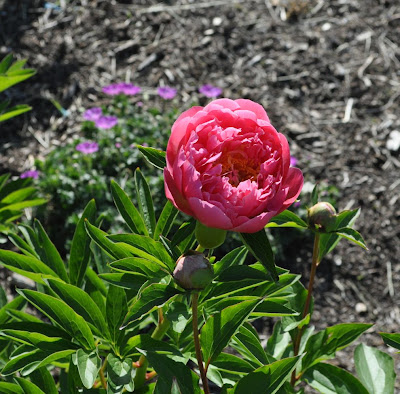 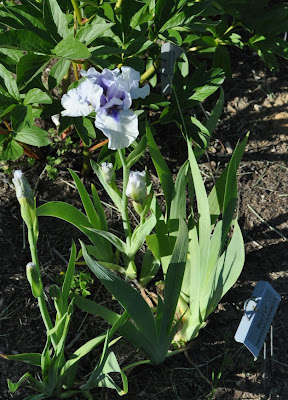 We don't consider the Canada Geese to be "pets" here, but the two who seem to have made themselves feel at home near our dock are bidding to be called "family." 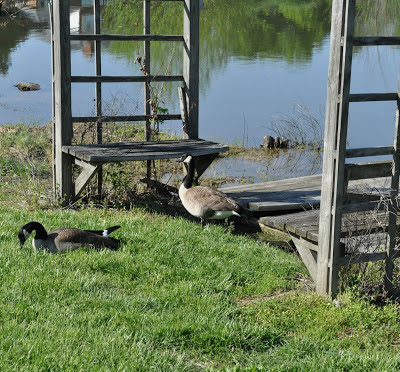