In the Last Week of March

Where has March gone, this glorious month of perfect outdoor weather?  Kathy and I took on a couple of epic projects and brought our favorite contractor back to help with two jobs we knew we couldn't do well on our own.

One rainy day last week I bought a walk-behind lawn mower with powered wheels, a 21" Honda, so that I could do the tender areas where I don't want heavy lawn machinery chewing up the sod.  The early spring put the grass into a burst of growth, so I mowed most of the property in two big sessions on Sunday and Monday.  Today I feel like well-rusted machinery in a junk yard.  I'm used to 30 minutes on a treadmill at the gym.  Two hours behind a lawn mower put my legs into a state of emergency, and I had to do another hour or so yesterday to do the back yard.

This is not whining.  I am delighted to have the exercise outside rather than on a treadmill in a gym.

Steve Brandt and Tim Yanko have been correcting the French drain that probably never drained anything in its life. 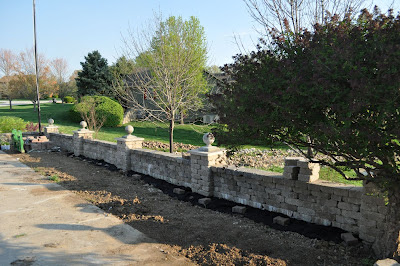 This wall is on the right as you walk out of the garage.  On the other side is a steep grassy hill that was showing signs of steady erosion last spring, owing to the failure of the drain to catch any of the storm water that flows down the driveway and through the wall on the way to the lake below.  The French drain connects to a buried drainage pipe that Steve installed on the other side last April.  It empties into the storm drainage swale in the distance beyond the wall.  We'll get to that part of the story in a minute.

Opposite this wall is a companion wall on the left as you walk out of the garage.  They are moving the wall so that we can plant on either side of it. 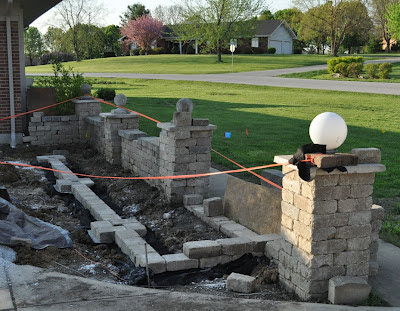 They finished laying a new base yesterday afternoon.  The original wall was laid up without a base.  Since the soil can become waterlogged after a long rain, we wanted to protect against settling and tilting, so the base includes at least six inches of crushed rock.

Kathy has been at work since Sunday planting one of the two corner berms we built last May. 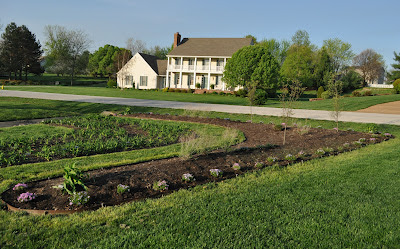 She planted creeping phlox in two colors all along the outer edge.  The wispy shrubs on the crest of the berm are Russian Sage plants just coming back to life.  The three trees are Kousa dogwoods.  They flower after leafing out in the spring and are suited to a full-sun location.  Our "line-out" beds for daylilies are laid out in S-curves inside the berm. 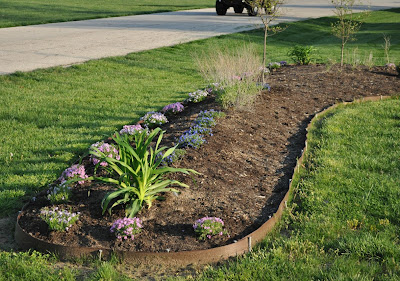 Looking at it from the other end, you can make out the pretty blue perennials (Lithodora) she alternated with a small variety of creeping Thyme.  The Lithodora is a creeping plant that she hopes will join with the Thyme in covering the surface.

The collapsed drainage swale I've been writing about is within two more work sessions of being emptied of rubble and paving brick.  I spent two hours yesterday lobbing bricks onto the grass. 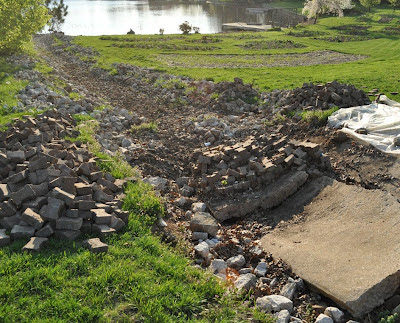 I finally exposed the ugly break that had been obscured by layers of paving bricks.  Not that this is any better, but "inquiring minds want to know."  I imagine the developer built this swale in the same fly-by-night manner he built the house we live in.  Over the years it cracked, and water got under it, and a trickle became a rivulet, and so on, until a big section collapsed into the undermined area and broke apart.

The problem I saw when we first inspected the property is that the mass of fill material was mounded up down the center of the channel, forcing storm water out to the sides and sometimes over the bank.  The sides in this area have been considerably widened by water flows, and the slope of the broken concrete exacerbates the problem.  A great deal of the rock I've tossed out has to go back in on the sides to protect the banks and force the water toward the middle, which has to be lowered. 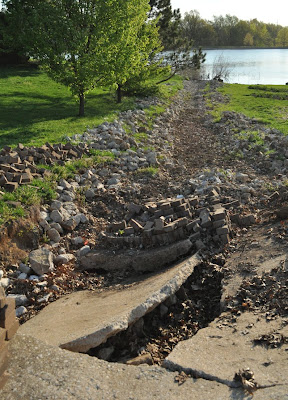 "Sometimes in this life, Baby, ya see things ya don't wanna see."  There's one more pile of paving bricks in the way of seeing what I have to deal with, and one more small zone of rocks beyond the bricks.  I might have to invite Steve and Tim back with their jackhammer to break up that big sloping section, but there's another big section under the last brick pile.

By the end of this week, I want to know what this looks like without rubble.
Posted by Seeker at 8:26 AM 0 comments

Greetings from Hidden Lake, also known, only by us, as "Lago Segretto."  A year ago I began to toss bricks and rocks out of the center of the principal storm drainage swale that divides the left side of our property.  The immediate goal was to clear obstructions and humps from the channel so that storm water would not be forced over the banks and across the left side of our back yard.  This was achieved, but there was a lot left to do with the enormous amounts of broken concrete, patio brick, and rubble that had been tossed willy-nilly into that swale over the years.

With such an early warm-up this March, Kathy and I got out there to try to finish the job.  I think we are about a third of the way into the finish.  Here's where we left off today. 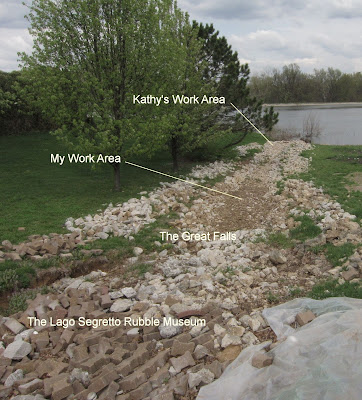 At the top of the picture you see where I began to clear obstructions earlier this month.  That area is labeled "Kathy's Work Area" because Kathy knows something about fitting rocks together in a wall or on a bank so that they don't move.  She is establishing a layer of rocks on the floor of the swale and a firm slope of rocks on each side.
In the middle of the picture is my work area for the past week, where I've been using a crowbar to reduce an enormous hump running lengthwise and forcing storm water to eat away at the sides.  On the ground on both sides of the swale you can see a line of rocks and rubble I tossed out of the swale.  Some of this will go back in to firm up the floor and reinforce the sides.
Here's a close-up of Kathy's work where the swale empties into the lake.  I couldn't begin to do this well. 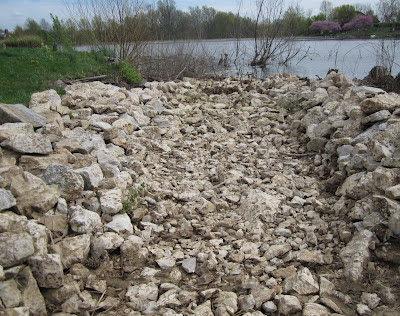 The view below shows the relationship between our shoreline and some of the neighbors. 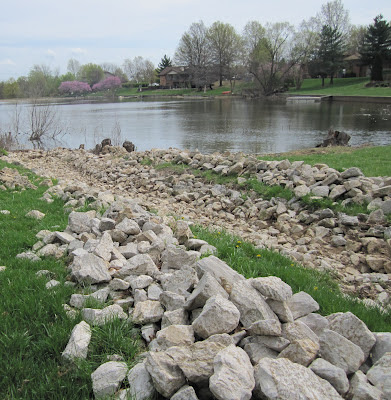 Now we're looking uphill from the previous vantage point.  I'm up there contemplating what's necessary to help the water get to the area I've cleared out. 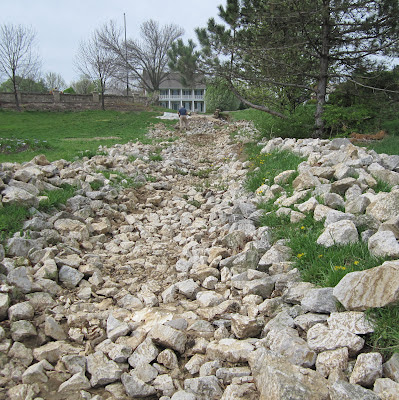 It's about time to quit for lunch in this picture, but I've just insisted that I want to toss out the last of the broken concrete rubble that impedes water flow on the right side.  That's a foam pad in my hand for kneeling. 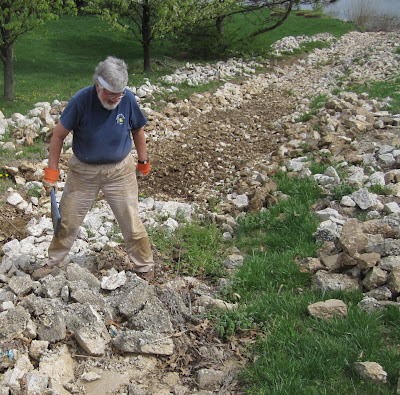 This is Kathy's last picture before going in to warm up lunch.  I'm tossing bricks and concrete chunks onto the side.  When I stopped there were two improved channels on either side leading to the single channel from my work area on down to the lake.  By "improved" I mean pretty clear of needless obstructions. 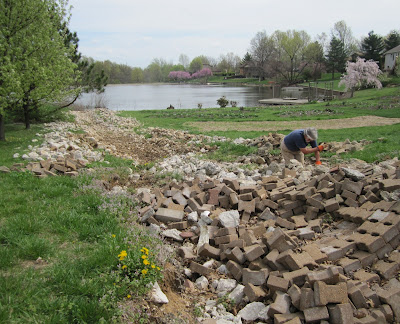 My stopping point was within a few feet of the area I call "The Great Falls."  At that point, there's a sudden drop of more than a foot in the center, while on both sides there's a gradual but unwelcome set of new channels.  About six feet above The Great Falls is the bizarre arrangement of old patio bricks that form the main collection of The Lago Segretto Rubble Museum.
I plan to decommission the museum next month and "deacquire" the collection of broken concrete, rocks, and bricks.  But first I have to toss them all to the side and clarify what the real runoff channel should be.  The engineering problem is that the original poured concrete swale that lies outside the lower right corner of the picture has been undermined for years and is in various stages of collapse.  I can't do anything about the undermining action.  My goal is to eliminate an eyesore, shore up the dirt sides, and halt the gradual deepening and widening of the channel from the force of water striking dirt.  Where water is going to flow, I want it to strike rock all the way to the lake.
Steve Brandt and Tim Yanko are back this week correcting a French Drain along a wall near our garage. 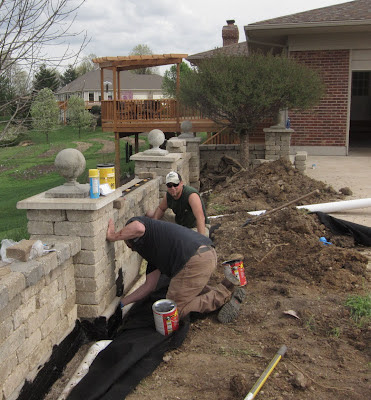 Steve is applying a sealer to the base of the wall so a wave of storm water can't overrun the drain in the trench you see there.  The previous construction of the drain was faulty.  There was no way for water to get to the drain.  This correction and one other will help prevent the erosion of Kathy's shade garden on the other side of the wall on a steep hillside.  The other correction will be to cut a channel across the concrete driveway at the low spot and install a grated drain to catch and redirect the occasional waves of water that surge across the road from higher properties and straight down our driveway toward that wall where Steve is working.

On the other side of our parking area, Steve and Tim have dug a trench for a good solid base to support the repositioned free-standing wall there. 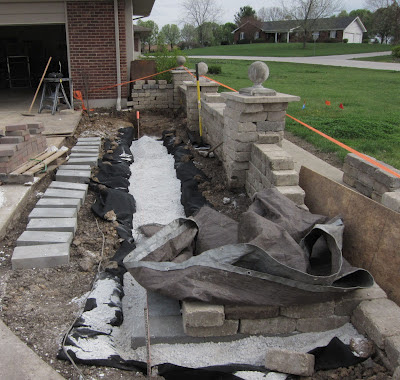 They are moving the wall toward the parking area about five feet to provide a good planting area between the wall and the concrete walkway on the right of the wall in this photo.  Currently there is only a useless 4" space between the wall and the walkway.  By moving the wall we can beautify the view from the road while still having some planting space on the inside of the area.  The wall will not go all the way to the garage but will stop about four feet away to make room for a paver walkway to match the paver landing on the opposite side, which leads onto the deck.
Posted by Seeker at 9:07 PM 1 comments