Bright Day After a Grieving Day 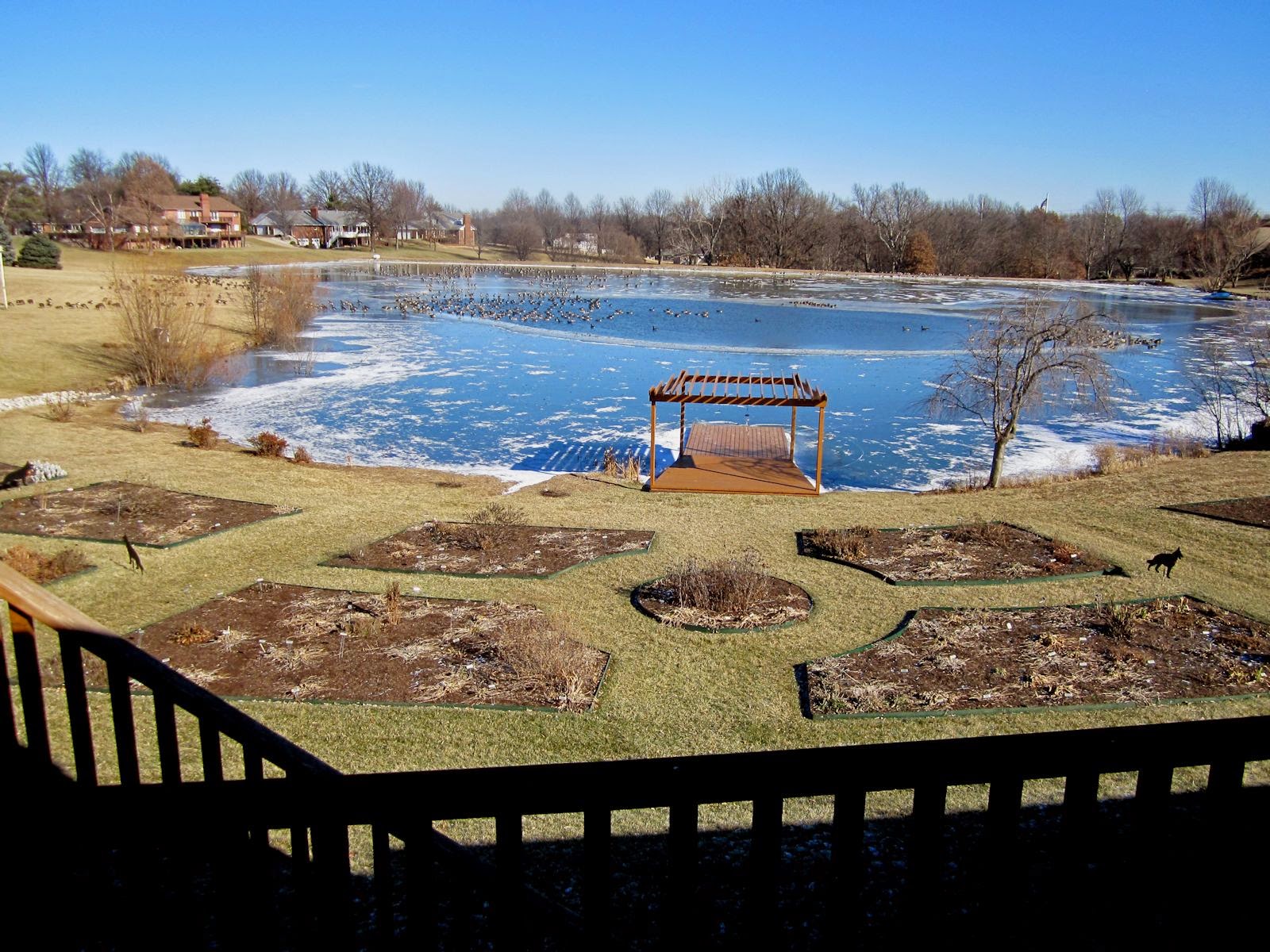 There's an open circle of water inside frozen Hidden Lake today.  A huge council of Canada Geese arrived a week or two ago to take up residency.  In the lawn below you can make out the black cardboard outlines of two German Shepherd "scare dogs."  They are mounted via springs to dowels in the ground, so they bob and turn as if alive.  The ducks and geese give them wide berth.

Yesterday Karen and I attended a memorial service for my friend, Bob McConnell.  A huge crowd of friends and family were present at the Unitarian Universalist Church in Columbia.  I have not attended a memorial since the visitation I sponsored for Kathy Bouman at the end of August.  Experiences and memories have a way of overlaying.  Kathy had been a lay minister in her Unitarian/Universalist congregation.  Yesterday I was mourning two people.

I haven't written a blog since Kathy died in August.  It's not that I've been stuck in "neutral" as the world moved on.  I began a new relationship in the fifth week of mourning her loss.  It didn't interrupt or stop the mourning; I've had many a good cry since then, and there is more in there.

But I see human experience is something we feel in more than 3-D.  I began courting Kathy while I was still morning the loss of Sandra.  I wrote to Kathy that I believe we grow up in the manner of an onion, in rings of memory linked to emotional experience.  I told her there was a four-year old inside me named, "Mike," who had no understanding of death and its finality.  "Mike" was wailing for San and needed to be comforted and talked to by "Michael" who was many layers beyond "Mike" and who was able to function normally in the world.

The meaning of "normal" has to be hedged because there is nothing normal when our layers of experience and memory are at odds over the meaning of the absence of a loved one.  I told Karen about this when we began to see each other regularly.  She said, "you have to take care of that little one inside you."

Right now it is hard to look at a winter scene without a memory of winter seen from a hospital window a year ago, when Kathy was in for strategic planning by a team of specialists and then in again a week later for surgery to reinforce her neck vertebrae, which had been seriously compromised by in inoperable tumor.  This time a year ago we knew we no longer had a long-term future to think about, so we made the most of each day remaining to us.

I can also feel uplifted by a bright sunny day.  Mourning does not interrupt the capacity to feel, and it is not exclusively about sorrow.  Mourning is a long process of bringing a loved one back fully into memory.  It is an expansion of memory to include what I now include bit by bit, the memories of winter when I was courting Kathy in West Plains, the memories of our winters in University City before we began to house hunt, the memories of a house under renovation here.

The house has changed over the last few months.  Karen has decorated for the holidays and now she has begun to decorate for daily life.  There are several new guitars in this house and I play them a couple of hours every day.  I have given away the makings of a woodworking shop that Kathy assembled just before there would be no woodworking here.  Karen has added many bird feeders outside, and we are about to double the capacity for starting seeds in the basement.  The cookware has changed, the dishware has changed.  I am wearing a lot of new clothing that Karen likes to see me in.  Blue jeans, for instance.  I haven't worn blue jeans in twenty-five years.

I was looking at a map of the route to Jonesboro, Arkansas yesterday when I noticed Kathy's old town of West Plains to the immediate northeast.  I remembered seeing signs to Jonesboro when she and I were out and about during our courtship.  I thought of spreading some of her ashes in West Plains.  I should say that "Mike" had that idea.  It's not likely that Michael will go there again.  Kathy left all that behind her when she began a new life with me.  She carried all she needed in memory.
Posted by Seeker at 1:32 PM 0 comments