She has been gone two days now.  I'm full of sobs.  Not fair, not ever fair.  And yet, lucky for her that she went peacefully, in sleep, shortly after we spent an hour on the couch in the living room, and I brought up every memory from our big pond of lucky, happy moments. 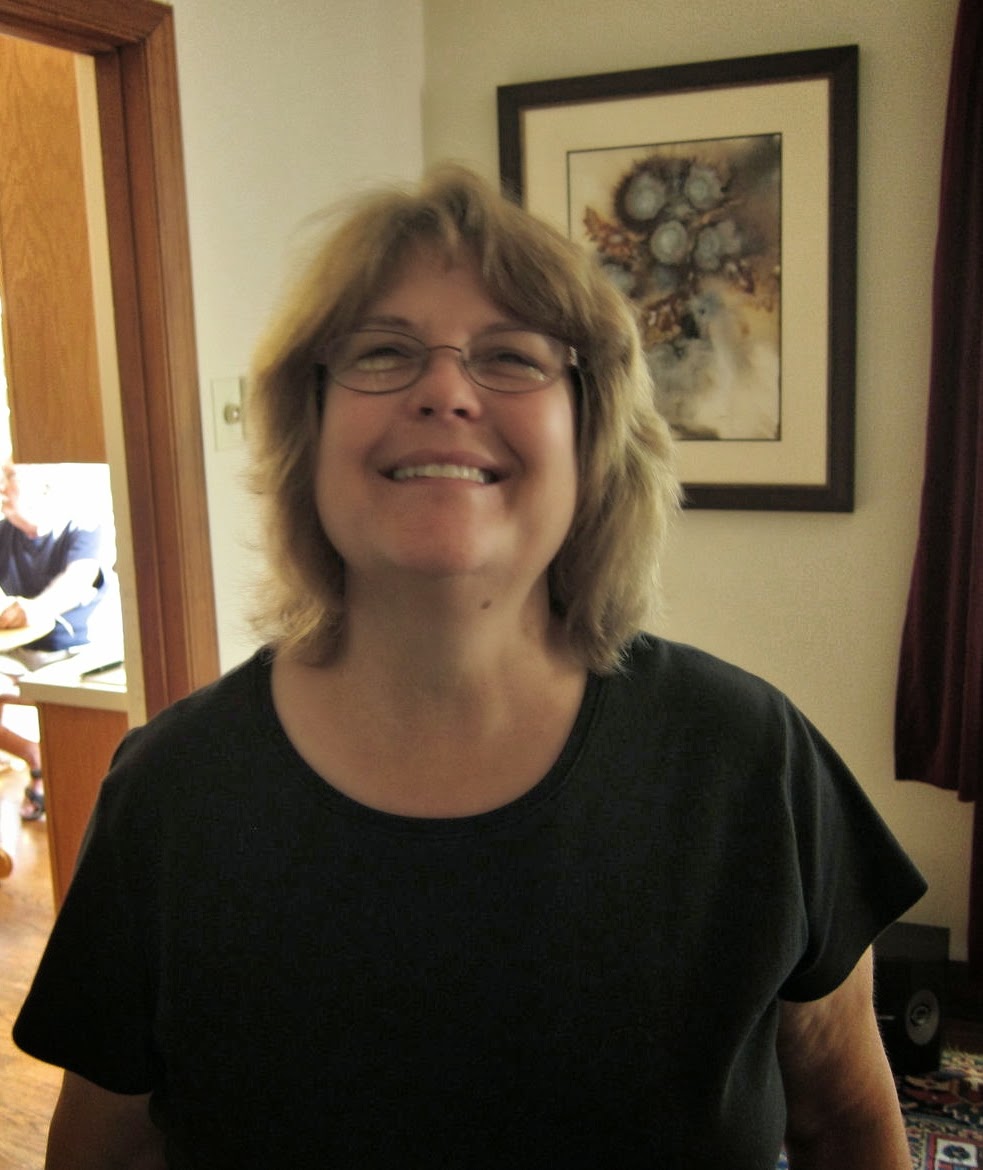 The smile was bigger than the woman.  The eyes!  I told her she had the prettiest eyes I'd ever seen.  I snapped this picture in 2010 when members of her family visited us in University City before our move to St. Peters.

Today I went through my pictures and selected a nice set for Kathy's memorial visitation.  They bring back memories, and it's as if she comforts me in my grief.

We had just fallen in love a few weeks before we set up this "selfie" in University City on New Year's Day, 2009. 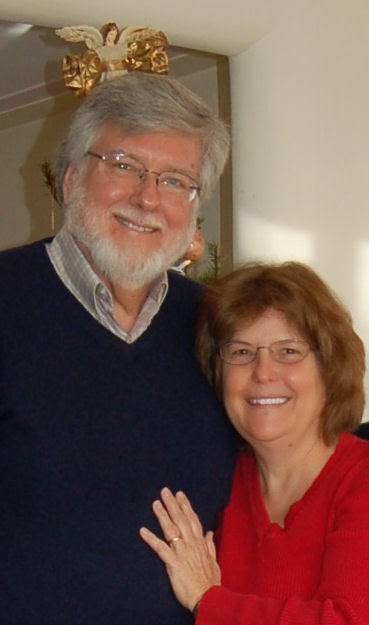 We were made for each other.  That's what it felt like every day we were together.  We had done the work of growing up and shouldering the pain of loss, and when we discovered our pathways of communication it was as if our late spouses had manipulated Fate to bring us together.

Kathy had bought a collection of daylilies at her West Plains home several years before we got together.  I was a hybridizer; she wanted to try her hand at hybridizing.  Her intellectual gifts were formidable.  She applied them to our daylily collection -- the dozens of plants I bought for her and "my" plants at the top of our lot.  She evaluated all the collection and gave me a list of "my" plants that she wanted in the back yard with her collection.  She would have become an outstanding hybridizer, though she only had two seasons available to her.  Here she is last summer in the back yard. 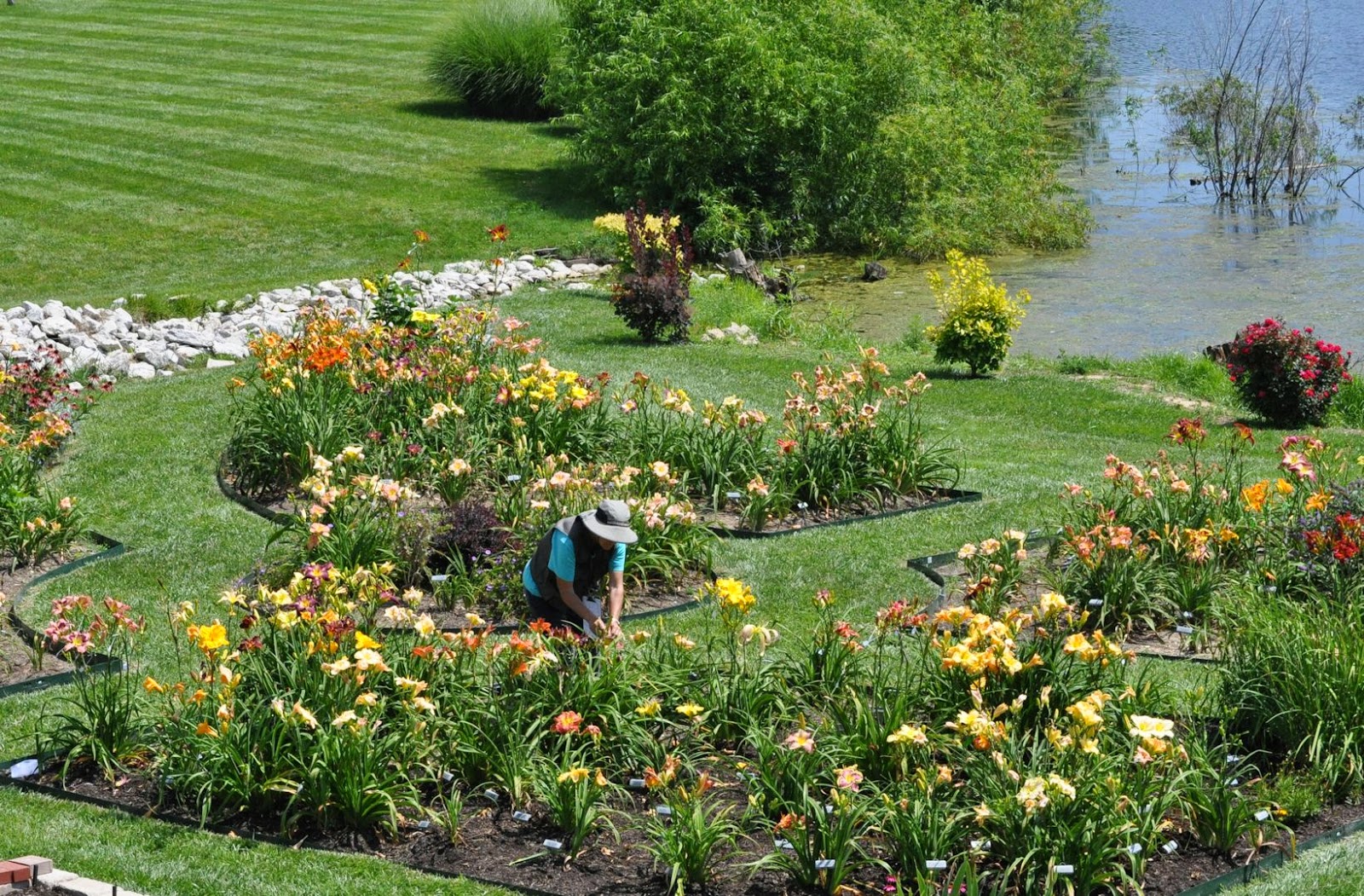 She was so thoughtful about the process that she never made a high number of crosses.  She ran out of time each day.  She was one for the proper equipment and clothing.  A shady hat, a vest from the Bass Pro shop with innumerable pockets and places to clamp things.  She worked at exploring the potential of various color combinations, always trying to make the most use of her favorite cultivars, FLYING TRAPEZE and WIZARD'S WAND. 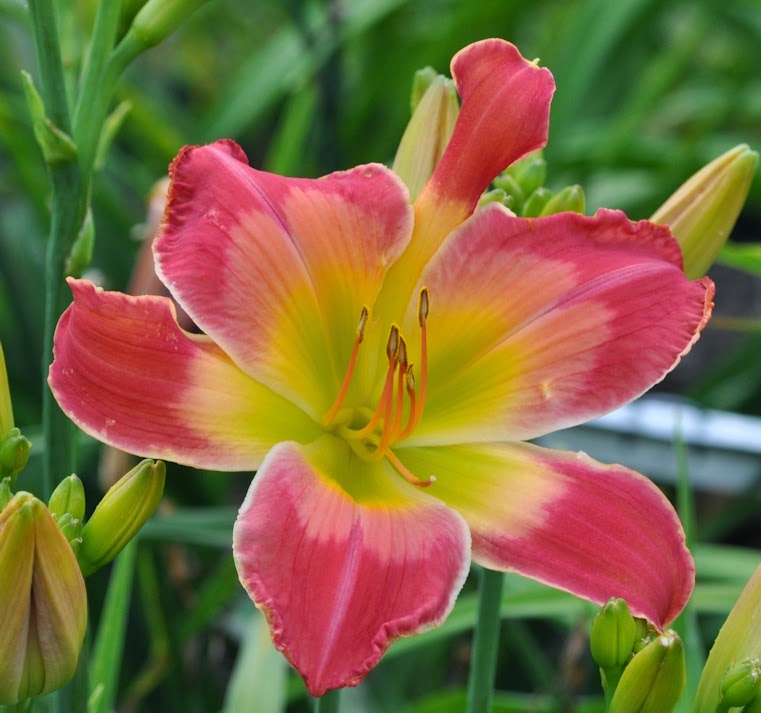 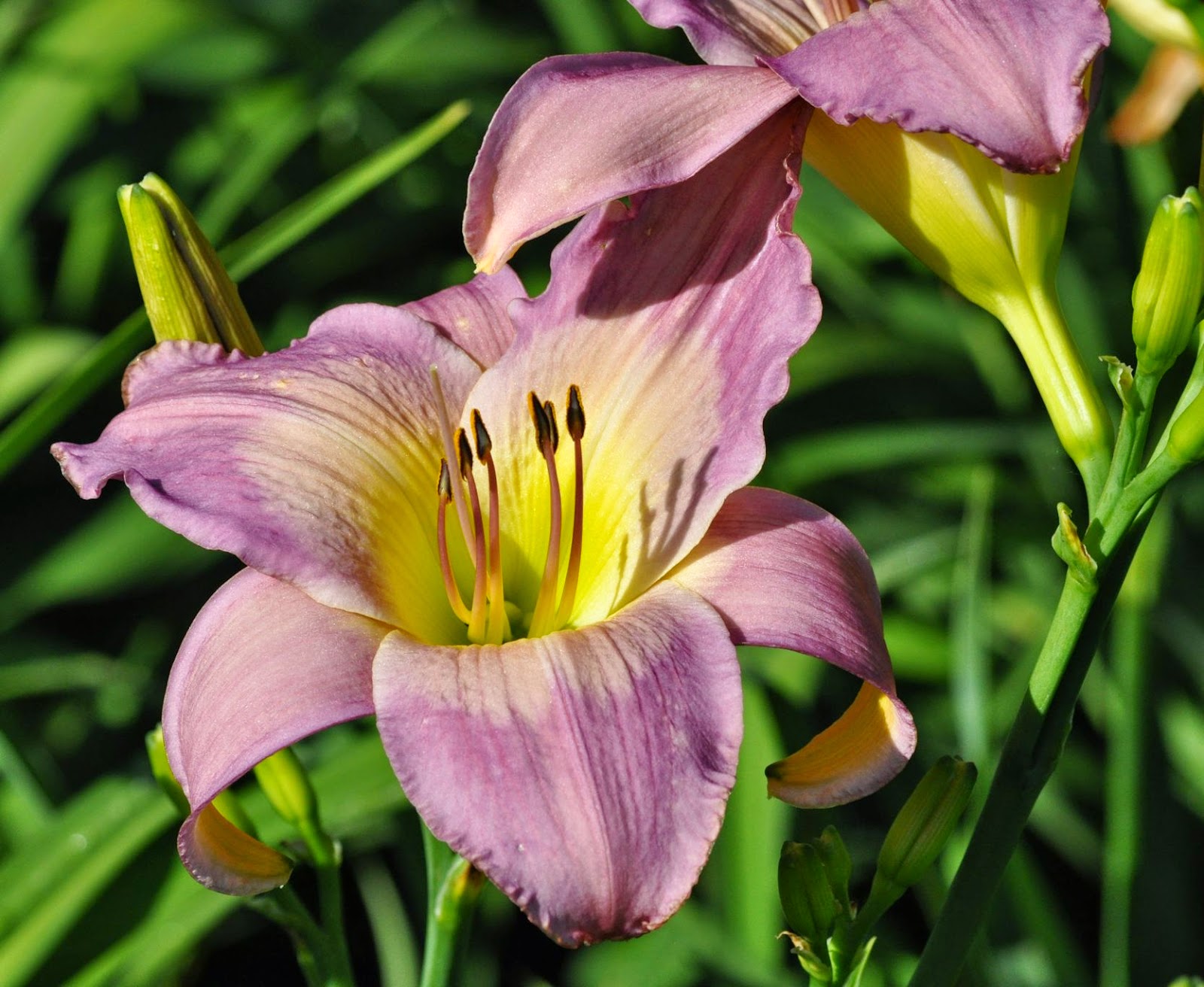 I planted Kathy's 2013 seedlings two weeks ago, when she was too weak to walk the property with me.  Today I spent the morning replacing the plastic labels in the seedling bed with sturdy metal ones.  I love the way Kathy worked at hybridizing; I love the plants she made.  I miss her like crazy today, when I would have told her about the growth of those new transplants. 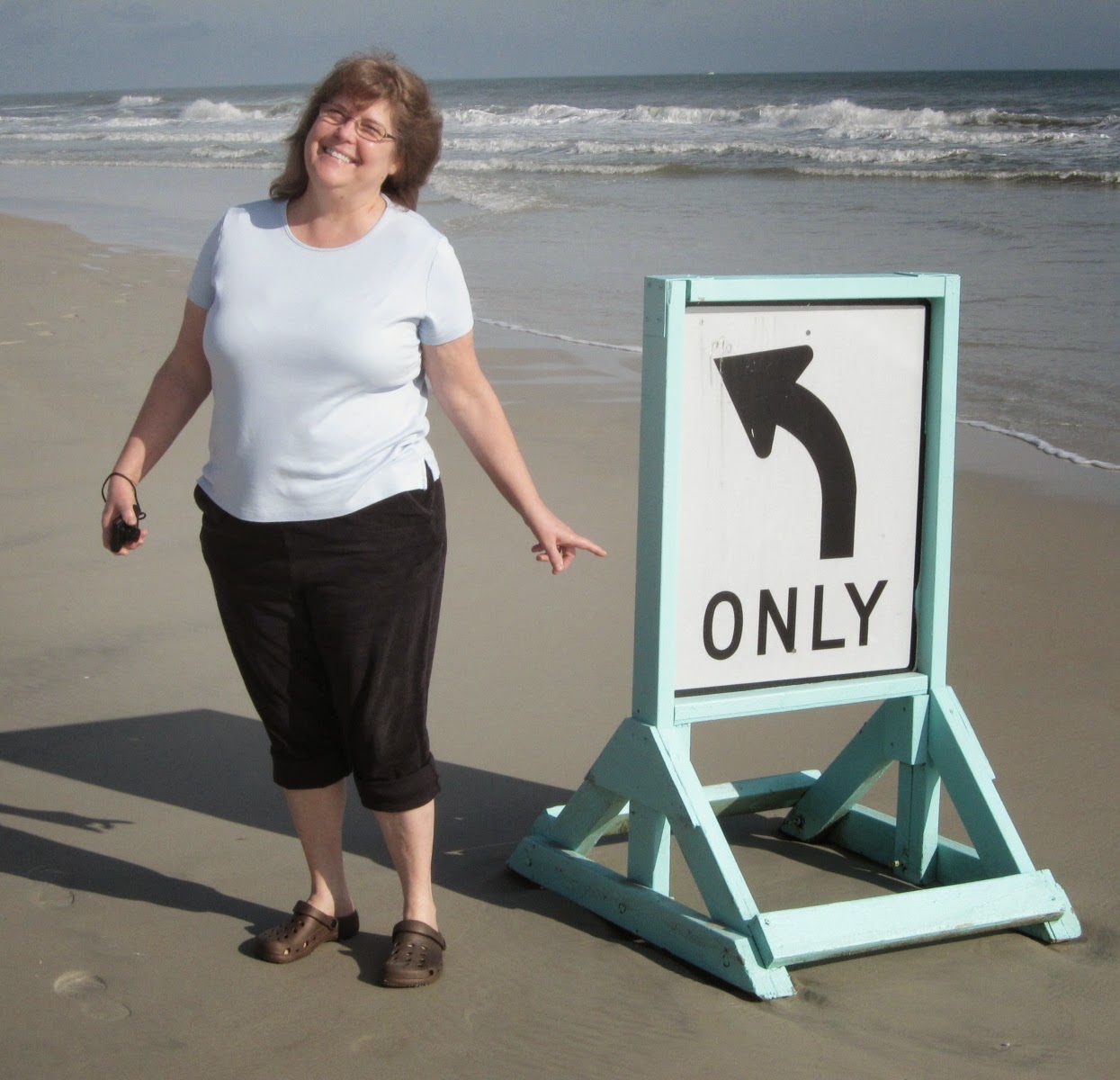 She struck poses for me wherever we went.  She knew I enjoyed her animation.  Here she is on the beach during our Florida trip in 2011. 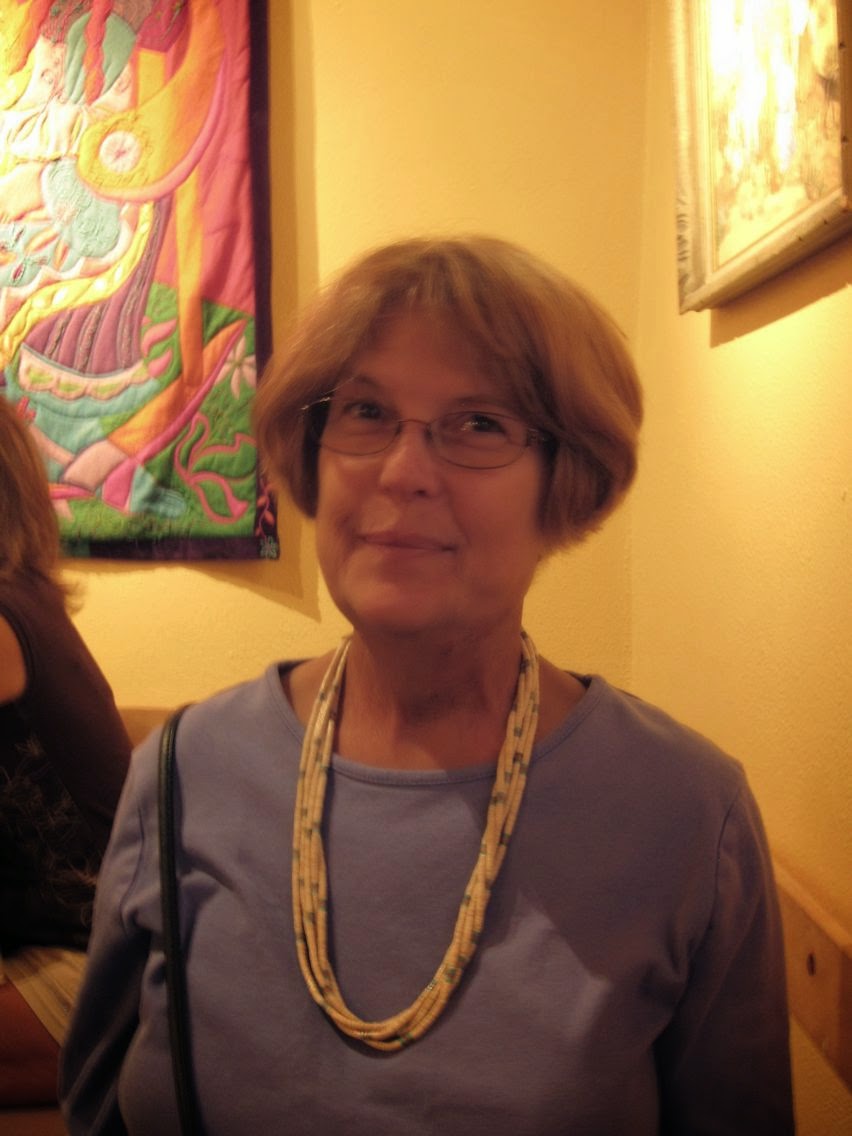 She struck this pose for my iPhone in Santa Fe a year ago.  She had lost about 60 pounds due to the difficulty of eating during and after radiation to the throat and neck.  But when this picture was taken, we believed she had been cured.

I love this pose from that Santa Fe trip. 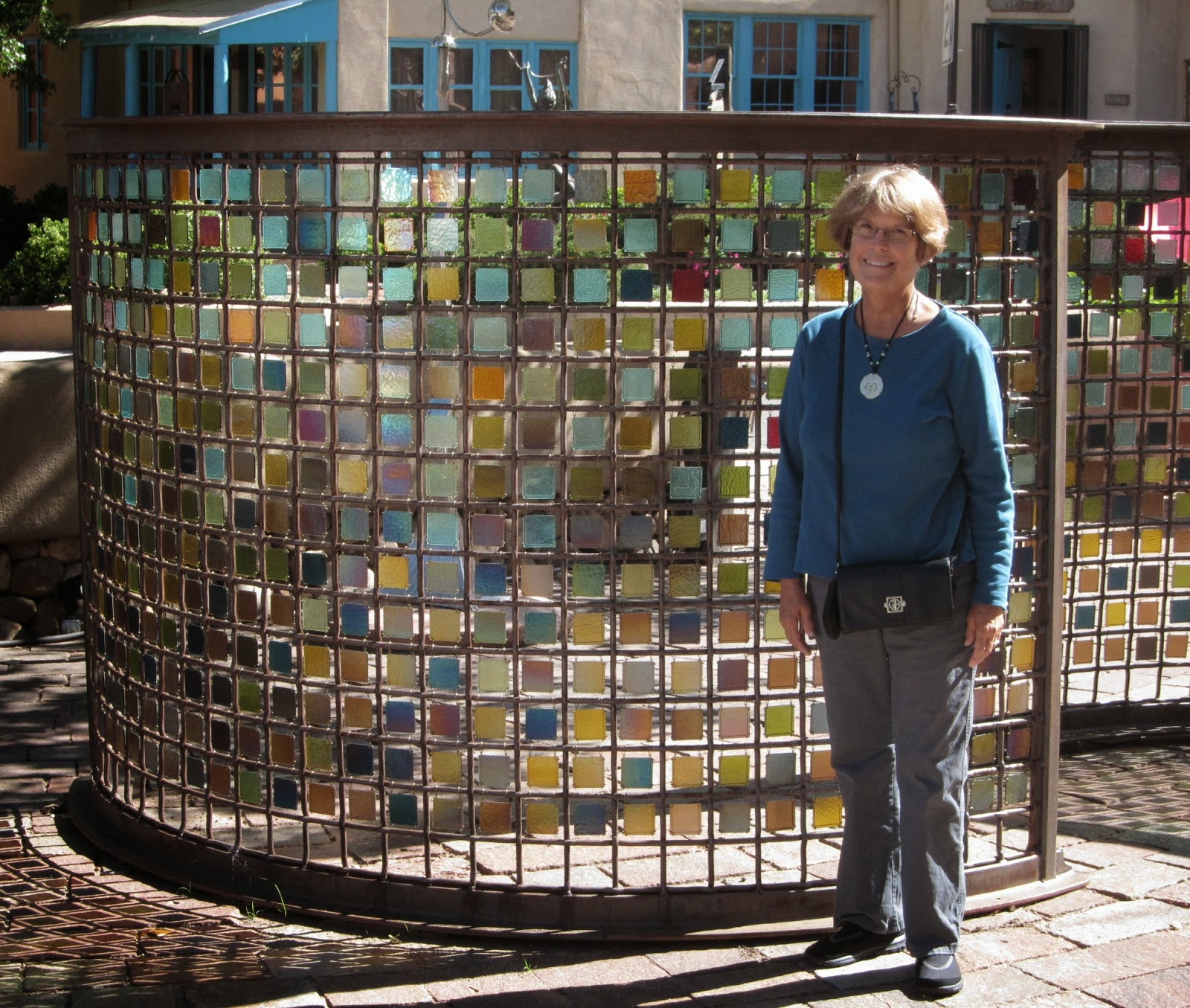 And then....  And then....
When she complained about pain long after she should have been pain-free, her ENT specialist ordered a biopsy of the "fried" node in her neck.  There were live cancer cells there.  He said, "I don't like what I see; it has to come out."  So at the end of October, he performed what he later called "the hairiest operation I have ever done," and followed the legs of an octopus-like tumor wherever it went and was confident that he "got it all."

Before this operation, Kathy asked me to take some pictures of her in case the surgery would disfigure her.  This is my favorite of the set, from October, 2013. 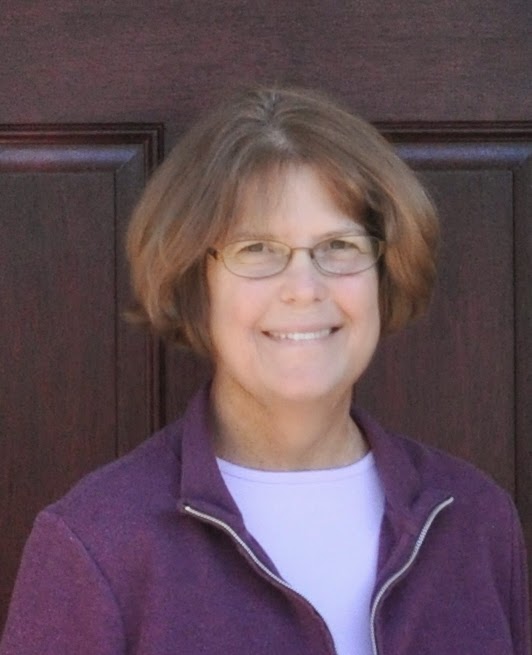 Oh, if only that had been the end of it.  But there was more cancer, this time eating away at her neck bones, discovered when she suddenly lost the use of her left arm on Christmas Eve. And so, from then until she died peacefully two days ago, we became a couple using our wits and ingenuity, and all our talents, to survive a killer condition.

It was not all-consuming, though it was a dominant feature of our lives.  Under that dominance, we wallowed in the joys we shared.  Kathy had collected all the Erle Stanley Gardner stories of Perry Mason, and she was reading her way through them and giving me the best for my bedside reading.  We grew up with that TV series in the 50s and 60s, and so we watched all the DVDs of those programs all over again.  We had loved the work of James Garner, beginning with the "Maverick" TV series, so I bought all the Maverick DVDs and we watched them starting in her hospital room in January when she was in for several days of tests and strategizing before surgery on her neck.

As we got to the end of Maverick, I bought all six seasons of "Have Gun - Will Travel" with Richard Boone.  We were on our second time through that series when Kathy ran out of life.

She set up a little "desk away from my desk" at her favorite Living Room chair, a little area of essential office supplies and a rack for storing her current magazines, books, and her tablet.  She used the tablet to read her daily newspaper after she lost the ability to hold up the pages, as in this photo I took at a Starbuck's a couple of years ago. 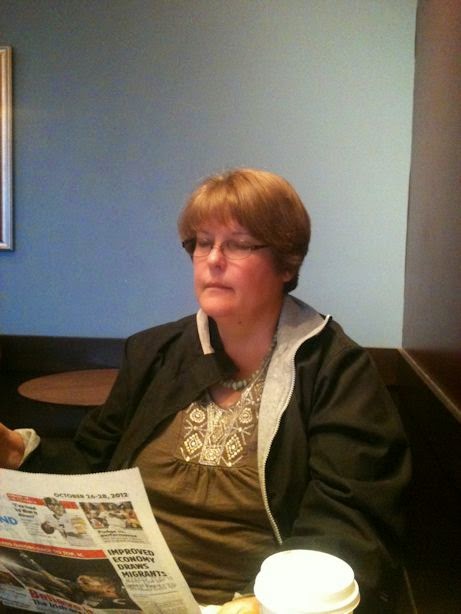 Yesterday when I went through her little "office" area next to her chair I found a doodle that I think she wanted me to come across on my own, a little light-hearted surprise. One of our running jokes had to do with Kathy's "recommendations" or "tips" about how to drive, do laundry, wash her hair, etc. etc.  I would say, "Thanks for the TIP!"  So I suppose she worked out international symbols for tips and reminders and tucked her doodle away for me to find.

Kathy was a great organizer of space.  She could hang pictures in a gallery, design home renovations or an entire house (she did this in West Plains), and equip her household with all manner of organizing supplies from the Container Store.  We moved into a thirty-year old house that needed a lot of work.  Kathy mapped out the changes in the windows, the floors, and the spaces of the house, including a total remodel of both bathrooms.  Here she is with our beloved contractor, Steve Brandt early in the demolition of the wall separating the living room from the two bathrooms. 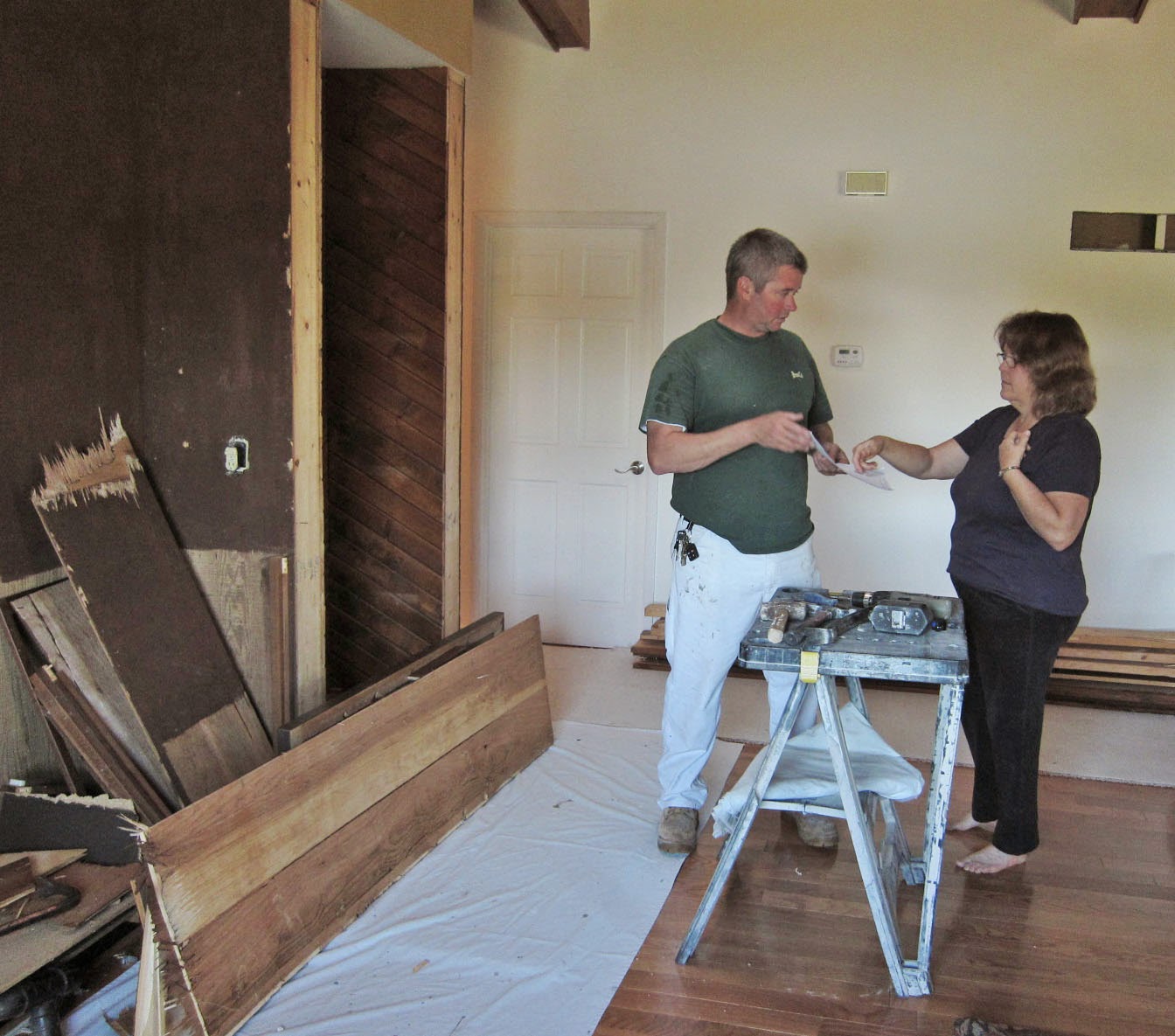 I fell in love with Kathy's nature, it's as simple as that.  I thought of her as the adult embodiment of the child on a hiking trip with her dad, one of my favorite pictures of her. 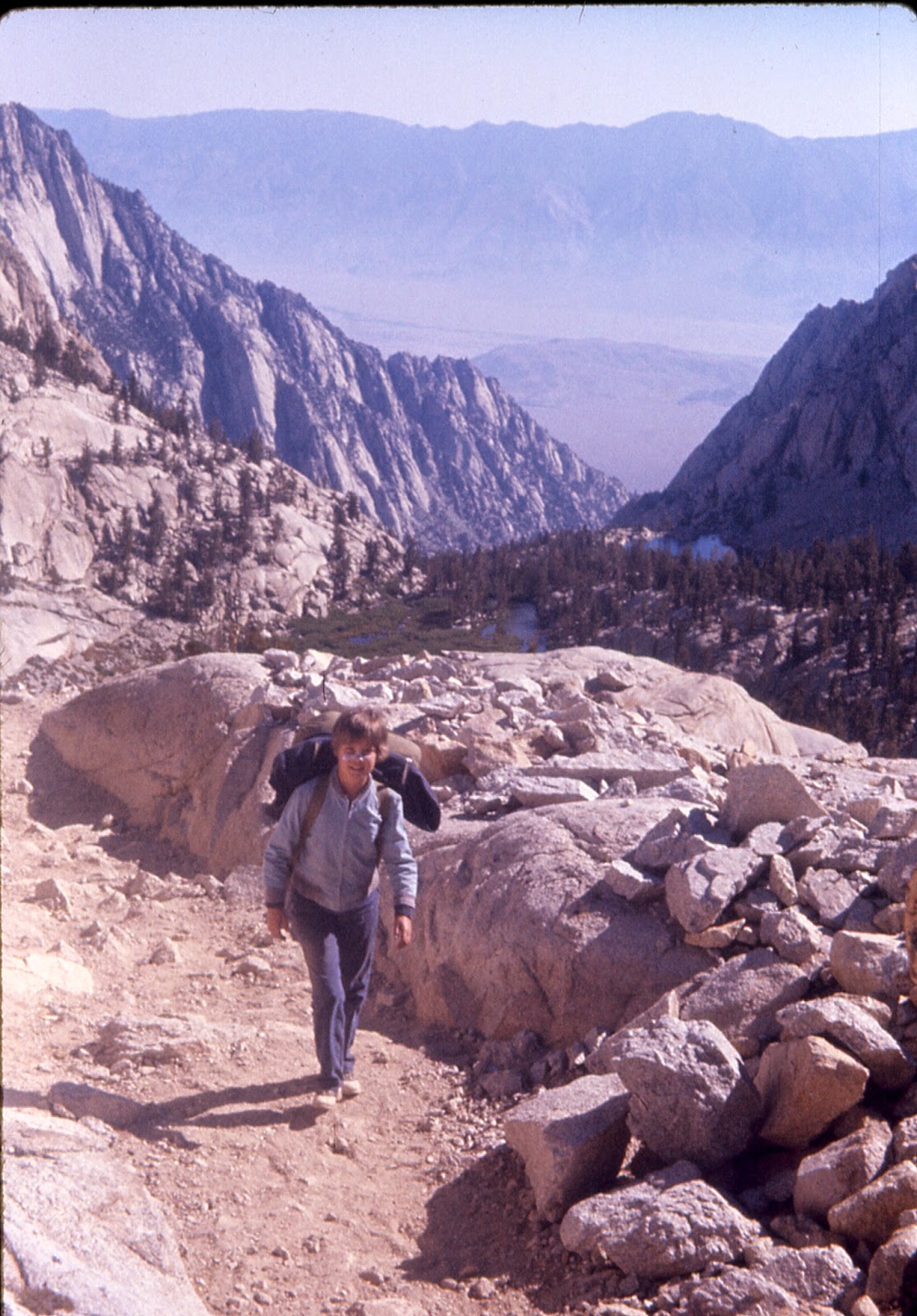 This vivacious ten-year-old was present in the adult.  She was hungry for life to her last day, when she allowed her death to complete its work while she rested.

I have resolved to honor her nature in all my days ahead, as I still honor San, who died in the summer of 2008.