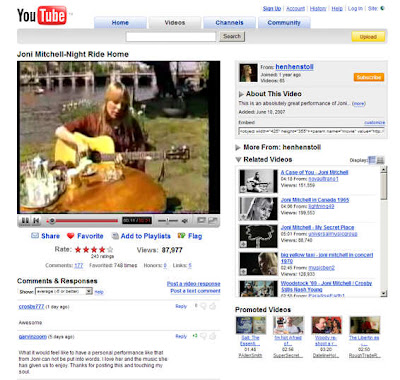 I prefer the style of Mike Reid’s Walk on Faith video from 1990. It’s like looking at a college yearbook for me. I knew Mike years earlier, when he was an All-American defensive tackle at Penn State and a classical piano major studying in Earl Wild’s studio. I was a few years ahead of Mike, but I saw him give impressive, piano-shattering performances in student recitals, and I watched him play pro football with the Bengals on TV. I had no idea back then that he wanted to sing and be a songwriter, so I treasure my CD of his music and this video of him in lip-synch with his recording. It’s a really cute montage of images, and it captures the Mike Reid I remember, though with a thinner neck and more hair than when he was a Nittany Lion!

p.s. If you liked that one, I think you'll have fun with another of the same era, Poor Boy Blues, with Chet Atkins and Mark Knopfler.