Breaking Up Is Hard To Do

This is a Western tale, the tale of "Coffin Rock," where bad things were turned to good from high noon to sundown.  There was no gunplay, or none I'll fess up to.

It all began a week ago, when I resolved to finish my season of digging in the daylily beds that would become Kathy's seedling area next season.  As I cleared out my own seedlings, I also tossed aside five- to twenty-pound pieces of "historic" highway rubble from the construction of Hwy 94 years ago.  The previous owner had called in for "fill" to correct the lowest part of the back yard.  He forgot to say "clean fill," so what was delivered became the curse and bane of the next owners' gardening hopes.

Along about five feet down the line of plants I was digging out, my spade struck something harder than a chunk of asphalt.  An hour's digging around the obstruction revealed a rough chunk of concrete the size of a coffin.

Named 'er Coffin Rock.  Here she is this morning just as Steve and Tim, our "resident contractors" arrived. 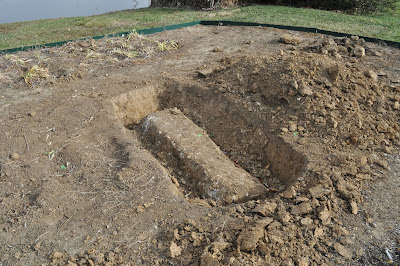 They knew what they would be up against, so in addition to Steve's tractor, they brought a jack hammer.  Here's Tim reducing coffin rock to a couple of pieces. 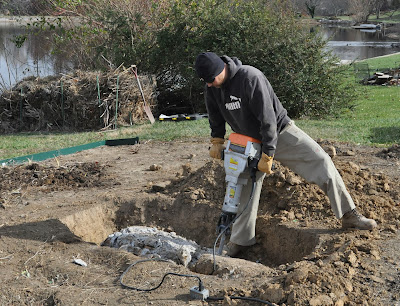 Each piece was too heavy to heft out, so the backhoe came into play. 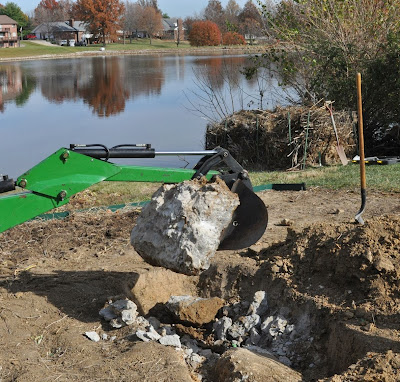 Then Steve set about gouging out more stones and rubble, some the size of baby elephants. 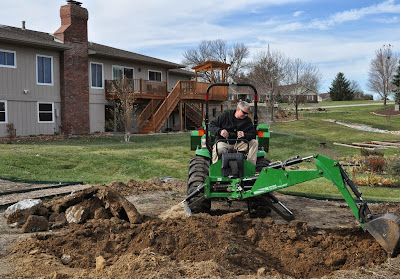 He was relieved when I told him he only had to clear the area to a depth of 12 inches, because the rubble field went way, way deeper than that.  You can see the pile of "artifacts" from the Hidden Lake Rubble Museum on the left side of the picture. 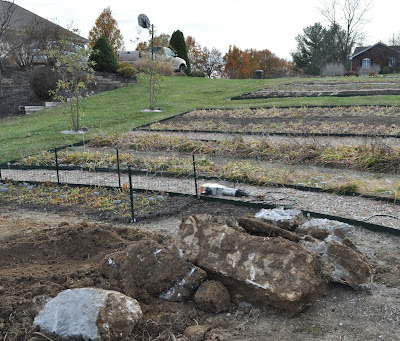 I suggested that if they found any skeletal remains in the concrete, they treat them discretely, using the lake as a reference area.

Things got a bit less bulky, and Steve switched to the front-end gouger or whatever you call it. 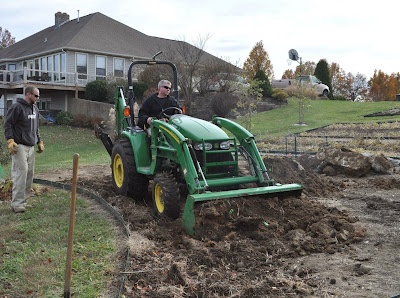 Work proceeded at a brisk pace.  There was not much moisture in the top twelve inches of the dirt. 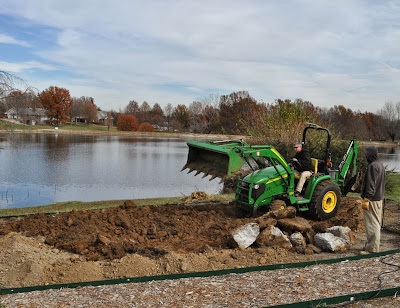 I was relieved that they were able to get this ground in shape.  Hand-spading would have taken time I don't have at this point in the cooling season.

As Tim rough-smoothed the dirt, Steve went up for bucketloads of leaf compost sitting in a great pile in our driveway. 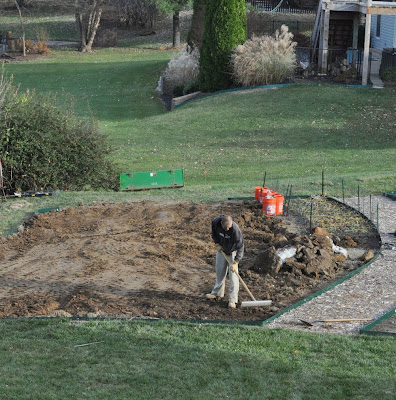 I don't know how many wheelbarrow trips this area would have required, but I think it took six visits of the tractor. 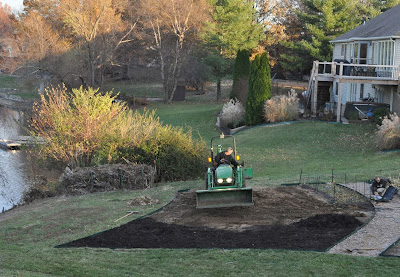 I could smell the "tobacconist shop" aroma of the hot compost up on the deck. 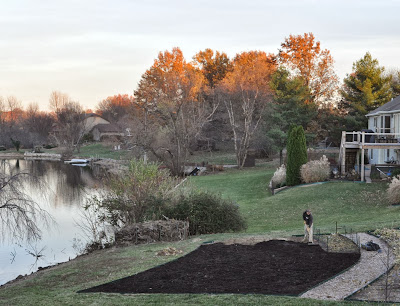 Things timed out pretty well.  Just past sundown, about 4:45, Steve dropped the last bucket load and the two men tapped the metal edging back into place and left for the day. 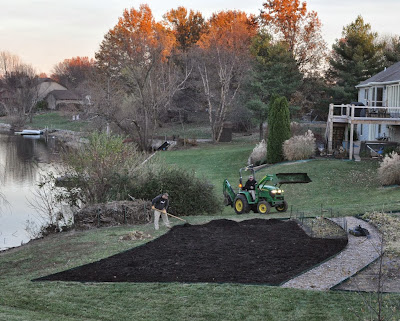 The layer of mulch is one to three inches deep.  It will be good earthworm food.  In the spring I'll till it into a strip of ground where Kathy will plant her seedling crop from this year's hybridizing.  Good night, Garden bed.  Good night, Coffin Rock.  I hope I never see the likes of you again.
Posted by Seeker at 5:21 PM 4 comments