Holmes, Holmes on the Range

I've known Mike and Sandy Holmes via email since early in 2011, when I got involved in testing and working on the help desk for the AHS Membership Portal, a participatory web site for daylily lovers who are members of the American Hemerocallis Society.  Mike and Sandy were the keystones, if there can be more than one, on the design and technical side of the project.

Yawn, I hear you say, so here's a picture to get things rolling.  This daylily is numbered C860.  I saw it in the Holmes garden on July 12 during an added day of garden touring in the Dayton area before the AHS Convention kicked off in Columbus.  Mike and Sandy are both fine hybridizers, and I wish I could say which one of them created this beautiful seedling which was marked in the garden for awards judges' consideration for the Junior Citation Award. 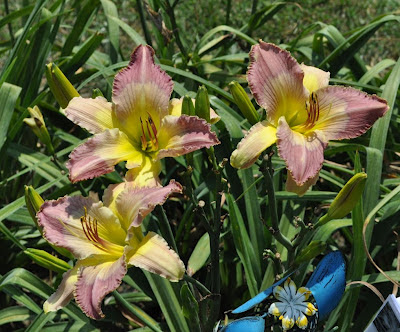 The J.C. award is reserved for distinctive seedlings of exceptional merit in every observable regard.  It requires the vote of ten awards judges, who are advised in the voting rules to "walk on by" and stop evaluating if they can't say why the seedling is distinctive, meaning something that represents an advance in hybridizing daylilies.

It's not just the color, form, or pattern on the flower.  There may be distinction in the health of the plant's foliage, in the spacing and number of branches on the stem, on the apparent rate of increase, or on the "floral presentation," which is what got my eye when I took this picture.  Three flowers open in the same visual plane without crushing each other.  Good color retention on a hot day after lunch.

I'm sure that more than ten judges saw that seedling on the day I was there, so it will be interesting to see if it pulls in the votes.  There were other fine seedlings up for J.C. votes in the Holmes garden as well as in the Polston garden earlier in the day, so we judges had a lot to remember and consider, not to mention the seedlings we see in our own regions.

Here's a look at Mike and Sandy's "plantation" as I stepped off the tour bus. 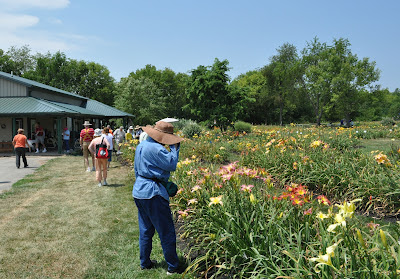 An even larger area to the left of this picture is planted even more densely with named varieties and thousands of their seedlings.  I envy photographers who are able to position themselves instinctively to get the front of people rather than the back.  I hardly ever do!  That's Keb (my wife Kathy) on the far left side of the picture in the orange top.  I can tell by her posture that she is on a mission to see as many examples as possible of the sort of daylily she started hybridizing this summer...large open forms with great color on tall scapes.

I stoped to admire the color on "C1485" and noted that it blooms in a way that gives me multiple perspectives on the form of the flower. 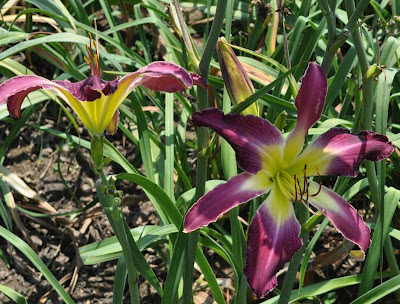 The one below was labeled "SD156 Best," so I suppose SD156 was the number assigned to a particular cross, and "best" means this one is the pick of the litter.  I confess I wanted to grow every marked seedling, but I doubt every one will make it to registration.  They've got so many winners here that they can be very picky. 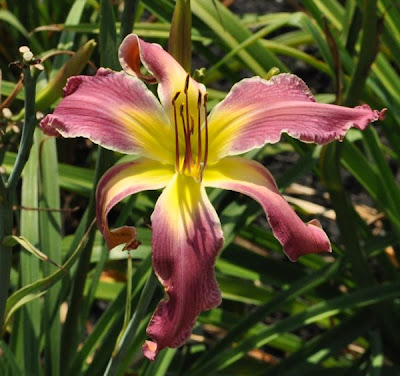 Here's some "landscaping" to provide a break from optic overload. 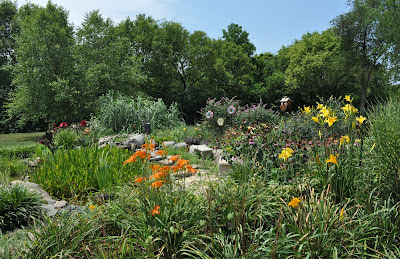 I wish there had been time to savor the details of this, but there were too many good daylilies to see, and I barely scratched the surface before the bus captain blew the departure whistle.  I did happen to notice, back under a shade tree, my friend David Kirchhoff, who was offering refreshments to the visitors.  Susan Okrasinsky took this picture of David and me as he pointed to where I had to go immediately and see "the blue daylily," PIGMENT OF THE IMAGINATION by Ohio hybridizer, Richard Norris. 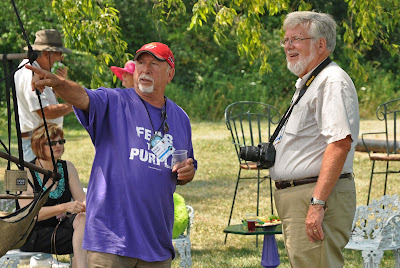 Here is Richard's astounding flower.  It changes color during the day, but I think I saw it at the maximum illusory moment of "blue." 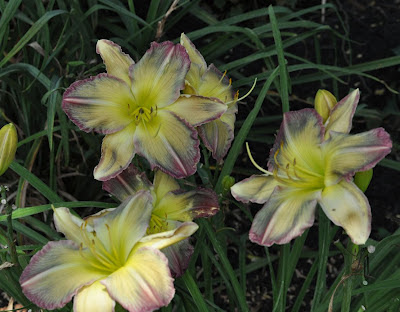 Mike and Sandy sell their registered daylilies, and the garden had signs in front of what was available.  Here's IMPRESSIONIST SKY. 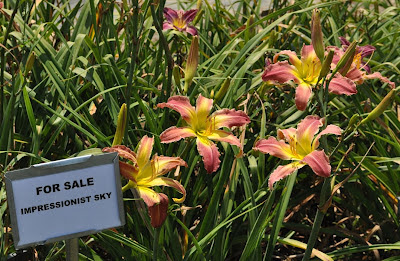 Here's SORCERER'S MASQUERADE.  You can see how the exceptional Midwest draught has burned the foliage on some of these plants.  I imagine untold thousands of gallons of irrigation water have been lavished on these beds to help the plants bring their seed pods to maturity as well as keep the garden attractive for visitors. 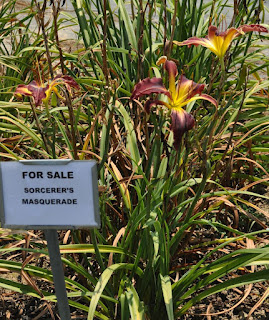 Smiles wherever you look.  Here's a tree of bottles to go with bottle bushes.  In the background, the bus is waiting, and I'm late!  Thanks Sandy and Mike! 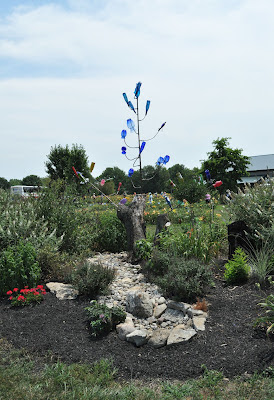