Style and Story in a Christmas Narrative 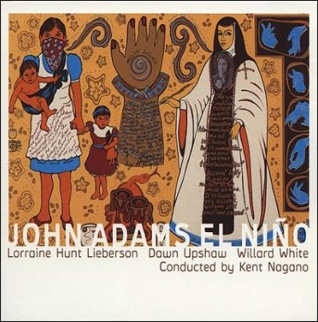 I wrote a piece last year, “Suggestive Pacing,” about the way the style of telling a story seemed to fit the story. Cormack McCarthy’s The Road was the object of my attention. I had never read any other examples of McCarthy’s work, so I formed the mistaken impression that the style of storytelling in that book was a unique stroke of genius. Later, when I read four other books by him, I understood that McCormack told all the stories in that style. It was accidental that the style seemed so apt to the story of The Road.

Now I’m engaged in another process of sorting through style and story, this time in a wonderful and challenging piece of music for Christmas titled El Niño. It’s an oratorio by America’s foremost composer, John Adams, who may be best-known for his “minimalist” opera, Nixon in China. The libretto is constructed of disparate sources, Biblical and otherwise. The emphasis of the work is a feminine perspective on the sacramental nature of conception and birth. To carry this theme through the work, Adams has chosen a group of poems by women who wrote in Spanish.

The overall effect is magical, but there is a stylistic challenge for the listener in the opening movement. That challenge is what prompted me to consider style and story again. As I thought of “barriers to understanding” in that opening section, I had to consider the challenge the composer took on as well. John Adams wanted to say something about the great mystery and divinity of all births by connecting the Christmas narrative with the present day.

I didn’t think of “barriers to understanding” until I played the opening of El Niño for my colleague, Patricia Zahn, during a drive to Hannibal a couple of weeks ago. A trip to Mark Twain’s town and the site of great stories…what better occasion to tell Patricia about Adams’ treatment of the Christmas story? Imagine us in the car now.

I tell Patricia about the minimalist technique of deconstructing a text, breaking it down to syllables, individual words, short phrases, and strewing these pieces of language as tossed confetti, or nuclear fireflies, or a swift immersion in madness. I tell her of the effect of a tsunami of sound at the moments of God’s presence in the story. Then I offer to play her the opening movement on the car stereo. She is eager to hear it.

And when she does, she is perplexed. I allow the recording to continue from the disorienting beginning to the strange quietude and clarity of the sung narration that follows the first big section. I sense her unease, then, and turn it off. The first word that comes to her mind is “annoyance.” She thanks me for preparing her for the experience. I imagine if I had not, she would have begun to look for a way to leave the car without injury!

Her reaction made me wonder why Adams would begin such an important story by subjecting the listener to an experience of incomprehension. There is a beautiful poem there; why would he deny the listener a chance at hearing how the words add up to a poem? Even after many hearings of this opening section, the most attentive listener will have no way of knowing the text. Then I realized that in performance, the listener has a printed text, either in the program or in projected supertitles. I thought of this printed text as a sort of “scripture.” The listener is placed into a relationship with a “scripture.” This is where style and story come into a relationship probably unintended by the composer.

“Why did you do this?” says Joseph to Mary later in the oratorio. It is a good way to approach the opening movement that so disorients and mystifies. I don’t know why John Adams “did this,” and it would be folly to think that I could read his mind. It is not folly, though, to observe what he “did” and then to think about how his choices are helpful, even miraculous, in making this well-known story fresh.

Here is what happens at the beginning. Instantly, simultaneously, I hear reminders of musical ideas from a long tradition of classical music. I think of obstinate rhythms in Stravinsky’s Rite of Spring, the Latin American polyrhythms and the harpsichord of the Missa Criolla of Ariel Ramirez, the jiggling violins and cellos from one of Bach’s Brandenburgs (which one???), the twinkling down of baubles of bright tones as if overlaying this hubbub, but in exotic scales; the gruff, irregular, huffing pronouncements from low brass, like the weight of received wisdom from a gang of old farts, or of encrusted church doctrines taken for granted; all of this with unflagging energy and momentum.

The experience is “layered” and evocative of Charles Ives, who imagined the effect of hearing several bands in a town parade, one near, the other blocks away. Mozart had imagined this too, in the 18th century, in the ball scene from Don Giovanni. There are three small orchestras at the Don’s ball, each in a different room, playing for a different class of people, each playing in a different meter, and we hear them all at once.

The opening might seem pure chaos if not for the sense that it moves forward on the back of Jonah’s great whale, or on the great plates of the earth’s crust, which I think of when I hear the basses and cellos of the orchestra move from the one note they’ve sustained to its adjoining neighbor up or down.

This sense of “harmony” is in no way ordinary, yet it is sensed as a product of intelligent design; an extremely disorienting, counter-orienting experience is managed through intelligent design. I find this fascinating.

I give you the story of Mary, unwed teen mother, and her incredulous, humiliated, enraged, disappointed fiancée, Joseph, trying to judge their proper course of action in unbelievable conditions, and we listeners are a part of that story if we can resist the impulse to escape it, and what it may imply about what is important.
(The St. Louis Symphony Orchestra and Chorus will perform El Niño on December 13th and 14th, 2008.)