Last Thursday morning following a sublime visit to Bob Faulkner's garden, our bus took us to Jeff and Karen Pansing's Majestic Gardens.  The Pansings live on a "century farm," six generations in one place, and it's a beautiful place to live and raise a family and grow pumpkins and mums and daylilies.  Here is one of their pictures of the huge daylily plantation in full bloom in an average year. 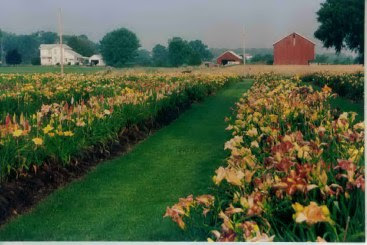 Back almost twenty years ago, when I was first ordering daylily catalogs and building my garden, the Majestic Farms catalog was one that I pondered and memorized.  I knew this was a big operation, so the chance to see a farm that helped form my consciousness of daylilies loomed large in my imagination.

The bus pulled into their property, Jeff came aboard to welcome us, and we heard about his three irrigation wells and fifty thousand gallons of water per day not being any match for the draught.  I looked outside and saw his pile of pots for the mum trade.  It's hard to imagine the hours of potting that go into making a business of mums. 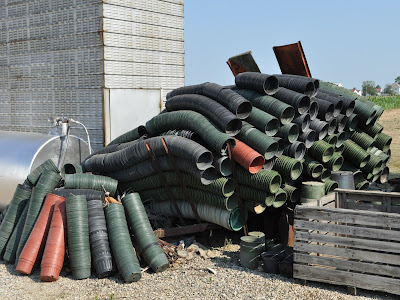 We walked just a little ways to the left of this scene and entered a tranquil yard that looked out onto the daylily fields. 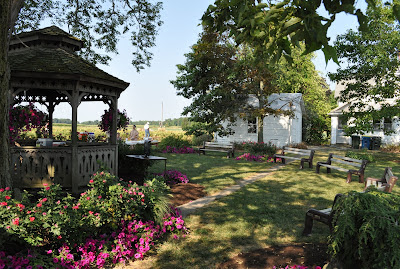 As I snapped this picture I could hear the goats in their pen.  I turned to look at them again and saw my friend, the hybridizer Margo Reed, saying hello.  I include this picture of her with her permission. 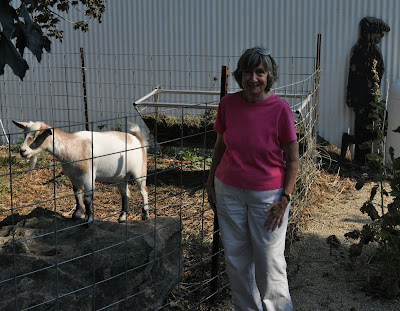 Animals or statues of animals made for a lot of small delights at this convention.  To the right of this scene is the door into the Pansing daylily greenhouse.  I looked in there and saw a concentration of seed pods such as I've never begun to see in my own garden. 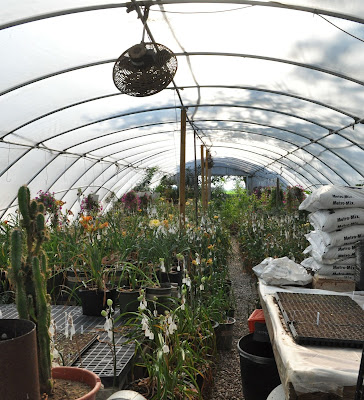 Jeff said it had been a real struggle to keep the temperature down to a safe level.  Fortunately for us tourists, this was not a scorching day.  The shade of the yard was calming.  The unrelenting sun awaited anyone who walked the rows of the daylily garden.  But that's why we came here, so walk we did.

The peak of bloom season was past, that was clear, and the water had been rationed to keep the nearest beds, the ones with seedling crops, watered adequately. 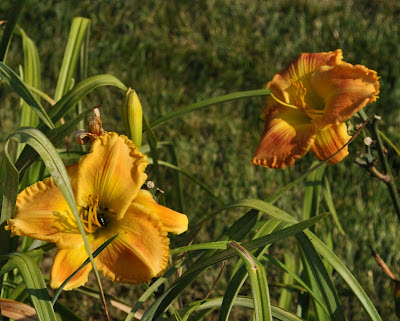 These plants were doing well, and the blooms were full-sized and colorful.  There was actually a lot to see. 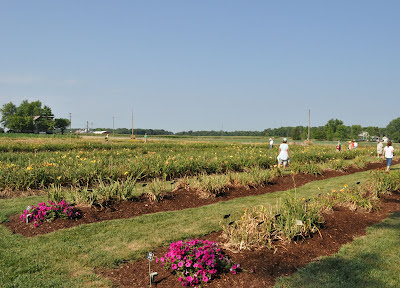 The gardens were meticulously weeded and mulched, and we could walk several long rows and never think of the terrible dryness and heat that is crushing Midwest agriculture right now.

But not too far out, I found the line of demarcation between what had been watered for our visit and what had been sacrificed.  It is hard to gauge the economic impact of a draught on a daylily business like this.  Much of the business is conducted in May, when the rains are greening up the plants.  There are virtually no sales or mail-order in the month of July.  Even in the North Country, zone 4, people generally stop buying garden plants on the fourth of July.  This row of MINNIE PEARL is likely to come back to life toward the end of summer.  Right now, though, it's a sight to make you sympathize with farm families everywhere. 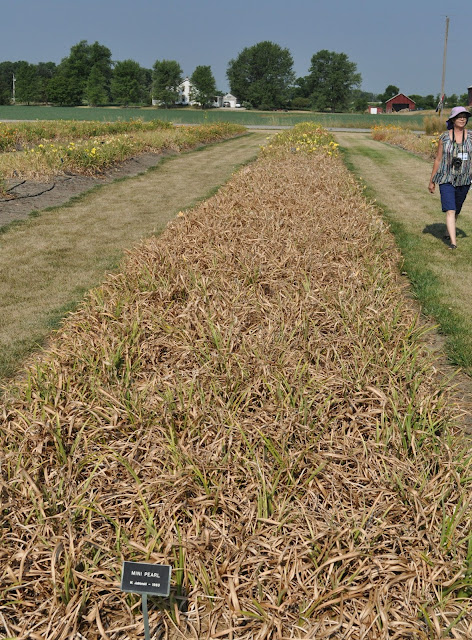 You can see some green in there, some remaining sign of life.  I took this picture because I remembered seeing MINNIE PEARL at the 2000 National Convention in the Delaware Valley area, in the garden of Stu Morton.  I don't think I'd ever seen such a perfect clump.  Most of the convention-goers agreed with me, because that daylily won the President's Cup for best cultivar at the convention.  Here's what I saw that day twelve years ago.  Here's what MINNIE PEARL can do when it has good soil and good water. 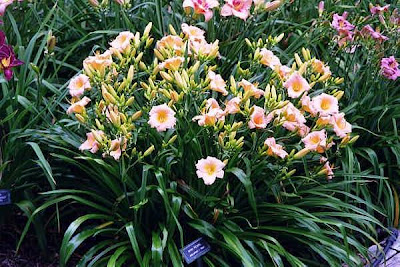