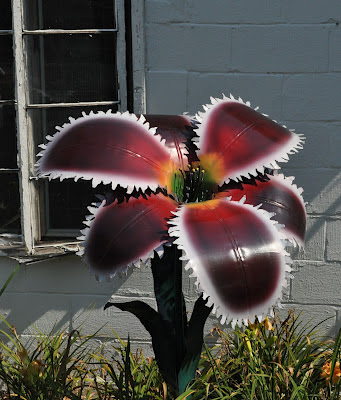 For years and years I have seen the name "Polston" on gorgeous daylilies in tour gardens here in Missouri, and in Kansas and Oklahoma -- "Region 11" of the American Hemerocallis Society.  I learned that Tom Polston was one of the noteworthy breeders of daylilies in Ohio, but until last week I didn't know that he and Doug Sterling also breed Cyldesdale horses.

This is the only Tom Polston daylily I grow currently, DRAGON EMPRESS, photographed in my own garden this year on June 24.  It's a fine example of one of his major breeding goals, which is to put the voluptuous form the deep-south breeders are known for onto hardy northern plants. 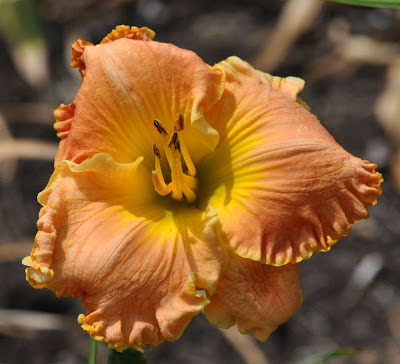 Tom is probably better-known these days for his daylilies with toothy edges.  I think the dragon sculpture near his seedling beds is meant to affirm that. 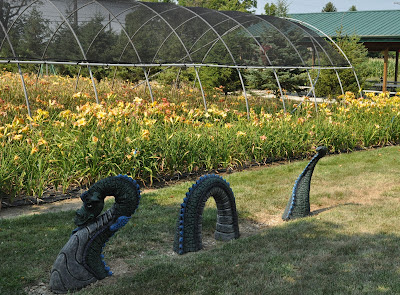 We saw his garden a week ago Thursday as part of an extra day of touring at the National Convention of AHS - the American Hemerocallis Society.  All the official tour gardens were in the vicinity of Columbus, where the convention took place.  The bonus day of touring took us southwest to the Dayton area.

I wonder if the metal daylily sculpture at the top of this blog was inspired by this seedling: 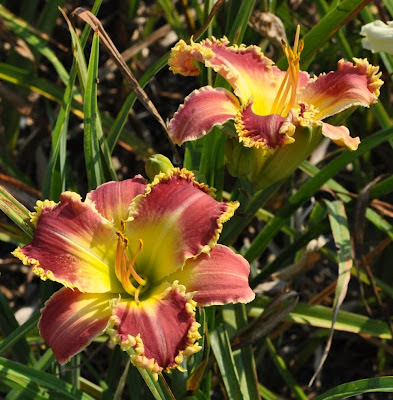 There were a lot of seedlings like this.  Tom had stuck blue flags in the soil next to the ones he will dig out and save for further evaluation.    I became absorbed in trying to follow his thinking as I compared the flagged ones with the unflagged.

I surmised that he is outcrossing his lines with the best toothy daylilies by other breeders.  Here is Jamie Gossard's HEAVENLY BOMB SHELL. 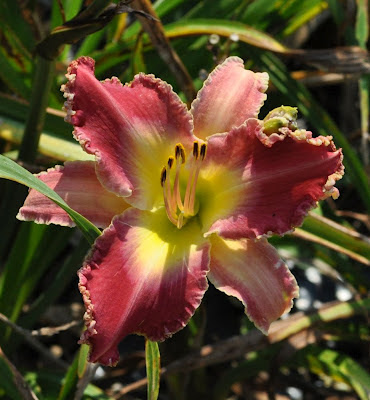 This is Karol Emmerich's GNASHING OF TEETH: 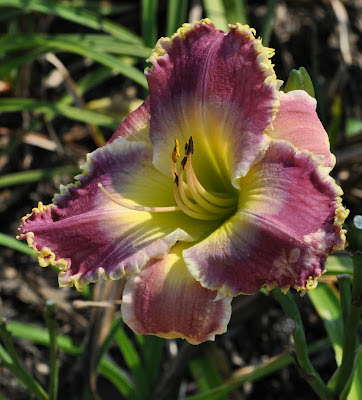 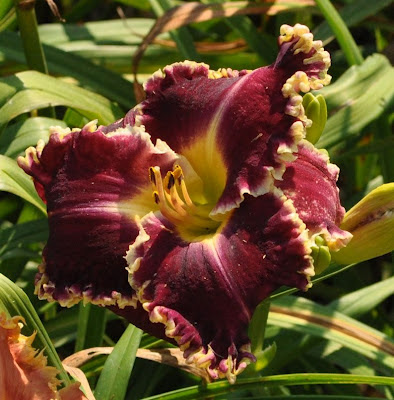 The seedling below was prominently displayed "under number:" 12-JTP-111T.  I'm guessing JTP is Joel Thomas Polston and that the letter T at the end designates Tetraploid genetics as opposed to Diploid, terms that only hybridizers need know about.  The fact that one daylily may have four sets of chromosomes (tetraploid) rather than two has nothing to do with whether you'd enjoy the look of the plant in your garden. 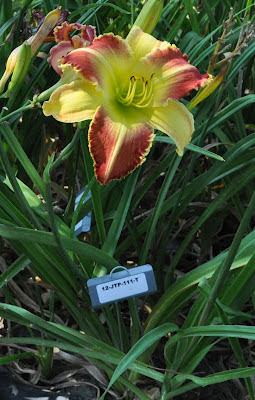 I stopped several times to look at seedlings without flags that seemed to have clearer color than more toothy seedlings with flags.  A wild guess makes me think this is from a cross involving something of Karol Emmerich's, many of which have amazing frosty edges.  I imagine this wasn't flagged for several reasons: (1) it looks like somebody else's work; (2) it doesn't have the dramatic edge the flagged ones exhibit; and/or (3) it's low-growing. 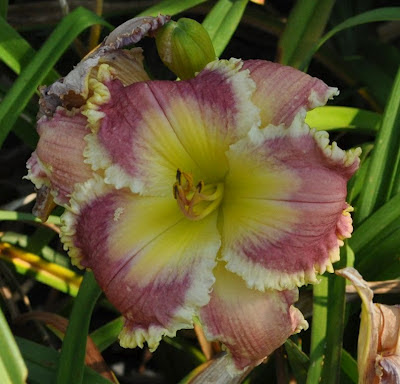 The flagged keeper below has that "southern belle" look on a northern-hardy plant.  I love the powdered salmon bisque pink color, the sculpting coming out of the lemon creme throat, and the bubbly ruffled edge. 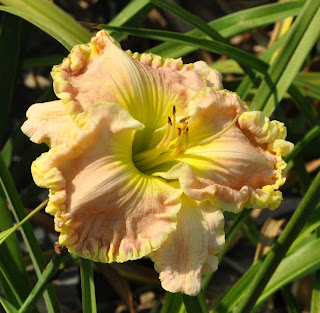 With thousands of daylilies calling for attention, a guy can go on optic overload fast, so after my inspection of the new keepers, I savored the landscaping around the other side of the 1848 house. 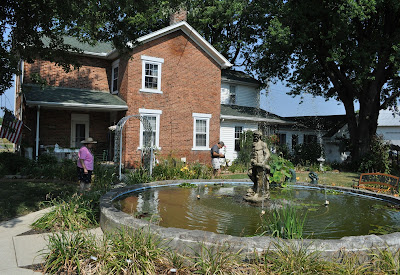 This side of the house is about beauty.  Shade is welcome on this side, and so is flowing water.  As you approach the addition to the house, you notice features of the private life (the public life is on the other side where sun in full strength feeds the daylilies).  Here in the private area is a small Japanese feature such as I'd like to put in my own back yard.  Here it is placed in perfect balance with everything else. 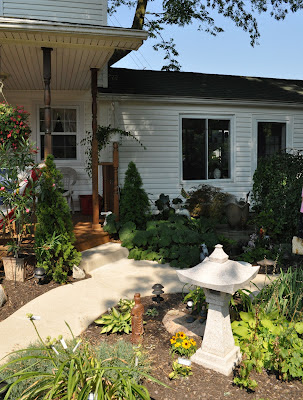 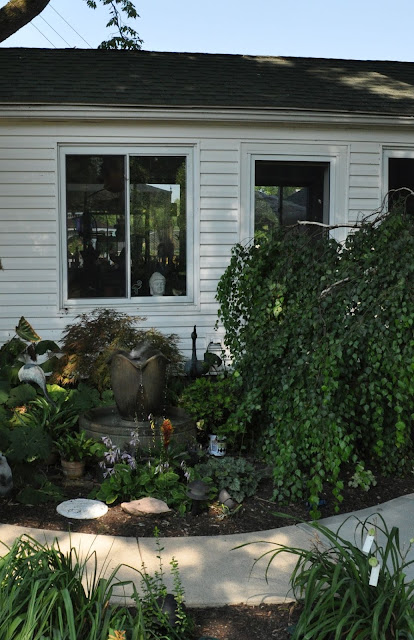 Up close to the addition is a really nice sculpture and water feature situated with outstanding variety and harmony.  The gentleness of this garden adds dimension to our sense of the hybridizer who is pursuing an interest in the big, bold, and jagged. 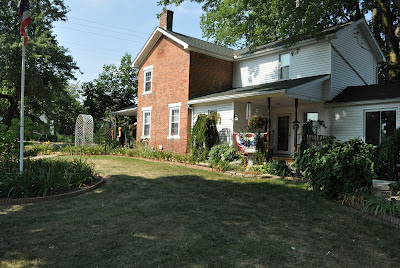 I probably spent more time in this tranquil zone than out in the blaze of color and the riot of teeth, or maybe I didn't.  I fed my mind on the sunny side and my soul here in the shade.  We all probably wished for more time at Pleasant Valley Gardens.  As it was, I never went to look at the Clydesdales close up!

As Tom bid us goodbye, I wished I'd stopped taking so many pictures and gone up to tell him how much I enjoy DRAGON EMPRESS.  There will be more of his daylilies in my garden next year. 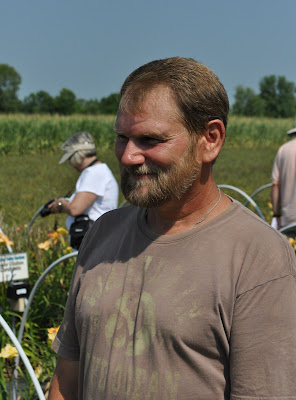