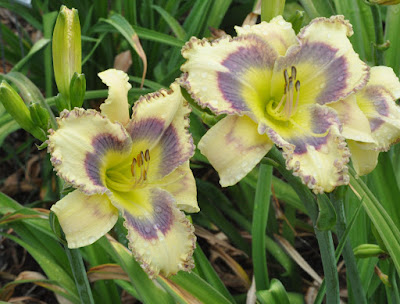 A family memory has prompted me to register this hybrid daylily with the name Clamdigger Blues.  It's one of nine new ones I'm introducing in 2019.  Its parents are named Footprints in the Sand and Pleasing to the Eye.  Clamdigger Blues is "beach sand white" with a sandy lavender eye and a hemstitched edge of lavender and cream.  I suppose the hemstitching led me into the memory I'll tell you about.

My mother grew up knowing her way around a sewing machine, and I imagine she mentored my younger sister, Chris, though I have no memories of how Chris learned to sew. When we got into our teens Chris took off on a trajectory that would lead to a college degree in fashion design and a passion for interior decorating.  As she began this trajectory I thought her taste in fabrics, patterns, and colors was off-the-wall crazy.  What I didn't ever realize was that my own taste was even more strange and bizarre than I thought hers was.

Fortunately, only two family pictures show the shirts I wore in junior high school.  This is my 9th grade class picture taken in the fall of 1959.  I'm trying to look like Fabian, the singer who couldn't sing, and the shirt is a glittering satiny silver blue unlike anything anyone else wore. 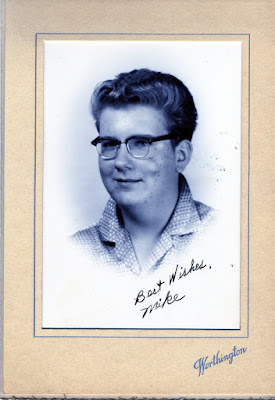 I was an ugly duckling posing as a hep cat until I entered high school, when I began to wear ascots to school and styled myself in a manner resembling wealthy middle-aged men in the fashion ads of the New York Times Sunday Magazine.

If any pictures of me in those clothes ever existed they were mercifully suppressed.  What remains are tame by comparison.  Here's one of Chris and me wearing "clamdiggers," a style of summer pants that were the rage in the summer of 1960. 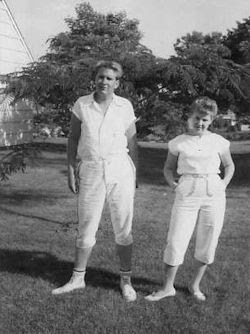 We're both posing, Chris more effectively.  We both wore what we wanted to wear, with never a word of criticism from Mom and Dad.  Here's another picture from the same summer on a different day. both posing. 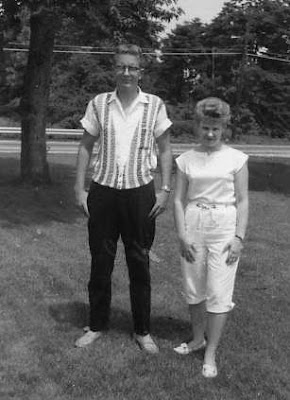 We were fortunate to have loving parents.  They believed we would be "called" to one path or another in life and that the voice that called us deserved respect.  And so we followed the paths that called to us, whatever they were, however many of them unfolded ahead of us. 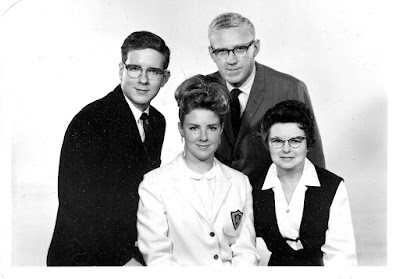