Things Are Shaping Up Nicely

My title is taken from a the mouth of a character in one of the novels of the French author, Colette, who I remember reading during the summer of 1977 after I moved to Vermont to join my life with that of my wife of one year, "San."  I think the novel was The Vagabond, but won't swear to it.  San and I gardened like mad in our northern Vermont property, eighteen years of rural happiness before we moved to a city neighborhood in St. Louis and lived the best, and the last, twelve years of our marriage.  San died of breast cancer in 2008.

I became attached to Kathy Wofford six months later, and we married in 2009, hoping for decades together, but having only five years.  Kathy's life ran out last August.

My fiancee, Karen Berry, has been wearing an engagement ring for a month now.  We have been moving pieces of her carefully-chosen plant collection from her cottage twenty miles east of here to this landscape.  I have made room inside the house and outside the house for Karen's presence, her interests, and her creative soul.

Karen knew Kathy.  Karen was a new member of our daylily club when Kathy was elected President, just months before her diagnosis and treatment for head and neck cancer.  Kathy had the misfortune to have to inform the club membership of the board's decision to host a regional convention with only 18 months' lead time.  The matter was not put to the membership for approval, and a good number of members were hopping mad that the club's traditional way of undertaking a big project had been sidestepped.

Kathy weathered the onslaught without a ruffle, visible or invisible.  Cancer was the ruffle in her life.  Reporting a board decision to the membership was not in the same league.

Karen was the only member of the club who approached Kathy a year later and asked how she was holding up with her battle.  And Karen was the only person outside the family who Kathy told that she was worried how hard I would take her death when her time ran out.

During the change of season from summer to fall, Karen and I became a couple and Karen moved into a house in which Kathy's presence is visible everywhere you look.  Kathy was a designer by nature.  When we bought this house, she set upon a program of converting a trashy place into a classy place.  The closets are her doing, the doors, the new windows here and there, the new sliding doors, the new front entrance and the stone work leading up to it, the raised vegetable beds, the shade garden, the redesign of the block wall outside the garage, the placement of artwork in every room.

I began last fall to make space for Karen in this house.  I removed Kathy's rug and Kathy's filing boxes from our "office" and opened that space for Karen's work-from-home office.  We donated Kathy's bed from our guest room and have a replacement on order.  We took down most of Kathy's collection of Shawnee pottery and made space for Karen's collections of horse figurines and glass objects.  We replaced the dishware with Karen's Fiestaware, replaced San's Farberware cookware with Karen's preference for All-Clad and cast iron.  We have retained San's Le Creuset set.

This is Karen's place now, and we are shaping the landscape for our garden projects. 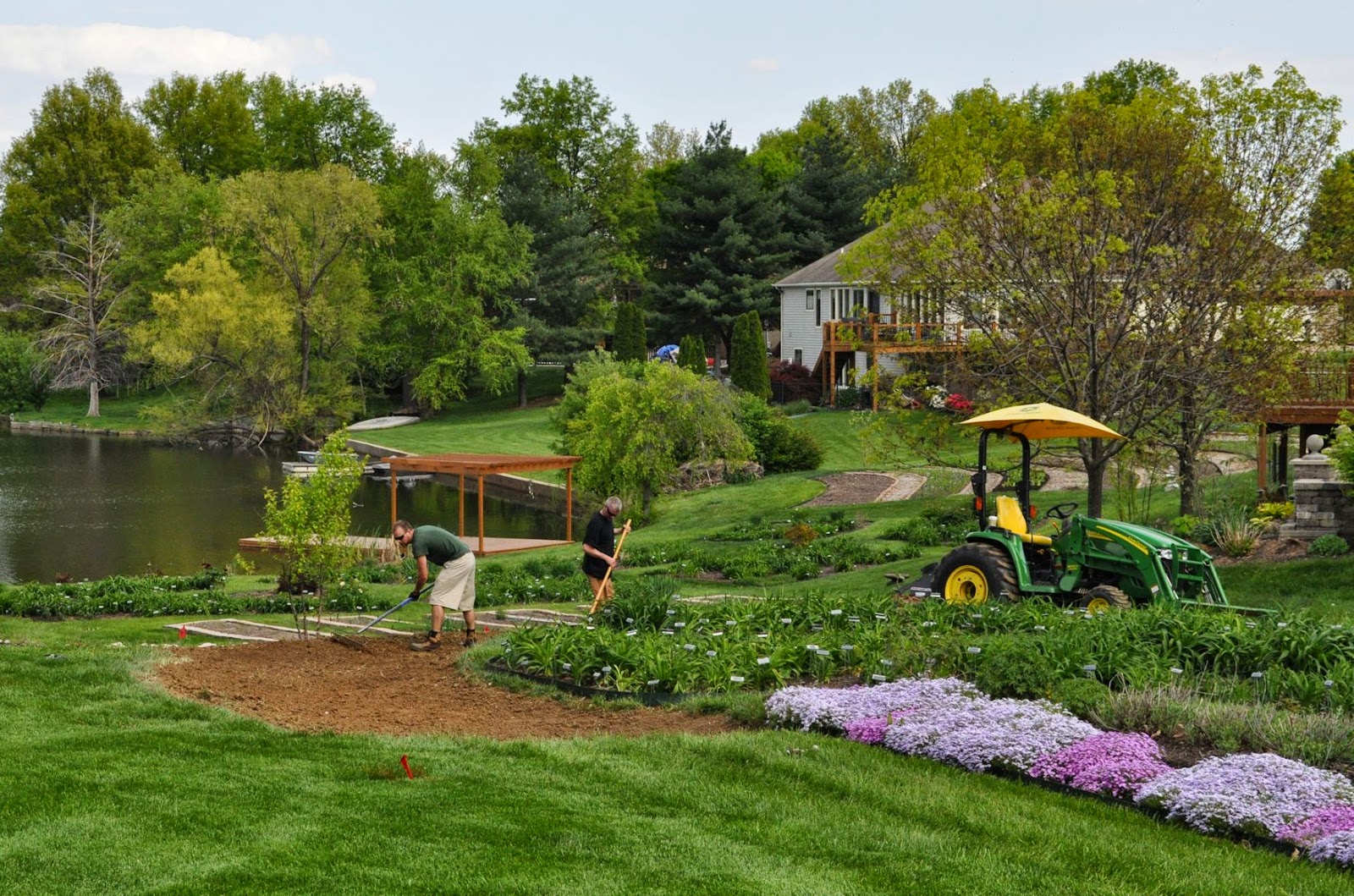 Today my contractor, Steve Brandt (right) and Tim Yankow arrived to contour the ground where storm water runs off the high side of the neighborhood over my neighbor's lawn and then across my "highland" daylily beds.  They are contouring a curved swale to  direct the flow of storm water around the daylily beds and over to the main drainage channel to the right of their position. 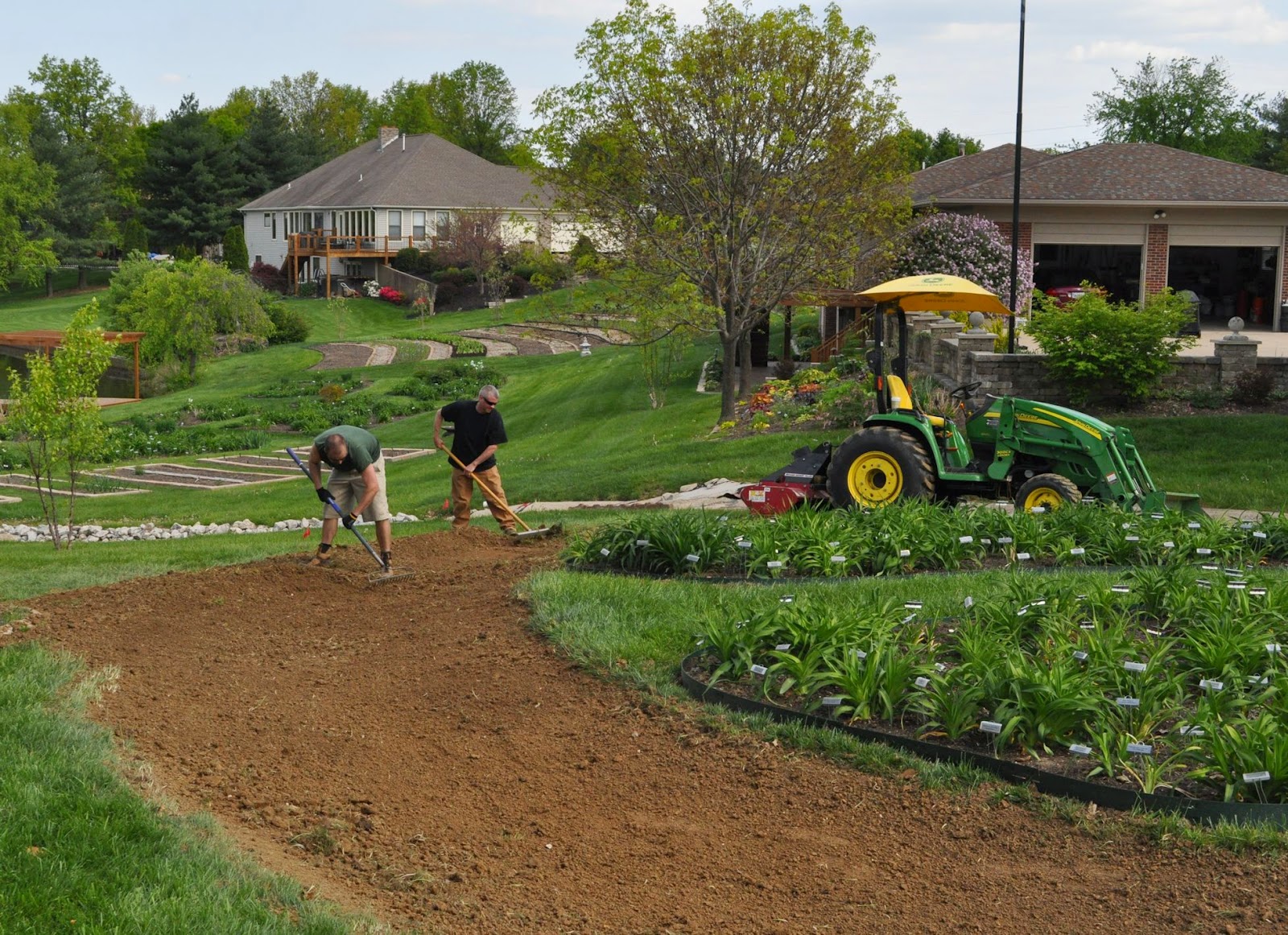 They are shaping the side of the new channel so that 36" wide mowing equipment can easily follow the curve without shaving off the top.  The whole area will be covered with sod tomorrow. 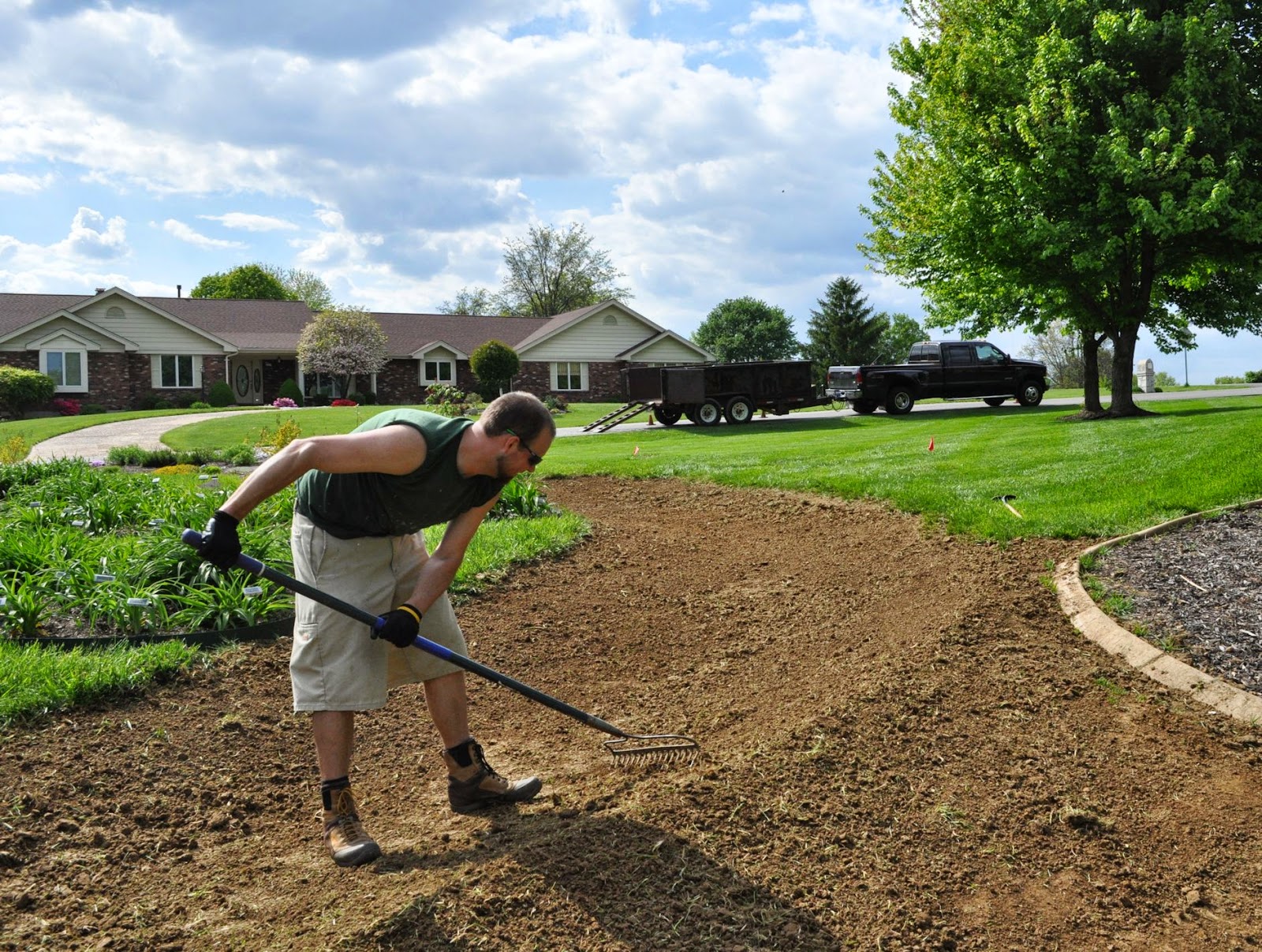 Here Tim is raking out the side of the swale.  You can see the elevation of the rest of the neighborhood with respect to my gardens. 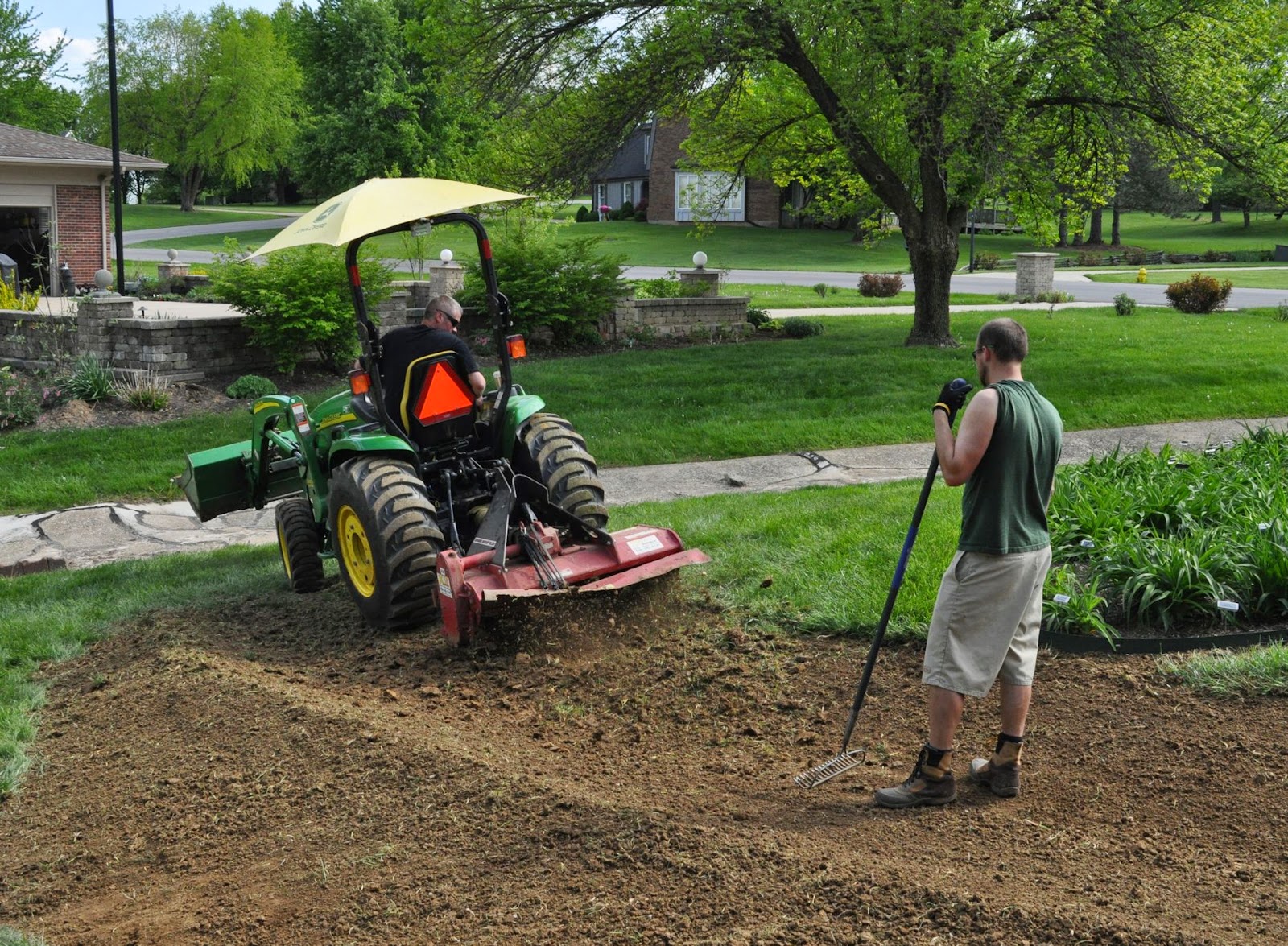 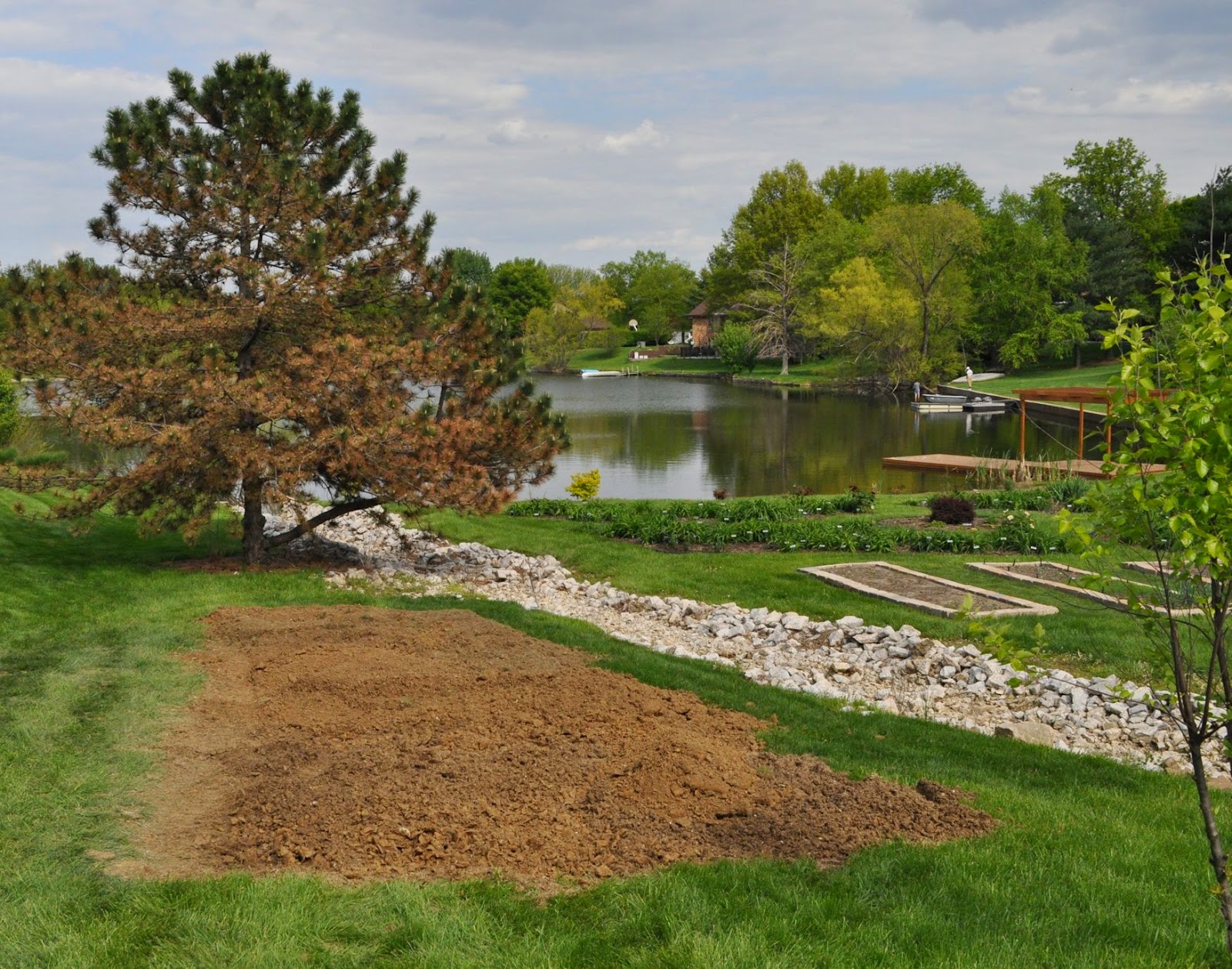 Just below the curve of that swale is a new garden for Karen to "curate" her collection of vines and butterfly-friendly plants.  Steve and Tim will put up a 5-foot fence on the left side, thirty-six feet long, for the vines.  They will surround the bed with metal edging.  Karen will start moving plants this weekend. 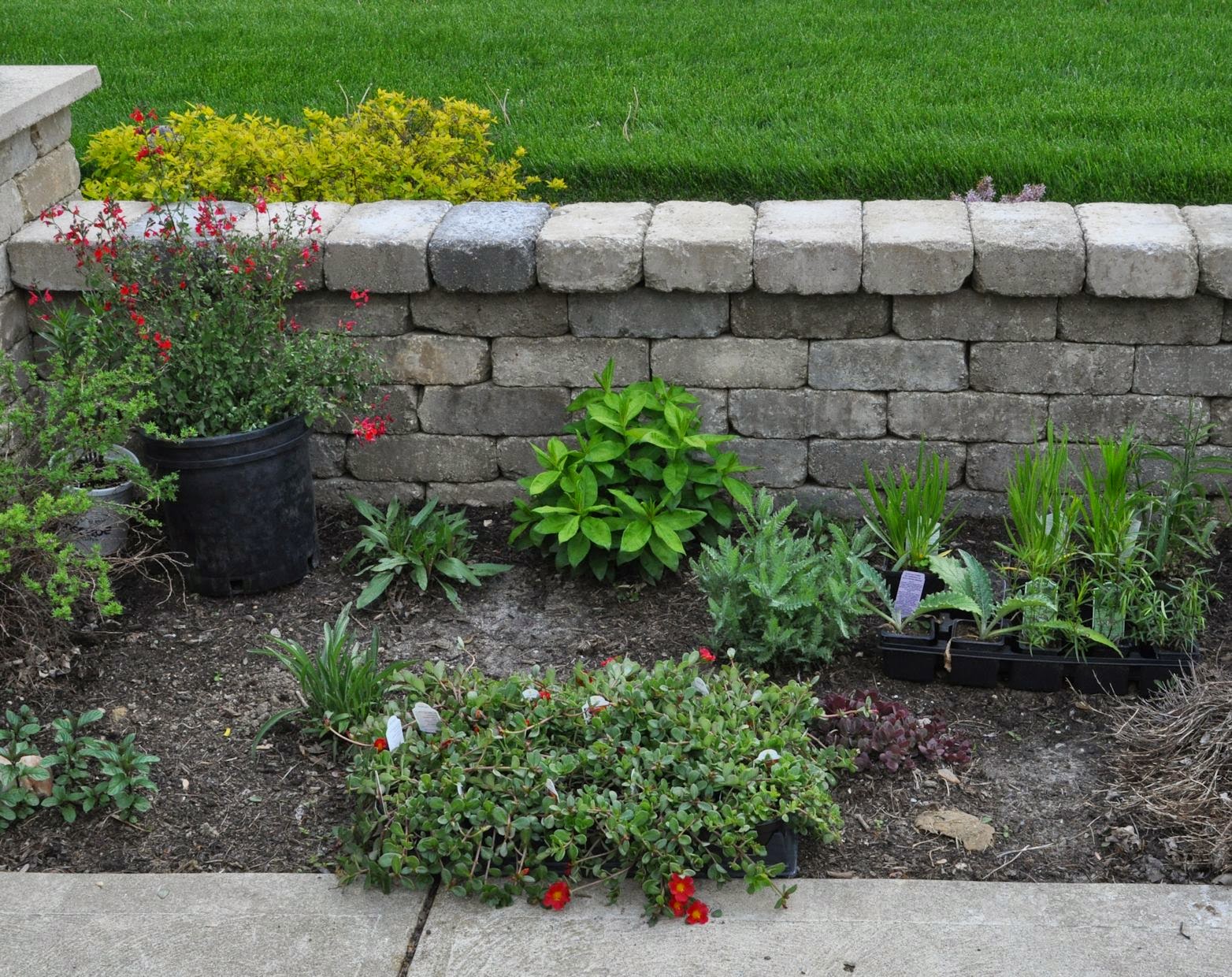 Our car park area is serving as a staging ground for trays and pots of plants that will go all over the landscape.  I have three trays of a variety of Portulaca that resembles Purslane, but with narrower leaves.  I used this last summer and thought it was sensational. 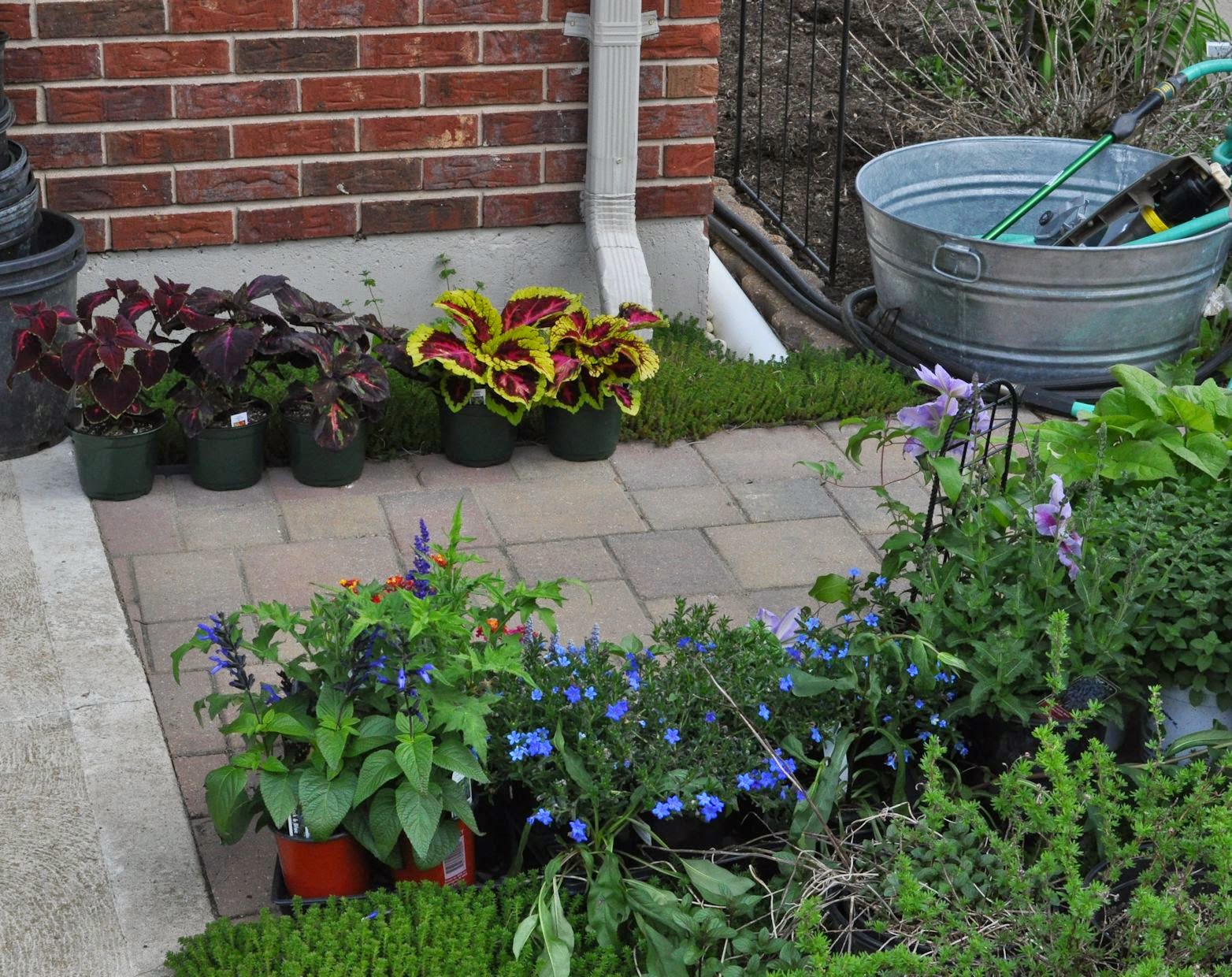 We're going to try some coleus and lots of "blue stuff" and at least one Clematis.  Who knows?  I may put in four or five of them!

It was just a year ago that Kathy's friend Laurel visited here and helped me plant trays of annuals along the front.  It was seven years ago that San was unable to finish the last week of her classes at SIUE.  She passed away seven weeks later.

Spring is the season of the assertion of life in the garden.  I have been blessed in all my marriages to share the lives of women who loved plants, birds, art, and music.  Grief may continue at its own pace; but so may life.
Posted by Seeker at 6:09 PM 0 comments