A Time for Reflections

I have been heavily into reflection since I turned the corner in December, but with a camera in hand, reflection becomes a theme.  Take, for instance, our dear companion, Lola The Poodle. 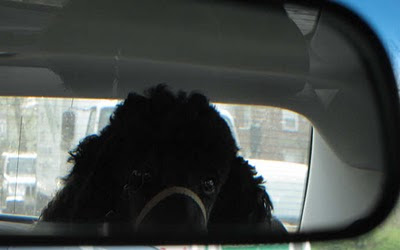 Lola is getting a lot more rides, now that I'm home more than not.  With a poodle's intelligence, rides are essential to a sense of well-being.  She especially loves a ride to Starbucks. 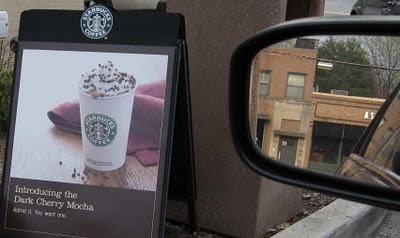 She nudged me when she read "Admit it.  You want one."  I couldn't translate what she said to me about that, but I don't think she wanted to admit anything at that point.  She had her eye on the car ahead of me, and on the mirror. 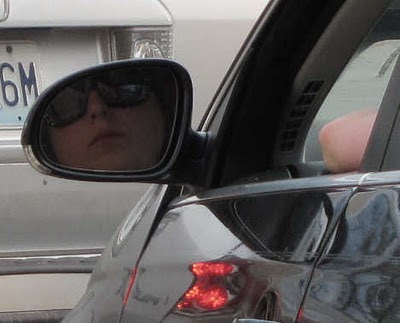 Reflection, reflection...oh, there is no boundary to it.  Italo Calvino could have started a novel with a picture like this, but I can only start a sub-reflection:

She had a far-away look made formidable by the oversize dark glasses.  The narrow mouth closed without energy.  A thought formed...what was it?  "Did I turn off the stove?"  No, nothing that mundane, not in a story by Calvino.  Not, too, a thought about what to order this morning.  This is a thought about something that might have been, if not for...


Or was that my own thought, imagined in the car ahead, or was it not a thought at all but just a brief reflection on the way good and evil contest in the world and on the ways that evil often seems ascendant, even triumphant?

Even the lens of the dark glasses contains a reflection.  The car's surface is another mirror, a symbol of arrest without warrant, to play with words.  It's all about Stop and go at Starbucks, nothing about the play of good and evil, just spreading cheer with a bit o' banter.

Lola waits to make her remarks.  At the window, she barks, "That's hot!  Watch out!  Don't spill that!" and the girl smiles.  They know Lola and all her warnings.

In my jesting about retirement careers I have posited a life as a pirate on Missouri waterways, or as a counselor for out-of-work government torturers who have an immense weight of reflection on them as they push their grandchildren's strollers down the sidewalk, always attentive to the possibility that an assassin from "the enemy" is in the neighborhood, waiting.  I wonder this, I truly do: do parents and grandparents who torture people feel the disquieting and self-killing feeling that the person they torment is someone's child or beloved?  Does the torturer's capacity for empathy boomerang back and inflict a terrible wound to the soul?

The suicide bomber and the torturer are expressions of the One Evil.  They walk the same side of a dirty street no one travels but the broken, those lost to the world and estranged from the One Good.

Oh, lost people!  Are you tugged and dismembered spiritually when you hear a line like this, from Neil Young's "After the Gold Rush?"

I was thinking about what a friend had said,
I was hoping it was a lie.


She turns the corner; her face is gone.
Posted by Seeker at 5:56 PM 0 comments