We Call it "Heron's Cove" 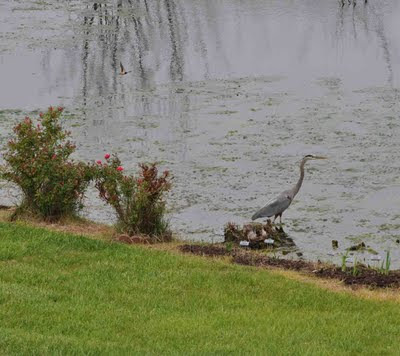 Here at the Duckworthy Estate at Hidden Lake, we have Turtle Haven to the right of "Boone's Dock" and Heron's Cove to the left.

The day we moved in last September, a convention of ducks was napping on the dock.  Thus, this "estate" in Hidden Lake Estates was dubbed "Duckworthy."  It sounds somewhat like Old Money, from Way Back, around the era of the Great Gatsby.

There are probably many places named Heron's Cove.  Most are real coves, not little curves in a man-made lake that was once a hog woller, or wollow, depenting how how fastidious you are about spelling.

We named our little curve Heron's Cove because of this bloke, or blokess.  I don't know how to determine gender in a Heron.  This afternoon when Kathy spied this bird, I grabbed my telephoto and fired off a dozen pictures from the open door to our deck.  The picture I like best shows a bit of our new Japanese Iris and Siberian Iris collection, the bright flowers on the Knockout roses, and a goldfinch swooping just above the shorter rose bush.

I think I had five-star horoscope today.  At least I felt like I did.  Steve, Carl, and Tim showed up this morning to take off half the deck so that Steve could more easily correct the grade of the lawn there.  We plan to replace the deck in a few weeks. 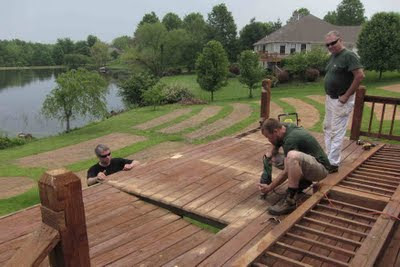 That's Steve Brandt in the black tee shirt.  He's President of Branco Construction.  Timmy is sawing through the deck joists as Carl Brandt, the company's founder and former President looks on.

My un-tilled seedling beds are in the background.  The larger beds behind Steve are for mixed perennials.

By horoscopic providence, the first of two dump trucks full of leaf mold arrived just after lunch, eighteen cubic yards for the new daylily beds on the front lawn.  Steve offered to spread the compost with the tractor he'd brought.  Now there's a piece of luck!  The rich black compost always smells like pipe tobacco to me and reminds me of the twenty years that I was seldom without a pipe in my mouth. 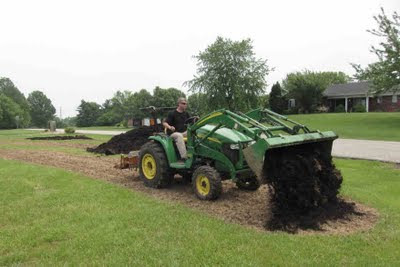 You can see the big pile of eighteen cubic yards behind Steve.  He dropped one bucket at a time and then dragged the bucket over the dumped material to distributed it at the six-inch depth I wanted.  Tomorrow, weather permitting, I'll till those beds to a depth of eight inches.

The small bed with some mulch on top that's beyond the big pile is a triangle where we will add dirt to build up a berm.  Then we'll plant three Redbud trees on that berm to anchor the view of the property for those driving past on Hidden Lake Drive.  On the other end, seven hundred feet away, we'll plant three white dogwoods.  Here's a picture of Steve working on those beds after the second dump truck arrived with another eighteed yards about an hour later. 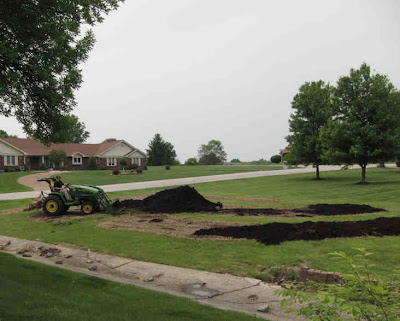