First Plants in the Ground 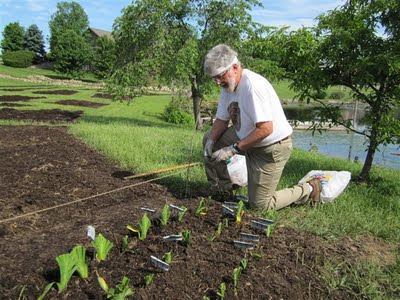 Yesterday, Friday the 13th, Kathy and I re-planted the 381 seedlings that germinated in a University City garden in 2010 and were dug with the help of Seajay and Richard Mock on Thursday. Since there were so few seedlings to put into the new garden space I allowed for a regular crop of about 2000 plants, we gave them generous spacing in rows a foot apart.

Three hundred eighty one seedlings out of about two thousand seeds is horrible germination.  With hybridizing there are "disaster years."  One man I buy from lost a big section of "futures" to a sink hole in Florida.  Another man I've known for over a decade lost almost a whole crop recently because he planted the seeds too deep.  I've lost a crop in a cold frame from fungus gnats in the potting soil.  They awoke and feasted on the tender roots of the seedlings.  Friends supplied me with surplus seeds.  There are so many ways to be shocked and disappointed with seed storage and planting, and yet when I weigh my disappointment with the monumental disappointment of a farmer who can't get a crop in or out, I have to relax about my own problems. 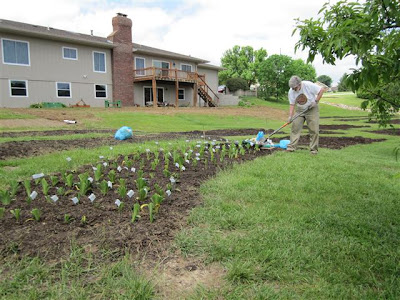 Each plant came over in a plastic grocery bag or bookstore bag or drugstore bag.  I get them at the recycle bin at the grocery store.  Then I save them for more trips.  There are hundreds more plants to move here.

In the background you see the lawn has been regraded somewhat and half the deck has been removed to allow room for the regrading.  On Thursday, Steve and Tim thought they would only have half a day of work before rain moved in, but the rain didn't come, so they were able to install a new rain drainage system to collect the outputs of all the rain gutters and empty them onto the middle of the back yard.  The last thing we need in the swampy front is water!

The existing drainage system hadn't been carried out well.  It was causing erosion and swampiness around the basement.  There is more grading ahead, to make a gradual slope to the planting beds in the middle of the back yard. 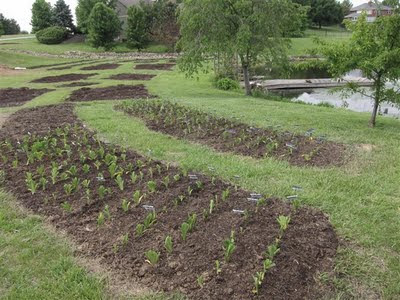 Here's the finished work.  I'll plant this year's seeds densely on the end of the near bed.  Then in August, I'll transplant those that germinated to another two beds that I'll have two months to prepare.

The promised rain arrived this morning, a gentle all-day soaker that will prevent any more garden work here for many days.  Rather than work today, we went to Daniel's Farm and Nursery and bought two more dogwoods, two more redbuds, and a fragrant viburnum.  They will be delivered and planted in berms we'll make with Steve's help in the coming week or two.

When the ground it too wet to work, we have the all-summer project of tossing hunks of concrete rubble out of the swale that drains neighborhood storm water.  Since the swale lies on our property, the city isn't able to help with the cost of fixing it when sections collapse.  That's our worry entirely, but we don't actually worry about it.  Even with the clear-out only a quarter done, the water is remaining in the channel rather than running over the left side of the gardens.  We'll make more progress on it every day it doesn't rain for the next week or two, until we can work the ground again.
Posted by Seeker at 6:16 PM