It has been a big weekend here, as we dodged rain for three days and started "moving in" where our immense landscape is concerned.  Friday offered a prime opportunity to build berms on the two outside corners of our property.  But when Carl Brandt checked in with Chesterfield Topsoil, they told him there was too much rain Thursday and their soil was heavy and wet.

I gave Carl the names of two local suppliers and we settled on my favorite nursery, Daniel's Farm, just two miles away.  Their topsoil is sandy loam from Troy, Missouri, up on what used to be the tallgrass prairie.  Steve Brandt arrived with the tractor and with his helper, Tim, and they began to work on drainage trenches while we waited for topsoil.

We needed four truckloads of 5 cubic yards, we figured, maybe more, but we'd see as we went along.  The soil started to arrive before noon.  At that point, rain was forecast for three o'clock.  We asked the driver to have the trees delivered after lunch. 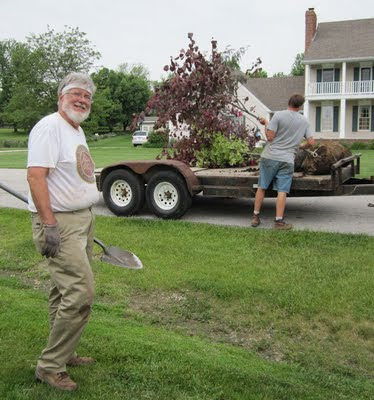 Three Korean Sousa dogwoods (they take full sun and require attention to good drainage in the heavy local soil; that's why we made berms.) and three Forest Pansy redbuds, plus one fragrant Viburnam.  Since we were in a race against time, I decided to be part of the crew. 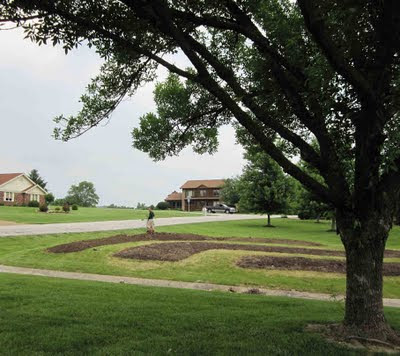 Yes, the lot is immense at the street side.  It's shaped like a quarter of a pie.  Tim's out there checking the depth of the hole so we're sure the top of the root ball is up at the top of the berm. 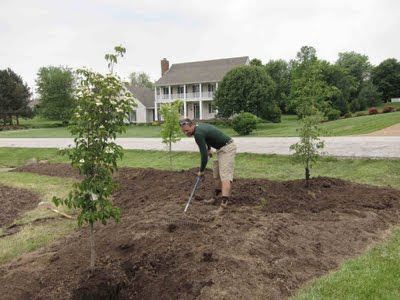 It took a lot longer to place the trees than I thought it would.  Tim tweaked the shape of the berm with a rake.  Long sleeves?  Probably for sun protection.  We were lucky the sun wasn't out and the temperature wasn't bad. 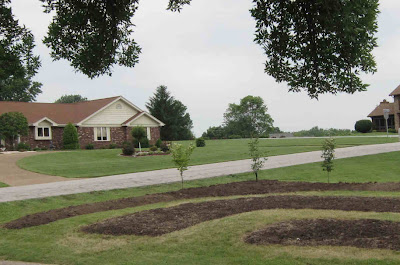 OK, one side done.  Rain not threatening yet.  Tim said it wasn't expected until 8 o'clock.  Time was on our side, but we didn't have enough topsoil.  Steve had borrowed a lot of it from the other corner to make the first berm right.  So I called in for a fifth truckload and Steve and Tim began to place the redbud trees on the other corner, expecting to fill in between them later. 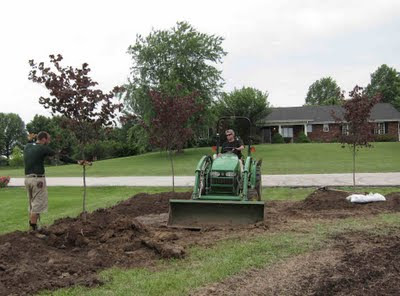 You can see there was only enough topsoil to surround the trees.  Shortly after 5 o'clock, Daniel himself drove up with the fifth load of soil and Steve set to spreading it while Tim and I manned the rakes. 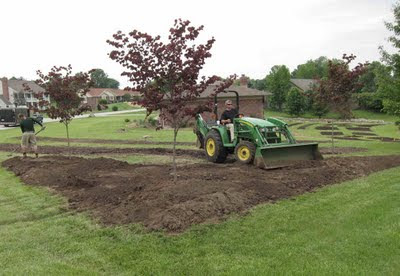 Still not enough soil.  We'll need another three yards next week to get the berm right.  Tim was pretty played out by the time they quit at six o'clock. 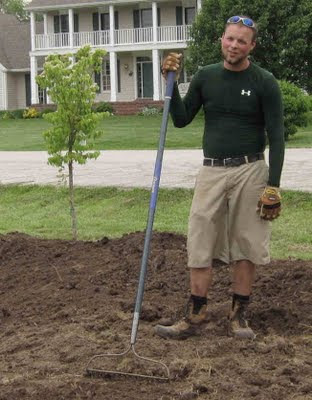 I couldn't thank them enough for completing that part of the job.

It never did rain Friday night.  Saturday morning was sunny, so Kathy and I bounded out of bed and started the long job of planting the daylilies.  Her part of the job was to plant the "line-out" plants in the bed near the dogwood berm.  We weren't able to plant there until the tractor work was done, so Friday's work moved us into the next phase of planting those beds.

I went to University City and dug fifty-three cultivars and ten seedlings during the morning.  After lunch I fired up my new earth auger and drilled planting holes in the curved bed farthest from the redbud berm.  The near bed can't be planted until Steve finishes the tractor work on the berm there.

Today, with another opportunity in the morning, we worked the same routine.  I dug plants at the Green Center for two hours, came home for lunch, and we both worked another two hours planting.

Here's the line-out bed that Kathy's been working on. 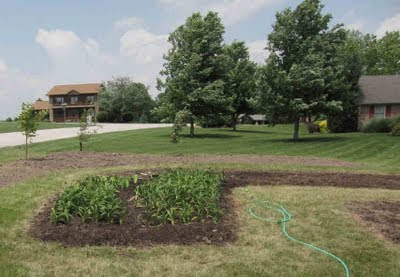 And here's the quasi-display bed I've been working on.  I've got 83 plants in now. 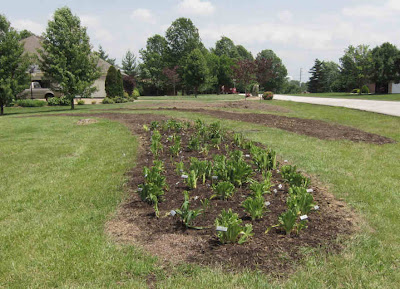 We've got severe storms in the forecast for tonight.  The tornado sirens went of an hour ago, but the menacing storms went north and west of us.  More threats are expected around nine.
Posted by Seeker at 6:50 PM