The Race to Get Them Planted

Yesterday was a perfect day for several hours of digging.  The morning temperature was in the sixties and the drizzle I drove through on the way to University City wasn't falling when I got there.  I dug sixty-one plants, many of them pretty good clumps, and packed every available space in the car with them, save for the space I allowed Lola the Poodle in the back seat.

After lunch I planted about forty-five that were left over from the previous day's dig.

It's clear to me now that I have more interesting plants than I have space in my two hybridizing beds to display them, so I'm going to have to plant the whole collection without much planning, use the ample space in the back yard, and figure out a proper planting scheme for next year.

Today was the beginning of a substantial warming trend, with a high of near ninety predicted.  Kathy and I both got outside right after breakfast.  Here she is several hours later, planting the line-out bed, where we are growing various things in blocks. 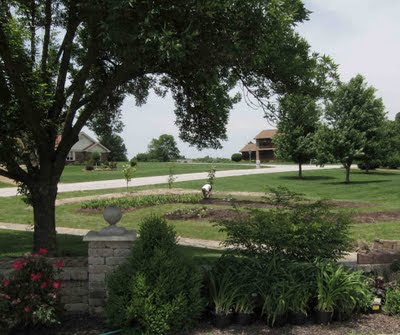 I took the earth auger out to the shorter of the two big display beds near the street and planted all the ones I dug yesterday plus a dozen or so more that were either sitting in a pan of water or growing in pots. 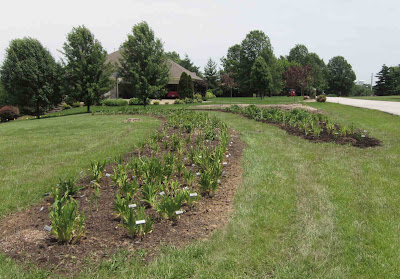 Getting them planted before they bloom is exciting, but even more exciting is the sight of new seedlings breaking the surface.  I spotted them from the bedroom window yesterday morning and confirmed what I saw when I took the picture of the robin eggs.  Here's a picture of a mass planting of several dozen seeds sown densely about an inch deep. 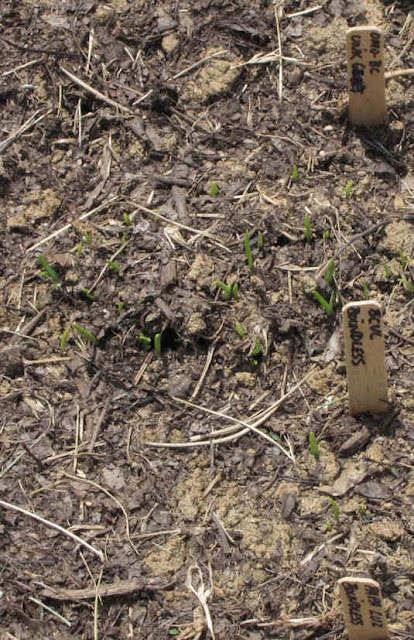 That cross marker, "BCVL x Boundless" means my seedling from BUTTER CREAM X VICTORIAN LACE by BOUNDLESS BEAUTY.  The marker at the bottom of the photo, "Papa Luz x Boundless" is shorthand within shorthand.  "Papa Luzio" is a nickname for a seedling from (BETTY WARREN WOODS X PERSIMMON PUNCH) X BUTTER CREAM.  My friend, Ken Luzio, had admired a bright yellow seedling from BETTY WARREN WOODS X PERSIMMON PUNCH, so I nicknamed it "Ken's Yellow."  Then I nicknamed its offspring "Papa Luzio."  That seedling was vigorous and it had a nice scape with bright medium yellow flowers that just didn't thrill me.  So, before abandoning it, I made a final cross with the exemplary BOUNDLESS BEAUTY.

Here's another one that stirs up my hopes: 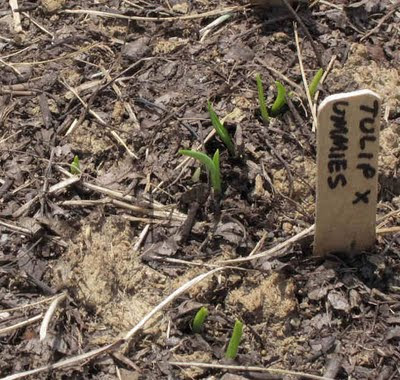 "Tulip" is a nickname for a seedling of exceptional blue pewter color from BEST KEPT SECRET X TARTA.  As the name indicates, there is often an opening problem, resulting in a flower that resembles a tulip.  "Ummies" is the exceptional pink, rose, and pewter lavender flower, UMBRELLAS OF CHERBOURG by the late Steve Moldovan.  My goal is to retain the distinctive color of "Tulip" on a flower that opens correctly.

We were finished for the day a little before one and had our lunch staring out the big sliding glass door at the water of Hidden Lake.  I wish I had the power of Hercules and the endurance to go out there and plant another seventy, but I don't think I ever had that kind of energy.

I'm starting to think ahead now to the circles and broken circles I've designed in the gardens in the back yard.  I'm going to encircle the shrub, Spirea "Gold Mound" with plants of the daylily, ELIJAH, and that will be my "Ring of Fire" bed.  I need a plant of the daylily, JOHNNY CASH somewhere nearby.  On the far corner of the lawn, I have four beds around a circular bed.  I've "painted" the picture to show one of two ideas I had for planting on the curve of each bed.  The picture below shows, with too bright a pink, the effect I have in mind with a mass planting of the daylily JACQUELINE KENNEDY ONASSIS. 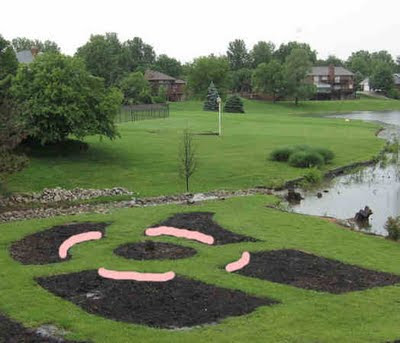 The next photo changes the color to cream with just a hint of pink, which is not visible in my painted picture.  In this case, the mass planting would employ the daylily GREEK EFFECT. 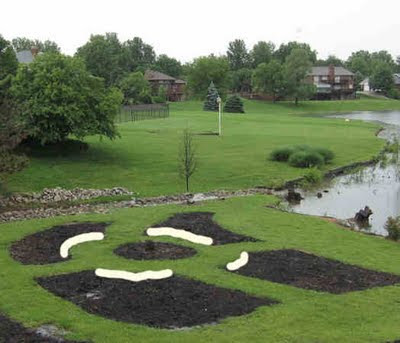 I have two sets of four beds like this in the back yard and might just use both ideas, as I have enough plants to realize this vision this season.
Posted by Seeker at 3:28 PM