A Song Triumphant - The Hybrid Daylily

This is a daylily named SONG TRIUMPHANT, living up to its name after playing dead for two weeks.  It had arrived at the wrong address and sat in moist conditions in its box for two weeks before I planted it in a perfect spot.  It sat there, just a tube of dead plant tissue for two weeks.  A few days ago, I broke open the tube of dead tissue and saw some living tissue within.  Today this is what it looks like. 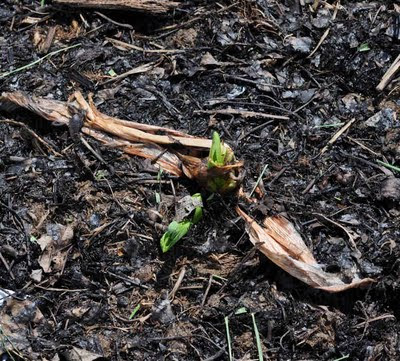 There are two dozen or so daylilies in the same fix, and all but a few are showing regrowth now.

I have known that daylilies are tough plants.  In 1996 I shipped my Vermont daylily collection to my temporary address in St. Louis in the month of May.  When I dug them in Vermont, a snow flurry was discouraging my work.  When they arrived a few days later, St. Louis was in a rainy season, and the clay soil where I lived was unworkable.  So I arrayed all the plants bare-root on the concrete floor of the garage and let them sit there for more than a week.  The garage wasn't super hot, so they didn't cook, but they dehydrated over time.  I thought about a story I heard about an international shipment that was in the box for six weeks because of a problem.

When I finally got my plants into the clay, they took a long while to revive, but revive they all did, except for one, which died after its brief revival.  It was just played out, I guess.

This month the problems of moving plants were more serious.  The heat was in the 90s.  I was digging them by the dozens and leaving them on the ground inside plastic grocery bags, exposed to the heat.  Occasionally I'd move a batch to the trunk of my car, which sat in the shade.  Within a day, I'd plant them here, also in high heat, but in moist soil, and I watered them in and kept them in wet conditions.

The plants in the most serious trouble were the ones that lay in plastic bags on the ground too long, both at the digging end and at the planting end.  Several still look quite lifeless and hopeless, though all of them felt viable when I planted them.

The unfavorable conditions at the digging end began with the ultra-close planting last August when I moved them into temporary quarters.  At the time, I thought I'd get them all out in April, but April was a rainy month here, and I didn't get to them until the end of May.  By that time, the "early risers" in that bed had put up enough foliage to completely shade the late risers.

Many daylilies can't tolerate dense shade, so a lot of my plants regressed to pitiful shadows of their former selves.  Some of them were so meager that I put them into an "intensive care" area of the garden where there was no chance of competition for light or nutrients.  Most are reviving now.  Some are probably lost.

I lament the losses, but they are so few in number that I celebrate the general toughness of the daylily.  It's hard to kill them.  Better not push your luck, though.
Posted by Seeker at 9:09 PM

Email ThisBlogThis!Share to TwitterShare to FacebookShare to Pinterest
Labels: Daylilies