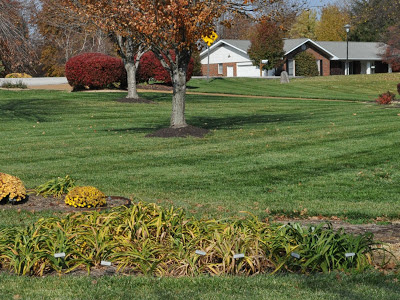 Today there is the red of Burning Bushes to enjoy and the last taste of mild weather before the quietude of Thanksgiving and the shift from outdoor work to gym work.  In the foreground is a section of what may be my future daylily registrations.  They are lined out as if I'm serious about them.  At this stage of the evaluation process, the ones that don't make a case for themselves are dug out to make room for the next class of contenders. Notice the dark green rows of plants on the far right, and the brownish plants next to them. 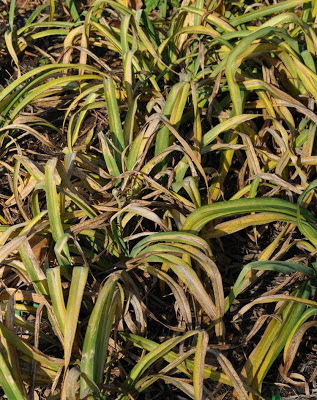 The yellow color you see is the natural "autumn" of a daylily that is going into dormancy, but the "paper bag" color is what's left of the leaves that were invaded by daylily rust in mid-September.  Rust broke out in a bed about twelve feet away on a couple of seedlings that arrived from the Deep South in April.  The seedlings arrived with rust within the leaves, though none was visible.

An outbreak of rust spores on the surface of the leaves only happens when the leaves are wet and the temperature is in the seventies.  We didn't have those conditions until September, so there was no visible rust.  Once it breaks out, the spores are carried on the wind or on the coats of passing animals or the clothing of gardeners.

Daylily rust lives only in the green leaves of the plant.  When the single-digit temperatures of winter kill the foliage down to the ground, the rust dies with it.

I'd have to admit that the seedling above shows "high susceptibility" to rust and that nothing much good can come from saving it for further evaluation, so I'll dig it out this weekend.

It is amazing to me that the rust spread into this "futures" bed but did not make much headway.  The photo below shows the rows of plants that were closer to the source of the rust outbreak. 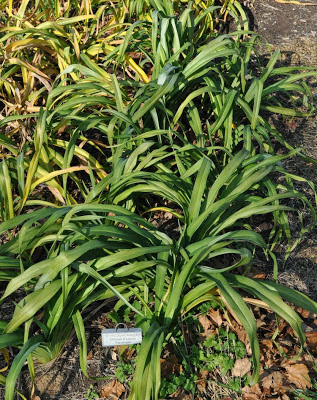 You would think that if wind carried the spores into the heavily affected rows, the spores surely would have landed on these "clean" plants.  The lack of yellow in these leaves indicates that the foliage is of the "evergreen" type, and I know from experience with this seedling that it's quite hardy in our winters.  The foliage has withstood a couple of below-30 freezes at this point, and I expect it will take several hours in the low twenties to really make these plants collapse for the winter.  I love seeing plants this healthy in mid-November!

I hesitate to say that I have a bed that is mostly "resistant" to rust.  All I can say about this row of plants is that I have not yet seen them affected by a rust outbreak in the same bed.

Here's a look at the sort of "plant habit" I like.  This is a small clump of my SYMPHONY CHORUS lined out for sale. 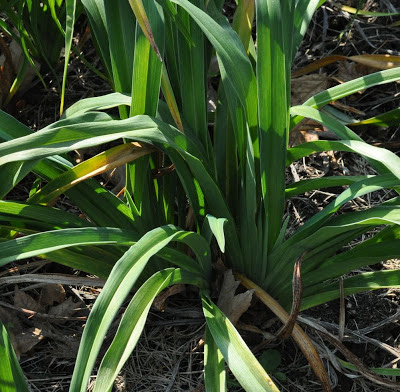 I see three husky fans growing at slightly different angles, the foliage looking quite healthy and evergreen.  This has proven hardy and vigorous, with blossom presentation that makes a clump something dazzling.

Next to it is a very tough evergreen, MOM'S MIRTH.  It survived a December transplant in an emergency about ten years ago, when it was a new seedling under evaluation. 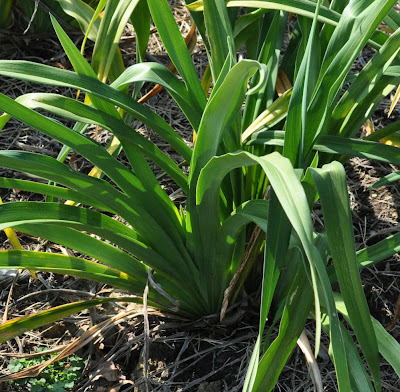 Again, I notice the vibrant appearance of these big fans coming up in several planes from the center point of the clump.  MOM'S MIRTH generally looks as if it is springing to life. 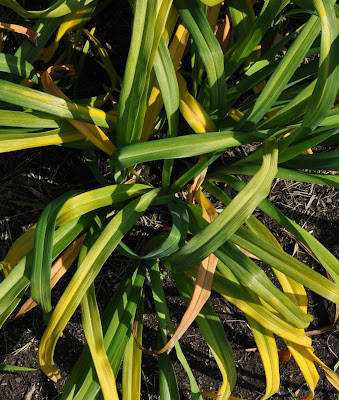 The yellow shows it's going into dormancy, but the interest is the number of fans.  This was lined out as double fans in 2011, and this little clump needs to be divided and lined out again after just two seasons of growth.  I know this is a nice landscaping plant when planted in a mass, as that's what things look like in a line-out bed with short rows.  I also know this makes tall scapes with nice branching and lots of pods when breeding with it.

With temperatures holding mild through Sunday, Kathy and I will plant spring bulbs this weekend and pick the salad vegetables that have grown to eating size!
Posted by Seeker at 2:12 PM

Hi Michael!
Glad to see your daylilies going dormant--you beat me to posting a photo of the process, though.
Also glad to hear that some of your salad greens survived the frigid mornings while you and Kathy were in California. The
arugula in my garden looks as if frost has yet to arrive--though delicate plants have already died of frostbite.