Here's my KEB planting the last of her garlic over the weekend.  She is by nature a careful planner and planter, a designer of spaces indoors and out, a lover of proper containers for everything, including screenplays, stories, and sentences.  She likes to think about the structure of things as they are and as they might be.  I am in awe of how her intelligence works. 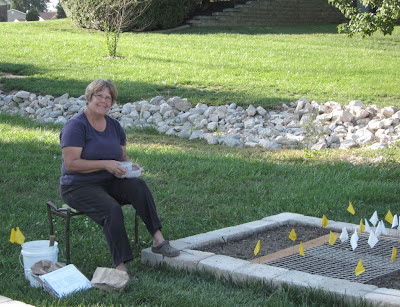 The device you see lying on the dirt used to be the "dog door" that kept Lola out of the cat's room (our office) in our former home in University City.  The door is her planting guide and the little flags hold it in place until she needs to move it, and they mark what has already been planted.

Kathy had worked out an intensive planting "map" of each garden bed.  The map showed plant spacing and the overall allocation of space so that peas of one variety were in a different bed from peas of another.  All we are saying is give peas a chance!

Garlic must have its day, too.  In addition to choice varieties from our friend, Richard Mock, we have other garlic that came in the mail.  The box was so full of aromas!  Just like our kitchen yesterday with I made a new batch of Balsamic vinaigrette with three or four cloves of crushed garlic and almost a tablespoon of Dijon mustard.

Here's the bed closest to our birdbath and deck.  I think of it as the bean bed only because they provide the most green at the moment, but the peas on the other end will soon surpass them in color. 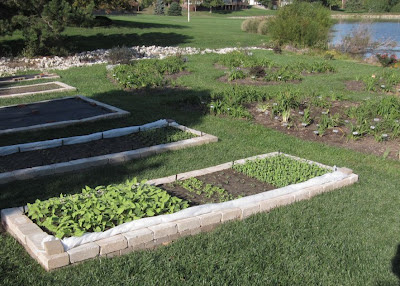 There is no wasted space.  Raising the beds slightly spared us the futile task of trying to spade or till the thick clay in the back.  We just lined up bricks and blocks and filled in with a topsoil and compost mixture from Daniel's Farm and Nursery down Jungermann Road.  I can't imagine a better or more helpful family-run nursery than Daniel's.  And he probably can't think of a better residential customer than us!  We are almost customers-in-residence there!

One more bed to show...this one next to the bean bed.  Here goes: 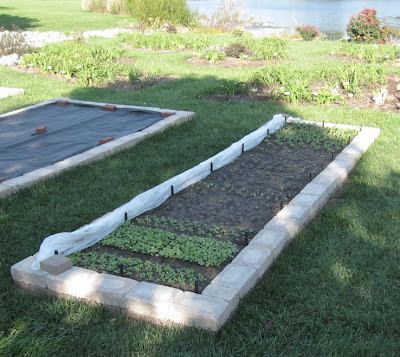 That white stuff on the side is a porous cover.  If a light frost comes along some night, this will provide a few degrees of protection.  Kathy covered the seed bed with it (loosely) and as the seeds germinated and plants appeared, they just pushed the cover up like a tent being raised.  It lets light and rainfall through to the plants and keeps insects out.

Here's the longer view of the area taken from the patio under our deck, which I'm about to go out and stain this morning.  You see my big "retirement present" wind chimes.  They make comforting deep tones much of the time. 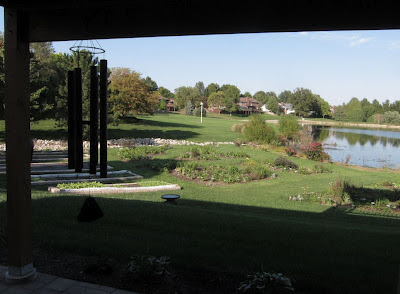 When I looked at this image I recalled part of a poem by James Stephens set to music by the American composer, Samuel Barber.  The poem is titled "Mary Hynes," and the last part of it goes

Lovely and airy the view from the hill
That looks down Ballylea;
But no good sight is good until
By great good luck you see
The Blossom of Branches walking towards you
Airily.
Posted by Seeker at 8:38 AM