There is some kind of malaise in the daylily collection here and in many locations across the country.  Most of us think this is related to an unusually early onset of spring, with unseasonably warm temperatures triggering a wake-up that would have best been delayed another three weeks.

The plants were then subjected to wild swings in temperature including a frost or two in mid-April.  That's our usual final frost, but considering that the daylilies began to grow three weeks ahead of the norm, that last frost happened in the "virtual May" of the garden.  That is evidently harmful.

Many plants began to show yellowing of leaves.  Scapes emerged only to yellow and wither.  Or flowers bloomed and set seeds and then the seed pods withered and the scapes died.  The whole garden now resembles a sick bay, but with bloom.

One is tempted to put one's mind into arrest and try to live in the imagined future of 2013.  I catch myself doing that.  But the truth is, the future does not exist and neither does the past.  Regardless of what the calendar says or what time your wristwatch or iPhone says it is, there is only one time and only one place: now and here.  We have a choice of living in our imagined past or future or participating in the moment we find ourselves in.  If the garden is a sick ward, let's see the patients as real presences in the here and now and forget about what they might look like next year.  They are whatever they are this year.  Let's listen to the singing of birds, the rustling of leaves, the sound of workmen on the roof next door, the splash of ducks landing on Hidden Lake.

Here is a daylily that bloomed for the first time here this week, and I liked it a lot better than the picture I found on the internet.  There is something vivacious about Emily Olson's BEAUFORT SLIM PITKIN.  The flower has attitude. 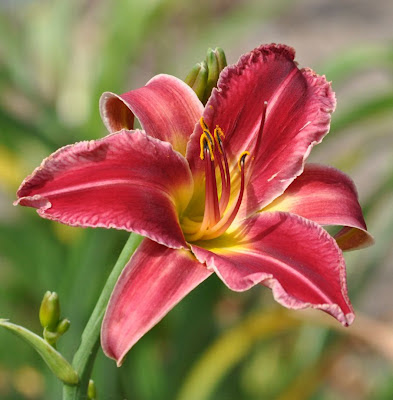 I like the clear red color and the red veins showing on the lighter red edges.  The cream piping adds a sense of "finish" to an obviously carefree presence.

Now here's a different sort of color plan.  Look at the fading of the dark purple of Steve Moldovan's BRAVO CARUSO near the edges and then look at the unique webbing inside what might have been a plain blue center.  This is a daylily to play with for pattern effects! 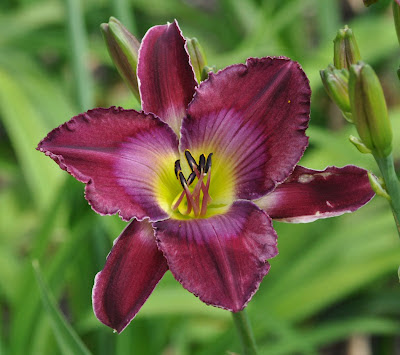 On a whole 'nother scale of pattern is the very fancy CONCERT MUSIC by my friend, Phil Reilly.  I suppose the reason I have never seen it look this good in the past two seasons is that the plant was new in 2010 and then it was moved to a temporary location.  It was moved again one year ago to the spot it occupies now.  The plant is growing in full sun for the first time and it is more mature. 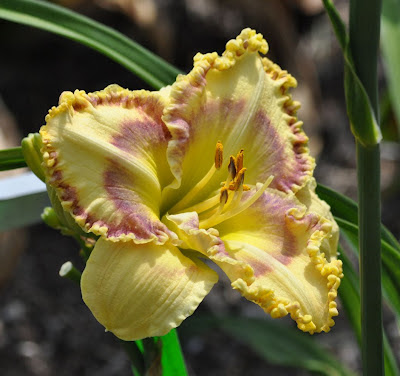 Kathy is having a ball with the collection of spiders and unusual forms I bought for her use last year.  Suddenly I am living with a real hybridizer.  Here is Jamie Gossard's ELECTRIC LIZARD the other day. 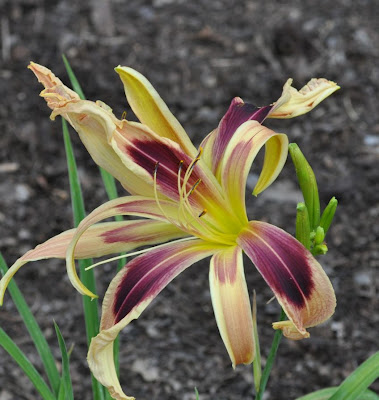 We both enjoy the strong and bold purple eye on that pink background, and we love the curvature of the floral segments.  The confusion in the picture is caused by a second blossom colliding with the one I photographed.  This is a serious flaw.  We'll have to grow this plant a few more seasons to judge whether the flaw is occasional or typical.

Bob Selman's MARILYN LEE BOCK is a rosy bi-tone with a beautiful scape.  We both marked this as special.  I like the pale silvery watermark around the green throat. 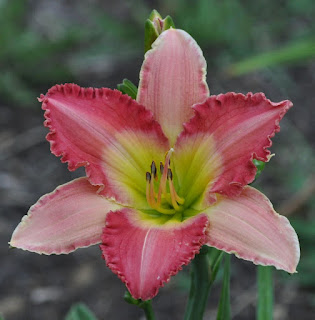 We had several unseasonably cool nights this week, which revealed a trait we have only a few chances to observe here, "cool morning openers."  Some of the flowers never opened at all yesterday, but this hot one, KISSED BY MAGIC by my friend, Paul Aucoin, was easily the best example of a CMO. 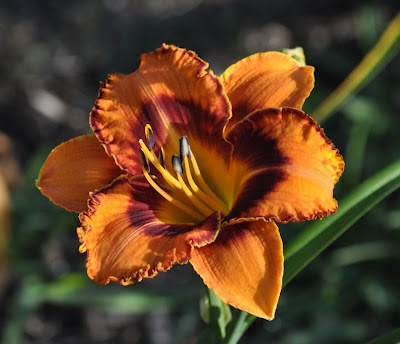 One of Kathy's spiders, PRETZEL POWER by Patrick Stamile, has been seemingly "kicking up its heels" this week.  It made us feel happy all over to imagine the joy of a pose like this on a human being. 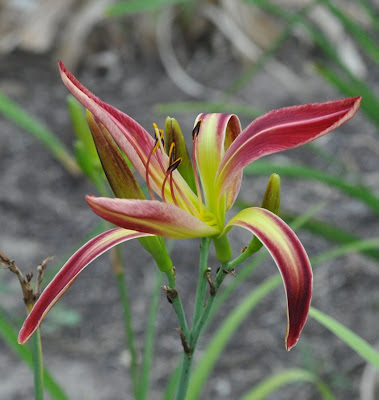 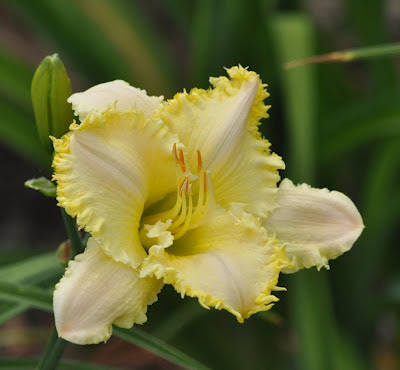 And then there is the elusive, ephemeral personality of Gayle Story's HEAVEN'S MIRAGE. 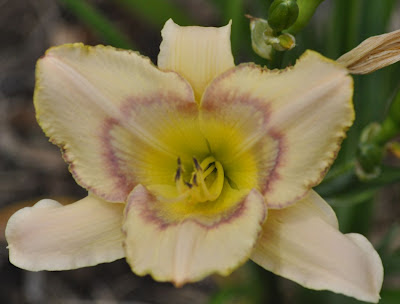 This is one of the many children of Larry Grace's DESTINED TO SEE.  We grow DESTINED TO SEE and many of the blue-eyed offspring from it.  This next one, though, is a knockout pattern that expresses the genetic conflict of combining dissimilar eye patterns at the grandparent level.  It is Karol Emmerich's HANDWRITING ON THE WALL. 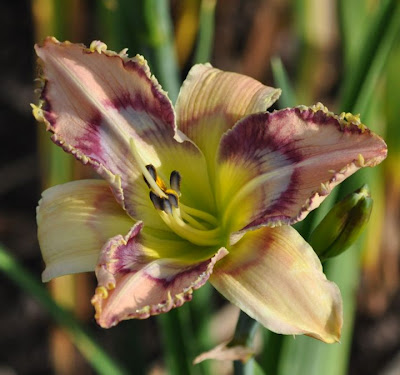 I'm enjoying several "pattern daylilies" that are blooming for the first time here this week, and one that has settled in after a year in the garden.  Patrick Stamile's WINTER RAINBOW appeared to be a goner when I checked the garden in March.  Then a sign of life emerged, and then a full-scale plant, and then some signs of increase.  I always experience a sense of the miraculous when this happens.  Here is WINTER RAINBOW this morning. 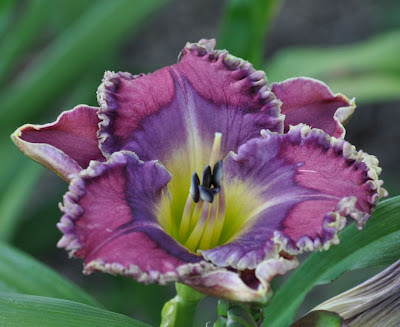 This play of quasi-blue, purple, and silvery lavender is thrilling, so much so that I forgive and overlook the flawed shape of the sepals.  We do not live in an ideal world.  I can take delight in the here and now of this flower.  I can marvel at the hint of blue on the anthers.  Amazing!

Here's a new one that arrived in April, Patrick's RAZZLE DAZZLE CANDY. 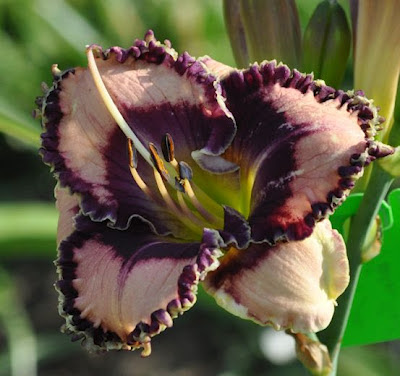 I am a pushover for these black edges outlined in beads of silver.  If this daylily looks this good soon after arrival in the mail from Florida, I can't help imagining the pleasure it will give me next year.  But that is assuming the plant is winter-hardy here.  I'll have to enjoy it right now, as if it may be an annual, and hope for the best.

Also a pleasure right now, even though I have to crouch down to view the flowers on a 5" scape, is a new arrival just a few weeks ago, Ted Petit's ROYAL CYPHER.  I sure hope it grows a scape of normal height next year and that the flower is much larger.  But I am soaking it up now, because now is all there is. 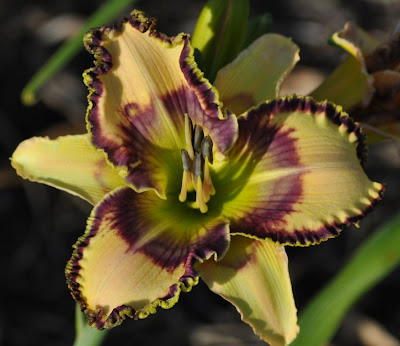 I anchor my collection with a good number of varieties that originated decades ago and held their place in people's affections.  I'll close with an image I took this morning of a daylily I wanted for several years before I finally sprang for it.  It has been one of the most beloved daylilies of the past twenty years.  In color class, it is "pink."  Yet when I look at the blossom from the side, I perceive a thin veil of blue, perhaps a layer of lavender only one cell deep.  It gives this perfectly-formed flower an additional aura.  I mean, of course, Charles Pierce's BARBARA MITCHELL. 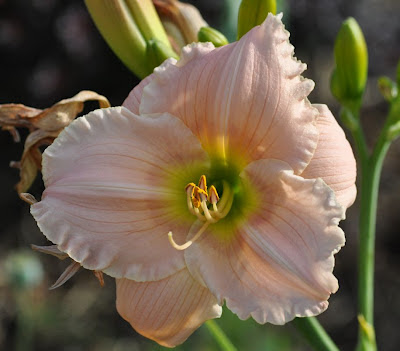 Hello, Michael!
What camera are you using now?
~Nikki Schmith

The unexpected bonus was the new sensor, which "sees" purple floral tones like no other camera I have owned!