For the Love of Landscape

Yesterday the Branco work crew was rained out at noon while fine-tuning the deck frame.  We had a gentle soaker rain all afternoon.  It's exactly what the ground needed, but it's only a beginning of nature's restoration of all the life-giving moisture she sucked out of the ground in the past ten weeks.  Today is one of the happy times to celebrate the renewal of growth in the gardens with members of our daylily club.  We're having a picnic at the finest and largest Victorian-era walking park outside of England.  I mean, of course, Tower Grove Park, near the Missouri Botanical Garden.

We're playing a "take-away" game at the picnic.  It's like musical chairs, but it involves taking away a prize donated by a member, either from the prize table or from another member who already claimed a prize you wanted.  Kathy and I are donating two of my hybrid daylily creations. 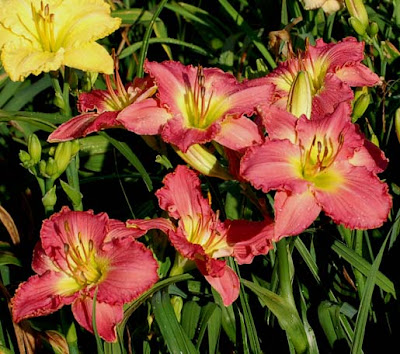 This one is named MOM'S MIRTH for the brightness and bigness of my mother's capacity for enjoying a joke.  I knew the moment I first saw it in 2000 that it was likely to be registered.  I had crossed Bill Munson's very fine COLLECTOR'S CHOICE with my favorite Whatley, ROSE IMPACT.  This 7-inch whopper is bigger and brighter than either parent.  It expresses the form of Collector's Choice and the rich color and veining of Rose Impact, picking up a good scape from both parents and hardiness from Rose Impact. It has four branches and 27 buds. It starts early and usually reblooms in the first week of July.  I call the color "popsicle cherry."  I introduced it in 2010.

The one below is DAVID AND ALAN, my first registration in 2005, also selected in 2000 after I was revived from the shock of first seeing it in a crowded section I was clearing out.  Having heard that CATHERINE NEAL was a superb parent, I took its pollen to every red, purple, and rose daylily in my collection in 1997.  One of the pod parents was Bryant Millikan's CARLOTTA, and that cross gave me this winner. 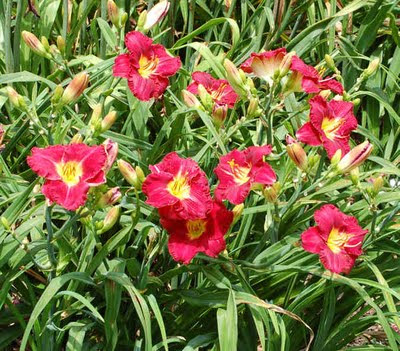 The color of this is a super-saturated cherry-violet blend, quite distinctive in intensity and hue.  It's a vigorous grower, a sun-lover for best performance, and a fine parent to boot!  It has four branches and 25 buds.  It survives, but does not really thrive, in the zone 5a garden of its namesakes, David and Alan, north of Burlington, Vermont in a micro-climate near the shore of Lake Champlain.  It perished in a Zone 4 garden about five miles inland from there.  In some other Zone 4 gardens it can live.  It does best in zones 6 and 7.  I've sent a few plants to warmer zones, but have no information on how they have done.

Plants like these two will be grown into 5-foot masses in our huge back yard, where the view from the house or the deck will require large graphic effects to create satisfaction or pleasure.  Any patterns on the flowers will not be visible from our vantage points.

Here is the view looking left from the sliding glass door of our kitchen/dining room. 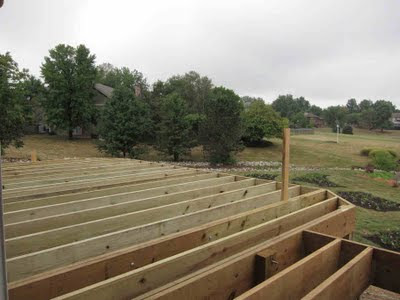 The darker boards show the "Sierra" deck stain I brushed on last weekend.  If the wood dries out by tomorrow afternoon, I'll stain at least the top of the new boards.  I can get the sides done if time permits, or later, but certainly not in one afternoon.  Staining the tops will give some protection when they lay down the flooring boards.

Now, making a quarter turn to the right and looking straight out to Hidden Lake, this is the view: 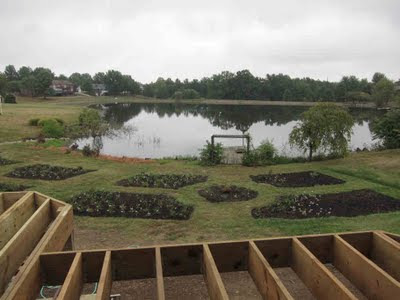 There are too many small clumps of daylilies in the gardens below.  Over time, we'll reduce the size of the collection and have larger clumps with better spacing and a variety of other perennials.  In those "empty" beds to the right, I'm going to plant some peonies and some Japanese, Siberian, and Louisiana irises.
Turning another quarter turn to the right, this is the view of the seedling production and evaluation area: 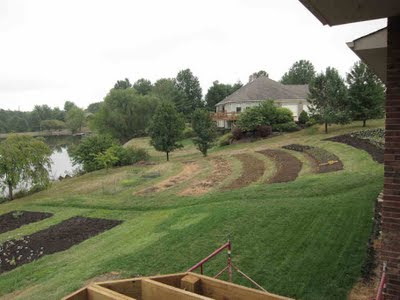 To the far right is an evaluation bed so large I have named it "Nebraska."  Kathy's almost finished applying leaf mulch between the rows of selected seedlings.  Just below that bed is the first of two beds to receive transplanted seedlings I hybridized in 2010 and germinated in a dense planting in one of the lower beds.  The little transplants are mostly of good size for moving now.  They will bloom in 2012 and 2013, when I'll make final selections from this crop.
The heavy clay soil was impossible to till, having baked into brick hardness all summer.  I let the lawn sprinkler run for a three hour session on those beds and the Troy-bilt "horse" tiller made quick work of the task.  Once I broke up the soil, I tilled in two thick layers of leaf mulch to lighten it up.
As I raked the beds smooth for planting, I also made new measurements to assure no more than five feet of width for these garden strips.  The ground-breaking process had encroached by at least a foot into the grassy paths, so I marked the restored boundary with small yellow construction flags.  Once I finish planting the two beds (I am halfway through the crop now), I'll rake a light layer of topsoil over the grassy path and reseed with a fescue mix.
Then I'll till and form the other beds so that side of the property will look neat, and I'll weed the two seedling strips closest to the lake shore.  They are choked with weeds right now.  Kathy plans to get some fall vegetable crops into those extra beds if I'm able to get them prepared soon.
It's work that couldn't be done if we weren't retired and if we didn't love to develop gardens and landscaping.
Posted by Seeker at 9:56 AM

Thanks for sharing your progress with the new garden. Can't wait to see the blooming results next year.