I think he was nine.  I have never kept them straight.  I think Uncle Paul is the youngest, and Paul is still alive, my favorite relative, along with his wife, Aunt Vicki.

Here I am, an acolyte, age 11, with Pastor Bartels at Bethany Luthern Church in Trenton, New Jersey. 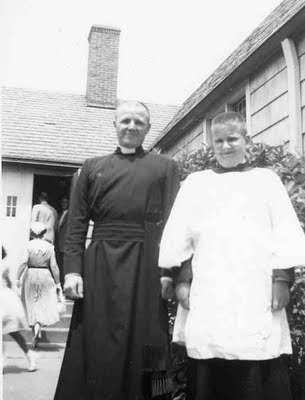 I welcomed the opportunity to cease church attendance when I went away to college.  I didn't resume until I was 52 and my late wife, stricken with cancer, needed to reestablish her connection to a church, though she rebelled against organized religion.  Because we were Anglophiles, loving the sheer beauty of the words in the Book of Common Prayer, we joined an Episcopal congregation in St. Louis and remained members until her death in 2008.

I left that congregation then.  I had seen and felt the ugliness of church politics.

But I had also authored that church's new mission statement as part of a committee working on self-assessment.  That statement began, "We are followers of Jesus Christ, whose example prompts us..."

For me, that was a radical statement, ushering in other radical statements that no one would argue with.  My mission statement contained no assertion of "creed language."  It made no reference to redemption, salvation, virgin birth, or resurrection.  It pointed only to the principle of making oneself a disciple of Jesus and trying to follow the way he lived and preached.

For me, that is what is essential to being a Christian.  It is not about whether an unbelievable tale is literally true.  It is not about faith in the unbelievable.  It is about faith in the rightness of a teaching that made life itself a sacrament and made us all responsible for the stewardship of other people.  "Love" of one's neighbor is stewardship.  It is, first, acknowledgment that their existence is sacramental in its nature, even if their soul is diseased and they are consumed with evil.

In my theology, Easter is pointless if we are to take it as a proof of the divinity of Christ.  I don't have to believe in the Resurrection to have faith in the teaching of Jesus.  I don't have to have an opinion on his mother's sexual history.  He didn't.  He had nothing at all to say about his miraculous origins.  From his perspective, the philosophy of living correctly was at the center of his teaching.

The cross is a symbol of his "walking the talk."  It is a symbol of his absolute integrity.  In that sense, Easter is the essential marker of the seriousness of his life.  Up against the regime, he had to lay his life on the line.  That's why the story of Peter is also essential to Easter.  Peter at that moment cannot walk the talk, cannot risk his life.  Only Jesus could see that if his teaching mattered, he had to stand up to the Powers That Be and take the consequences.

And so he walked into the most gruesome form of death by torture then practiced in the Roman world.

The torture is in the nails.  Death comes from slow suffocation.  When you're hanging with arms above you, you can't properly exhale.  To resist suffocation, the person on a cross must push against the nails holding his feet to the post to try to raise the torso with respect to the arms.  This goes on for hours, while the sufferer also experiences a deep sunburn like no other.  Pain, fear, dehydration, sunburn, shock.  It was a horrifying thing to behold.  I imagine the grief of his mother.  When the soldiers became bored with how long it took, they broke the victims' legs so they couldn't push against the nails any more.  Then their suffocation was assured.

Perhaps Jesus rose from the dead three days later.  Perhaps he ascended into heaven.  In my theology, it doesn't matter.  He spoke of the essential importance of how we behave, not what we believe about his life.  To be a Christian is to listen to what he said.

We are all children of God.  Jesus is my brother.  So is Hitler.  While I can't reconcile that, I don't have to.  I only have to listen to Jesus and see if I can follow along, see if I deserve to be near him.

My sweet Lord.  I really want to know you.
Posted by Seeker at 8:35 PM