It's all about beginning the ending of bad things.  Someone who will not be named had a really, really bad idea one day on the side of the Duckworthy property he couldn't see unless he stepped out on his deck.  "Someone" is not me, by the way.

On that side of the property, a neighborhood storm drainage system empties into Hidden Lake by means of, first, a concrete swale, and second, a ditch of some kind that may once have been lined with concrete.  The concrete part at the top of the hill cracked over the years, allowing water to gradually undermine it, causing further cracking and further undermining and erosion.

The former owner addressed the problem, if addressed is an apt word, by tossing patio bricks into the holes and gaps.  It looks like an extensive patio was sacrificed to provide those bricks.  Other pavers, concrete blocks, and hard things were tossed in over time.

This was the beginning of the Rubble Museum.  At some later time, the owner had his concrete driveway broken up into convenient twenty- or thirty-pound pieces and replaced.  Rather than have the broken driveway hauled away, he thought the pieces would make good rip-rap material for the eroding gully.  However, instead of keeping the shape of the gully concave, so that water could course through it, he mounded up the concrete rubble with a bad consequence.  Water began to run around it.

Also, the continual undermining of the upper part carried dirt down the line to the pile of rubble, where it dropped between the stones, bricks, and concrete pieces, gradually raising the bed of the gully.

A few days ago we had the heaviest rain in the past seven months, though nothing for the record books, and I woke to see most of the back yard covered in the runoff that should have gone down the gully to the lake.  That's when I decided we'd have to close the Duckworthy Estate Rubble Museum and return it to its former glory as a gully.

Yesterday Kathy and I spent an hour and a half or two pulling rubble away from the left side.  We got a lot more done than we thought possible in that time.  I think we can clear  the watercourse in the next couple of weeks and then try to remake it, perhaps with some help.  Here's what it looked like at the end of our first work session.

The orange cord in the foreground is not an electrical cord, but seems to be some sort of cable system no longer in use at our house.  The company that installed it (Charter?) only put it a couple of inches into the ground. 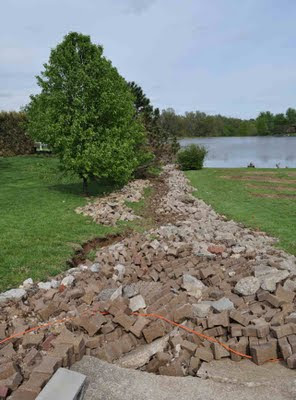 Michael,
I don't envy you the hard labor that lies ahead. Please be very careful with those fingers of yours--at our age joint damage tends not to heal very fast...