Recently I stopped in to see what was going on at an outdoor entertainment venue. I’m glad I had my camera, because what I thought would just be a quick look around became what can only be called staring. I realized that although people of all ages appeared to be enjoying themselves, the play environment seemed like a history park.

The area where I stopped was devoted to the experience of getting into something unusual and getting the feel of it. Here’s a wagon, or half of one, designed for photo ops. People couldn’t resist trying it on for size. 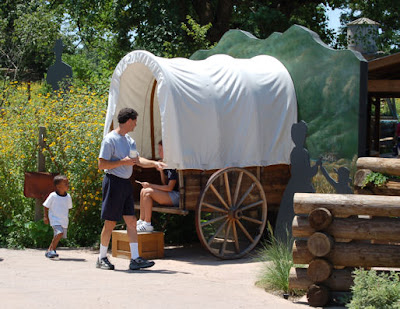 And here’s a dugout canoe that made me wonder of Lewis and Clark’s party had traded for something like this with the tribes along the Missouri River. While I stood there with my camera, the canoe was almost never empty! 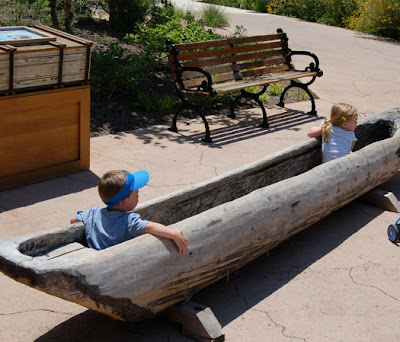 You can see in this next shot that the space people enter is designed in several levels, even though it didn’t have to be. The visitor not only enters the space horizontally, but must ascend and descend to gain passage through it. There is no direct route. Yonder, near a replica Mississippi River boat, I saw children playing in the dirt by a simulated stream. Were they “panning for gold?” I didn’t get over there to find out. And here, bordering this zone of play is an old-fashioned split-rail fence and a big windmill. What museum is this? 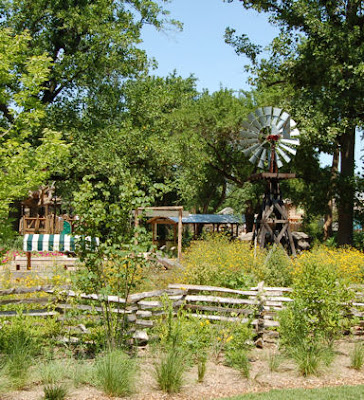 Not many paces beyond this area, I spotted parents and children of all ages enjoying some water jets that were clearly designed to be part of the hands-on experience of this place. 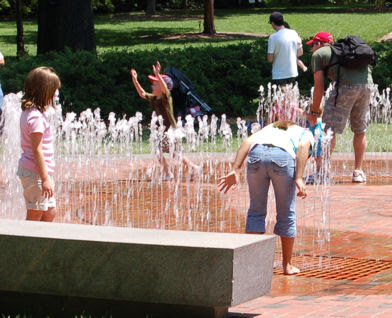 I started to see this environment with new eyes, the eyes of someone who’s trying to teach “visitor-centered thinking.” Here is an environment designed to absorb the energy of children and to gratify the adults who are hoping the kids will have a good time.

What history museum is this? It’s not! It’s a new learning environment at the Missouri Botanical Garden in St. Louis. It is not only hands-on, but body-involved. I saw some kind of tree house that was accessible by a sturdy walkway. Under the tree house hung simulated “jungle vines” that children grabbed and swung on. On the other side of a walkway was a rope bridge between one tree and another, with rope mesh on the sides to prevent any falls. It was not a stable walk, and the instability tempted parents as well as kids. 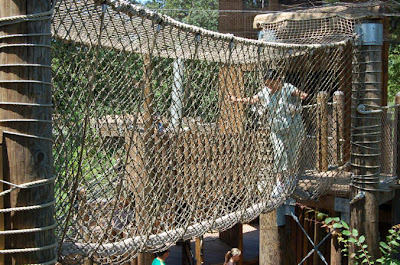 A botanical garden is a prime example of a space that has traditionally served self-guided individuals and couples. In recent years, this garden has devoted enormous attention to the cultivation of tomorrow’s members and patrons. They have invested in family-friendly experiences that are physical, creative, social, and fun. All of this fun impinges not a bit on the self-guided people who are seeking the pleasures of seeing the ever-changing face of this planted environment.

If you are involved in a local museum or historic house, I hope you see something you can use in this photo-blog. Whether you sell cars or operate a museum, your most important product is a good memory. You’ve got to put the visitor’s experience at the center of your thinking. Museum work these days is not about your skill in displaying objects for self-guided learners. It is about your ability to translate everything you know about good hospitality to the cultivation of people’s interest.