Graphic Artist in the Garden

My long-term friend, David Watkins, was already a fine graphic designer when I knew him as an undergraduate at Penn State in the 60s. He married the love of his life, Susan, and moved to make a family, a life, and a career with her at Cornell University in Ithaca, New York. 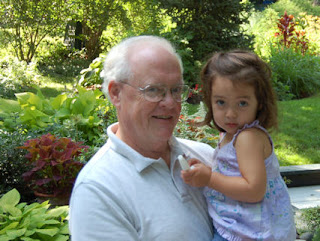 That’s David a couple of weeks ago with his granddaughter, Lily. His garden has been a living work of graphic art as long as I’ve made the nearly-annual visits there with San.

This is a blog about David’s artistic gift, how he creates interest by the art of selecting and composing what is in the frame, for David is an art photographer, too, and we had gone to Ithaca for his big gallery opening there.

Outside, the “frame” is what is on the boundary of the residential lot. Within the lot, David has created a variety of garden beds near a large deck, so those beds have become the “frame” for human interaction on the deck. The beds themselves are framed by deck, lawn, and a pathway. There is reciprocity there. In the small zone where human space meets plant space, David has arranged potted plants as well as a small arrangement of smooth rocks. This part of the garden frame has more human presence than the part beyond it. See here, what you face while standing on the edge of the deck and look toward the slight rise to the back yard: 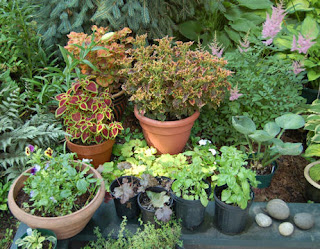 Shift perspective just a tad, and you see David’s eye for color, form, and texture capture your attention. Your eye is compelled into the center of the space by that beautiful rose purple coleus in that rustic-looking pot. 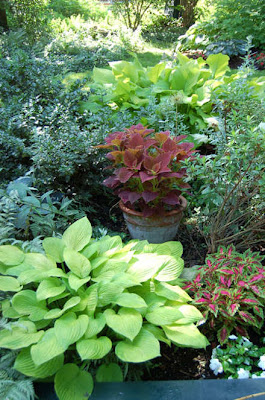 Ascend into the yard and look at that big lime-green hosta, and see how he “frames” the key feature with variety on one side – more kinds of potted coleus – and consistency on the lawn side – a border or silvery purple heucheras, not in pots but “grounded.” We are now in the zone of the yard. 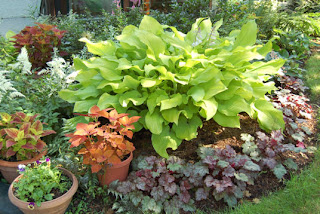 Looking beyond this view, the visitor sees a steep slope down to a pathway that runs the length of the house out to the street. As the overhead canopy produced too much shade for daylilies, David converted the planting to a hosta gallery, each variety planted next to a dissimilar one, the whole bed tied together with large juniper bushes above and small begonias below, with a small border of hand-set stones to buffer the more austere texture of the poured concrete walkway. 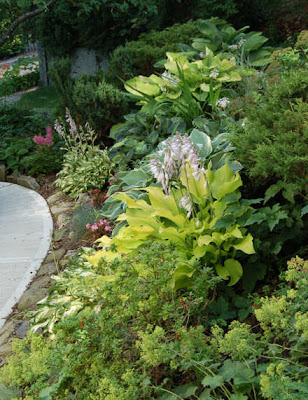 Color, form, texture, composition: the elements of my friend's special talent. In the art gallery, those gifts produce wonderful evocations of what is magical in the zone where the natural meets the man-made. Here is a detail David noticed while visiting somewhere; some tulips drooping next to a plaster wall, like something you would see in a painting by one of the Dutch masters. He made the picture, cropped it to balance the flat surface above the flowers with the place where the wall's man-made curvature meets the natural floral curves, balanced the illumination just so….and it was breathtaking! 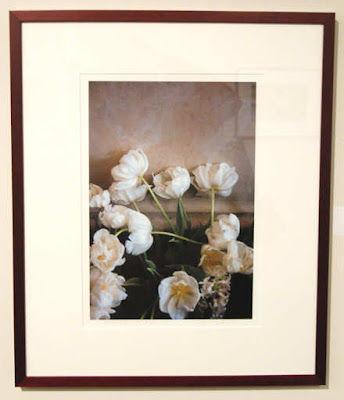 Here is a large photograph he printed on canvas rather than paper, a pond somewhere in Vermont, utterly simple as a graphic statement. 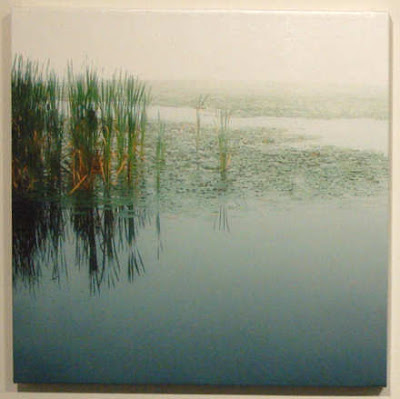 Finally, here is an example of graphic manipulation of the image to move along the path from realism toward abstraction. He has used computer software to subtract visual detail and enhance what remains, but not so much that you have left realism entirely. I have watched him work on images in his studio, tweaking this and that to see how it will affect the image, and finally settling on an array of choices that represent what the artist’s eye sought out. 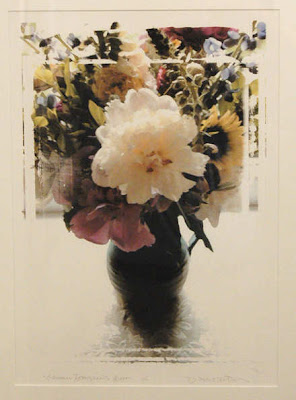 your plants look amazing. They are very pretty.