I've been sleeping a lot the past few days, nursing four broken ribs, and I got up early this morning and have time on my hands, so here's a memoir or memo about my short and curious path as an aspiring soloist in the field of Classical Music.

When I declared a major in Voice back at Penn State, my voice teacher, Raymond Brown, had no idea I had done so and was demonstratively shocked and even appalled when I told him at the end of my junior year that we had to be thinking of my Senior Recital.  Yes, I had musical talent and was quick on the uptake.  Yes, I had a serviceable voice for choral work.  Yes, I was performing as a singer-songwriter at a local coffee house, so there was no doubt that I had stage confidence.

But my voice was not a "big" one, and it didn't have that penetrating quality called "ring" in the business of singing.  Since "ring" had eluded Raymond Brown, too, he didn't have any idea how to help me establish it in my own voice.

During my senior year I showed that I could master a full recital of classical music in several languages and perform the music creditably, though not with a voice one could imagine moving toward a professional career.    I was a natural leader, too, and so I was accepted as a graduate assistant in the choral and vocal area at Penn State, and proceeded to absorb a large amount of information, repertoire, and conducting experience. I imagined I would grow into whatever I needed to become.  Maybe I would develop into a university professor who gave annual recitals, performed oratorio solos, and conducted large and small choirs in important music.

Such is the biography of dreams.  Several years later, when I was a young teacher of college voice and choral music, I realized that 99% of the students who enrolled in vocal study did so because they identified themselves with singers and liked the idea of singing, not because of any objective notion of their native ability or equipment.  "I like singers, therefore I shall be one," or "I like the adulation my favorite singers get, therefore I want that adulation, too."  None of it points toward a career, but why should it?  People can spend their college time as they wish, pursuing fulfillment in areas where they have little chance of making a living.  I sure did.  There's no guarantee of a job after graduation, just a pathway to become better and more aware, perhaps more curious, in something you like.

Rather than take this as a critique of higher education, one can take this as a set of opportunities for human development.  I knew I wasn't training the professional singers of tomorrow.  My task was to awaken the artistic sensibility within them and show them how to commit themselves to producing a musical line that could convey emotional meaning.  I showed them ways of thinking and working, how to study.

It's amazing how self-discovery in one field can lead to a transfer of skills to many other fields.  If we do well at cultivating the intelligence and character of a student, a great many doors may open.  In the moment we have, we should awaken something.

Another side of the coin is the disconnect between exceptional natural voices and the intelligence or inclination to do anything with them.  I remember a student named Tim who startled me with the quality and size of his natural bass voice.  He was an indifferent vocal student and had no interest in exploring the possibilities of that magnificent instrument.  Did it therefore "go to waste?"  Only from my perspective.  From his perspective, it served the purpose of speaking and allowed him to develop friendships based on conversation.  Also it added one imponderable dimension to his self-image, a "what might have been" dimension.  Who knows whether that tipped the scales for the good farther down his path?

I have a memory from my graduate study that serves as an anchor for the biography of a "utility singer" rather than one of the big frogs in a pond of whatever size.  It was decided jointly between the Music Department and Theatre Department that the annual opera production would be Mozart's "Cosi fan Tutte."  Some thought may have been given to the problems of casting the opera.  Looking back on the available talent, I think they were nuts to consider any Mozart opera.  For one thing, the University Orchestra was not of a level that could have played any Mozart enjoyably, let alone a full opera.  For another, the casting would have necessarily been so uneven as to bring shame on the Music Department.

I auditioned for the baritone role of Don Alfonso and was not cast.  A Brazilian student with a deep, true bass voice got that role.  I'd never heard of him before; he was in another studio, but the voice was commanding.

Shortly after the casting was announced the plans to mount the opera were cancelled.  It was announced that we would perform Benjamin Britten's "The Rape of Lucretia," an opera with smaller requirements for orchestral virtuosity that could be well-played by the available musicians.  I auditioned for the baritone role of Junius and was not cast.  That part went to a tenor in the graduate program who was being transformed, to horrible effect, into a baritone by a voice teacher who had no ability to teach but some ability to sing occasionally in a large opera house.  The stunning Brazilian bass got the bass role of Colatinus.

The holidays came, people went home to work on their music and come back ready to start rehearsals in January.  On the first day back in school I was invited to meet with the assigned conductor of the opera and have a chat.  I learned then that the Brazilian bass had not returned to the U.S. and would probably not be seen again and that I was needed in the bass role of Colatinus.  I did not have the self-knowledge at the time to realize what a ludicrous proposal this was.  Sure, I could sing a low F once in a while, but it would be the low F of a light lyric baritone, not the low F of a real bass, and there was a question whether most of what I would have to sing would be more than minimally audible, though I did not know this was a question at the time.  "If you can sing it, they will hear" seems to have been my self-delusional idea.

I accepted the offer, worked up my part, and started rehearsals for a production "in the round" with the orchestra behind a screen off to one side.  There would be scant opportunities to ever see the conductor.  We all had to learn the opera "by ear," which we did.  I'll show you a picture now of the icing on the cake. 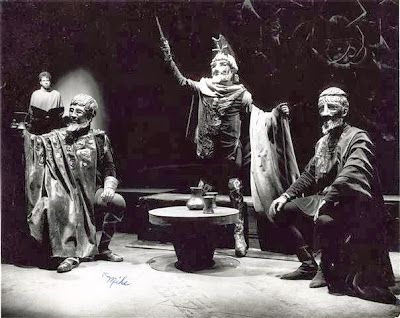 In the background is my classmate, the late Tommie Lee Irwin, in the role of Male Chorus.  You can see Tommie's face and the fake beard they glued on.  I am on the left, Tarquinius is in the middle, and Junius is on the right.  It's the opening scene, "Who reaches heaven first is the best philosopher!" The main characters in the opera were all given face-covering, hard masks, and the men were given rigid beards shaped around coat-hanger wire or something and then glued onto our jaws.  It is surprising that it was possible to utter any sound at all.  Usually, the human face is an important part of an opera performance.  Masking us took away one potential element of dramatic interest.  The staging was static.  The singing of the female parts was often beautiful.

The whole thing was such an obvious debacle that what should have been a minor sung comment following the rape scene became a laugh line.  The woman who sang it had a Long Island accent, and she had not been schooled in how to sing the phonetic "schwa" vowel.

There are many gradations of the schwa sound.  One of them is the sound of "thm" in the word "Rhythm."  It's neutral sound, not exactly "ah" or "uh" or "eh" but shaded one way or another to make the word sound graceful when sung.

The laugh line was "You were right; Tarquinius took one of the horses."  Sung properly, the word "horses" has a finessed "r" and a schwa in "ses."  But our Long Island colleague rendered it in a broad New York sound, as in "Whore Says," with equal stress on both syllables.  Probably dozens of people retained a memory of that blooper for cocktail conversation years afterward.

I took away a resume credit for my budding "opera career," and as I added opera credits over the next several years, the only roles that made any sense at all for my voice were Ben in Menotti's "The Telephone" and the judge in Gilbert and Sullivan's "Trial By Jury."  Every other assignment amounted to absurd casting, come what may.

That's what happens when you're a "utility" singer.
Posted by Seeker at 10:10 AM

Email ThisBlogThis!Share to TwitterShare to FacebookShare to Pinterest
Labels: miscasting, The Rape of Lucretia, utility singer