In the year 2000 I developed an irregular-shaped bed of daylilies at The Green Center in University City, Missouri.  I had promised to mix other perennials in with the daylilies, and in fulfillment of that promise I bought a Crimson Pygmy barberry bush of small size and planted it as a focal point at the rounded end of the bed.  You could call the shape of this part of the bed a "finger" or some other long body part.  I imagined the barberry bush as a background for viewing the daylilies planted all around it.  One of the most effective combinations involved a seedling of mine that I later named PEPPERMINT WIND. 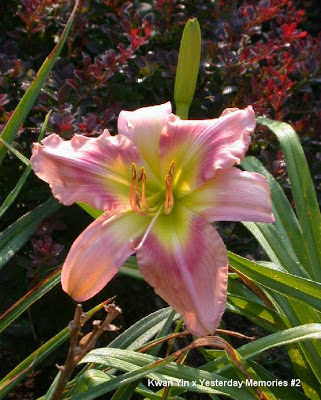 In this picture, the barberry bush makes a "jeweled" background for the daylily blossom.  The picture would be blah without it.

In our back yard I made sure to design a circular bed with a Crimson Pygmy barberry in the center of it.  The circle is ten feet across, so there is room for a ring of daylilies at the edge.  I'm using white, pink, rose, and lavender colors in the daylilies.

At this time of year, the hardy geraniums named Rozanne are growing lush and nuzzling up against the barberry, making a most companionable impression on my imagination this morning. 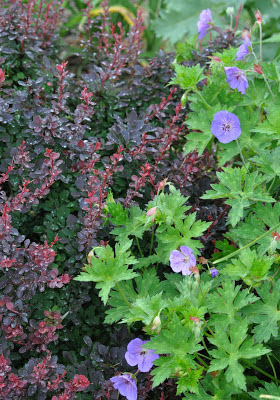 Outside our garage we have mixed perennial beds along the concrete.  At one location, I planted a group of lavender plants -- Hidcote and Munstead.  In March this year I pruned them back, so when they began to grow in spring they grew lush and bushy.  This week they're coming into full bloom along with a raspberry colored Yarrow plant snuggled in close.  I love the look of this snuggling! 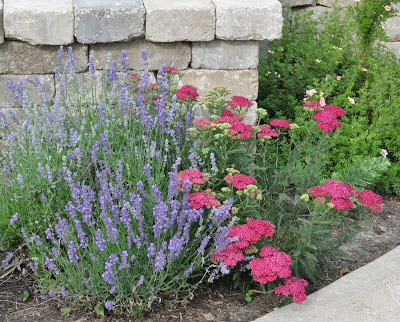 I find it hard to put daylilies into companion relationships, though I continue to try various ideas. This is the early daylily Bitsy with an intense garden phlox next to it.  This isn't going to work until the phlox group is thick.  At the moment, there's no backdrop, just a random blurt of color. 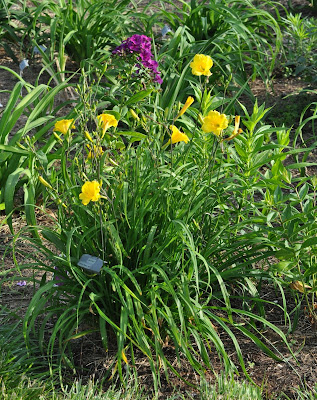 The real success with companionable garden designs are in our two berms, which Kathy manages.  She's working out a scheme to provide continuous color.  A week ago, the pinks were providing the main accent.  There's also the interest of three redbud trees, three Fire Chief arbor vitae bushes, and masses of Russion Sage growing larger day by day. 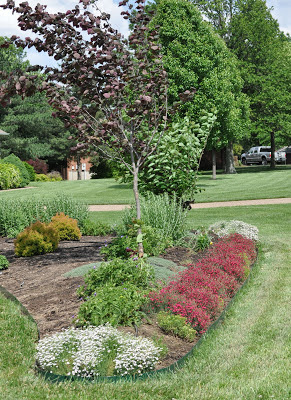 We also have companionable animals in our lives here.  There are at least two birds' nests attached to the house, humming birds at our feeders outside the kitchen window, and a trio of ducks that our neighbor gave his wife a year ago as an Easter present.  They have adopted or appropriated our back yard as a second home, and they especially like the companionship of the scant shade under one of our smoke trees. 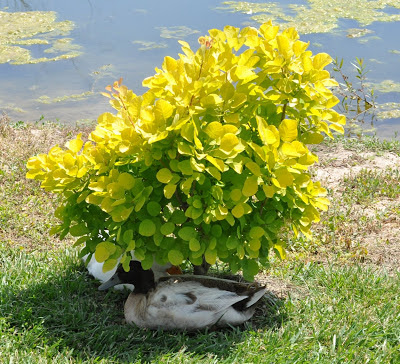