No Longer Winter...Not Yet Spring 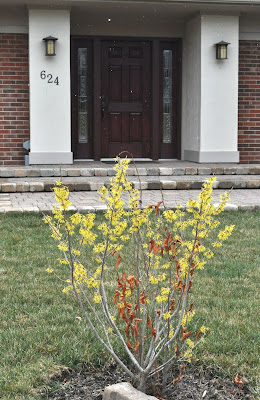 You may ask, "what's so special about a Witch Hazel bush with dead leaves on it?"  I will sing the answer: "Tra-la!  It's alive!!"  We planted it last Spring during the freaky weather, the unseasonable heat and drought that tried to kill all the trees and shrubs we had just put in.  But we discovered "tree gators," the plastic circular reservoirs of water that release water around the base of the plant at the rate of about 15 gallons over about five hours.  We bought them toward the end of July after we saw them in use at the AHS National Convention in Ohio.

Shazam!  All the trees and shrubs went from nearly dead to vital and alive within two weeks.

We planted this beautiful Witch Hazel to grow into a large color accent when there is virtually no other color on our landscape, placed it where we would see it every time we open the front door, placed it so the front door and stonework would make a "frame" for it. 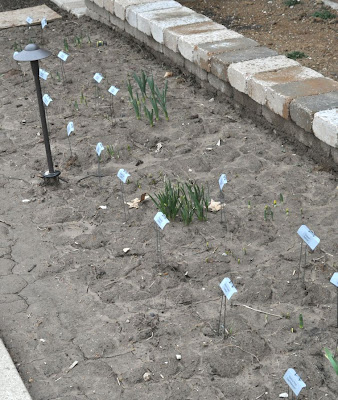 In front of the stonework on either side of the door is our new daffodil garden, featuring the bold creations of our friend Dave Niswonger from Cape Girardeau.  Dave began hybridizing irises sixty years ago, then got into daffodils, and then got into daylilies.  In the next week or so we'll have some pictures to share on the blog. 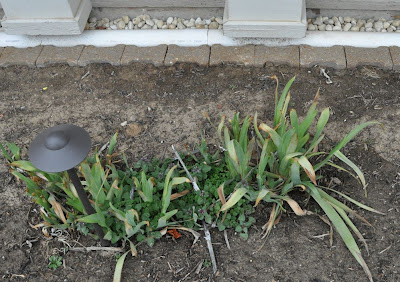 We have an old-time tall, blue bearded iris clump in front of the garage.  This one made the move to Missouri from Vermont in 1996, and from University City over to our new place in St. Peters because its tall stems don't need staking.  What would March be without the surge of growth of a weed called Henbit?  There it is amidst the iris clump, and it's coming into flower, which means I've got to pull it right now or see a lot more of it next fall. 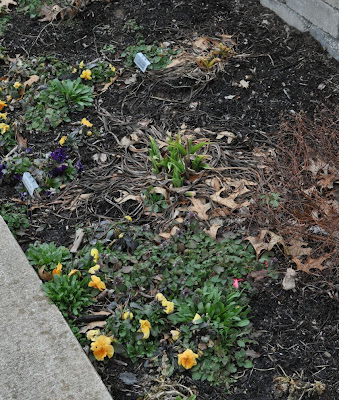 Finally, just down the walkway from the irises, the hardy pansies we put in last November are about to spring into active growth.  That daylily in the center of the picture is my red SAN PICKED ME.  It's dormant and it seems to be among the first daylilies to wake up and resume growth.  Sooner or later this bed will be lovingly groomed, but for now, in this time that is no longer winter and not yet spring, I'm waiting with the seasons.
Posted by Seeker at 12:52 PM

It's great to see it survived. We're still waiting to see what's going to come back in bloom in our yard this spring. We've seen a little life, but I think we're going to loose some too. It was a dry summer and a brutal winter.