It's early December and I'm thinking of an early December in 1995, the year I came to St. Louis.  The afternoon had been mild and I'd driven over to Edwardsville to visit my cousin, Marge St. Pierre.  A cold front blew in while I was there and I used the heater and defroster in my car on the half-hour drive back to St. Louis.  The temperature fell through the floor after I parked the toasty-warm car, and the next morning I found my windshield had a big crack across it.

We are having no such December here, not yet, though I hope we do.  Indian Summer is supposed to happen in October.  We've had it in the past week.  We've had enough nights in the low twenties to kill most of the daylily foliage, but we've had enough warm days around seventy to make some of those plants put up new leaves.

Yesterday I thought I'd document our salad garden, Kathy's prime accomplishment of the fall, but I got sidetracked by the geese who had been sampling the grass by the lake shore.  As soon as I walked out with my camera, they took to the lake. 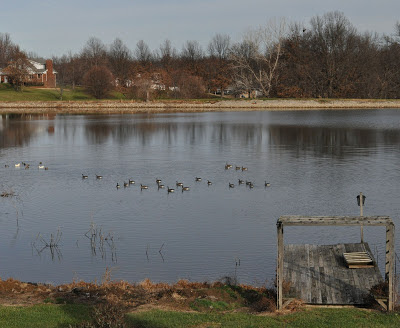 The big white ducks out there were Easter presents from our neighbor to his wife.  For a while they acted like they thought they could keep the lake to themselves, but now the visiting team outnumbers the home team by a lot and they've all made friends.

The raised veggie beds have been more fun for Kathy and more good eating for both of us than we imagined. 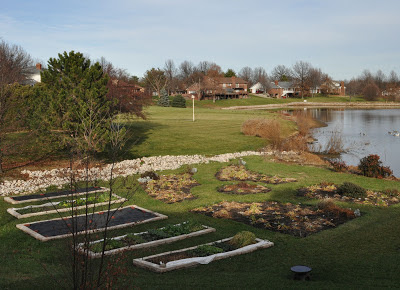 She planted three of the beds with cool weather crops just to try out her planting methods and ideas. The green beans were the first to die from frost and we never ate them.  The peas were arrested in their development, and we didn't eat any of them, either.

However...there are gallon bags of greens in the refrigerator, and we've been eating off them for the past three weeks. 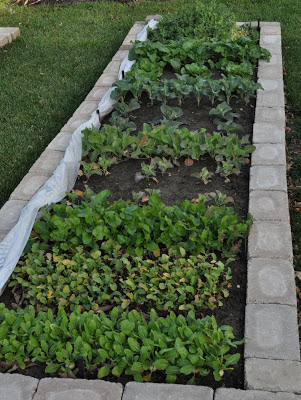 Kathy tried several varieties of lettuce, spinach, arugula, radishes, etc.  They're planted in dense areas of the bed, which is narrow for easy weeding and harvesting without stepping on the dirt. 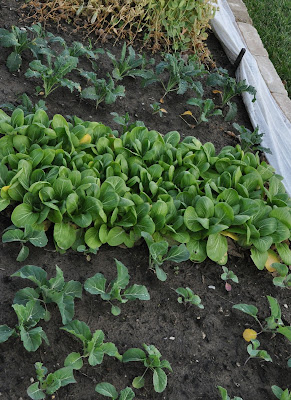 I held the camera at a wonky angle to get this picture.  I hope it doesn't make you dizzy!  The colors and forms of these edibles are a wonder to me. 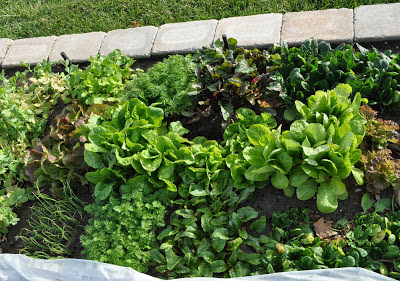 I had not thought we would have a hard time keeping up with the yield of such small beds, but you can see here that Nature likes to provide a bounty when the weather favors growth.  Color!  Form!  Texture!  Taste!

Kathy makes a salad of these greens with some chopped radishes, chopped celery, and store-bought hearts-of-palm, and we dress the greens with a balsamic vinegar and olive oil dressing into which I place four masked cloves of garlic and about a tablespoon of country style Dijon mustard.

Wonderful inspiration for us Michael! Thanks for sharing...pic are so clear and your landscaping looks terrific!
Nancy O

You and Kathy have been harvesting and eating the just rewards of your summer and fall labor. Congratulations!