Yesterday we escaped the heaviest of the weather that swept through this region from noon until after midnight.  We had some hail, but nothing as bad as the baseball-sized chunks that fell a few miles east of here.  The hail did not break the skylights over our living room, and our house took in no storm water.

We had fierce winds and heard the tornado sirens around dinner time, but suffered no horrible twists of fate such as those people partying under a large tent in downtown St. Louis.  One person died, several were critically injured when the tent collapsed.

We suffered some mere setbacks in our landscaping.  I lost a few hours' sleep because the ferocity of the final rain around 2 a.m. gave me a scare.  It was so hard, I imagined it was hail.  Daniel Koenig, my nurseryman, told me today that we had four inches of rain yesterday.

This post is a survey of what the storm has taught us about heavy flows of water on our sloping ground.  When we went outside to see if our potted flowers had been trashed, we found very little sign of a hail storm.  Kathy's newly-planted window boxes were full of intact petunias. 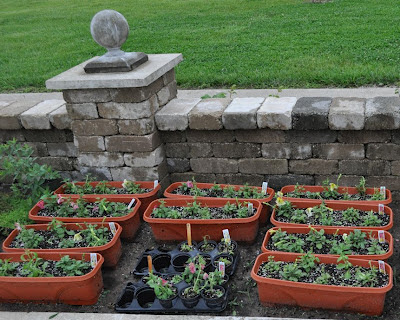 When I walked down the driveway and looked left, I saw that the wind had taken down the best of our three Redbud trees, planted last May.  It had the fullest foliage and presented a "sail" to the gust of wind that snapped the trunk in spite of two supporting wires.  I sawed it off just below the break and dragged the beautiful top over to the driveway. 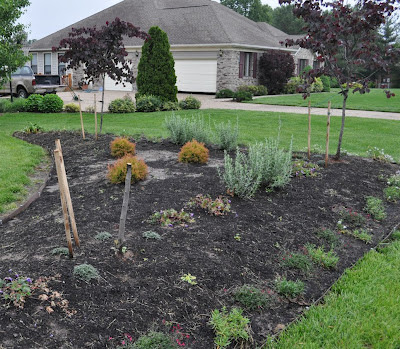 The storm drainage swale that we cleared of excess rubble and debris last month was somewhat rearranged by the force of water flowing off the neighborhood and down this channel to the lake.  Many of the large stones that used to serve as a reinforcing wall on the left bank were pushed down to form a dam, and the channel was deepened there. 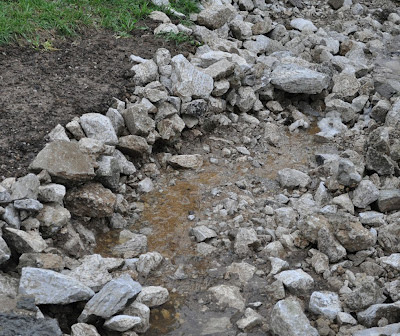 The water dug out the right side, too.  This is an awkward spot where the former poured concrete broke up and collapsed.  The debris that was pushed away formed a mound in the center and helped create that new flow on the left. 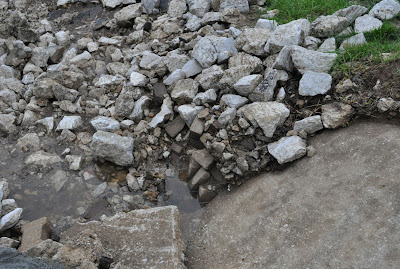 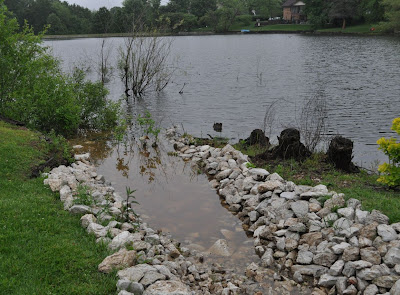 Looking directly to the right from there, you can catch a nostalgic glimpse of a piece of old Highway 94.  Last week I dug that piece out of the garden along with a companion piece just as heavy. 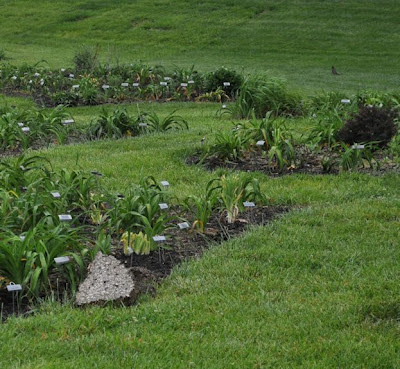 Just when I thought the Rubble Museum was closed, up pops another donation to the collection!

The most pressing landscape challenge now is deflecting and channeling storm runoff on yonder hill, where I grow my seedlings. 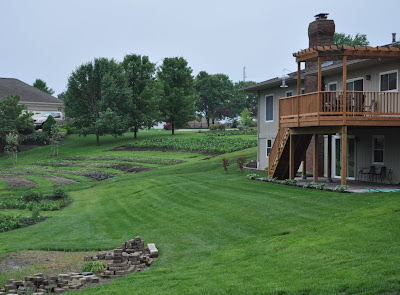 The darker green area in the picture below is sod I laid last summer after I dug a drainage swale to channel water coming over the road from the upper neighborhood.  I can see from this vantage point that there is a slight hump at the top of the hill in the middle of the picture frame.  Water flowing down from the left side of the picture is being deflected by edging I installed at the end of the summer.  But water coming down from the middle of the picture is flowing straight down the lighter green grass and over the seedling beds in the foreground.  The short-term fix will be to deflect the flow with some edging material.  Long-term, I think I'm going to need to contour the light green area just enough to create a flow to the right.

The seedling bed planted this past week lost some of its surface, and maybe some seeds.  The next bed up was empty where the water flowed over it. 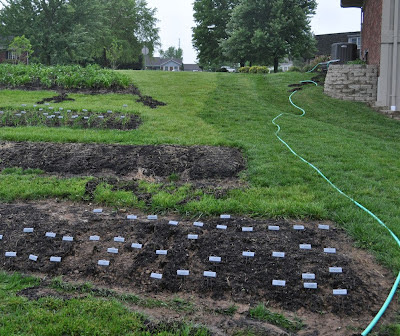 The left side of these seedling beds is also a problem. 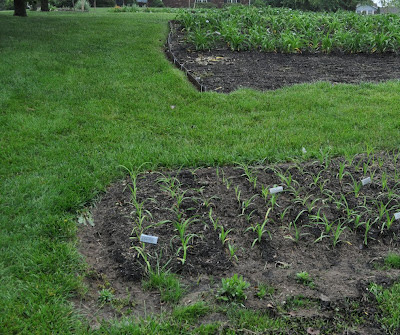 The edging material on the side of the keeper bed protects the unplanted area from runoff, but the runoff is not stopped effectively by the raised edge of the seedling bed in the foreground.  There is additional water flow off a neighbor's yard to the left.  Again, some edging material to deflect the water is the short-term fix.

Much of the washing-out in these beds was a consequence of a torrential straight-down rainfall.  The same thing would happen if I were watering with a wand and didn't know when to pause or stop for good.  In a few seconds the ground becomes saturated and then everything else runs downhill.

Yesterday the new magnolia trees came into bloom.  The flowers were undamaged by the hail. 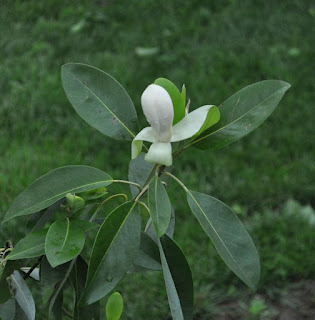 Wow, Michael! You certainly got a big lesson about water flow dynamics from Professor Storm... Fortunately, you are a quick learner.

In Creve Coeur, the same storm dropped only .8 of an inch of rain, plus a few minutes of quarter-sized hail. At our daughter's, just south of Maryland Heights, the hail was the size of baseballs--and yes, they took photos.

May May be gentler to your gardens.