(I wrote this for The Missouri Humanities Council Passages on November 1, 2005)


In the religious tradition I know best, today is All Saints' Day.  It is a good time to remember people who have illuminated the life of humanity, with good example, with inspiration or vision, or with self-sacrifice, or with any other good thing given beyond the usual measure that is within each of us to expend, or not, depending on our power to express something that I will call "the energy from God."

I am studying two requiems this fall with the St. Louis Symphony Chorus.  One is the Brahms German Requiem, completed in 1869 when he was thirty-six.  It is my favorite piece in all of classical music. I have performed it twice in the past six years and will perform it next in St. Louis at the end of March and again on April 1 in Carnegie Hall.  Aside from the beauty of the music, I find the Brahms German Requiem to be, literally, a sacrament of healing in which each member of the ensemble is a celebrant.  I don't think a listener can get inside this music as the performer must, and so we who sing or play this work are the high priests of a divine energy of healing that Brahms bestowed on humanity.  Today I thank God for the gift of Johannes Brahms. 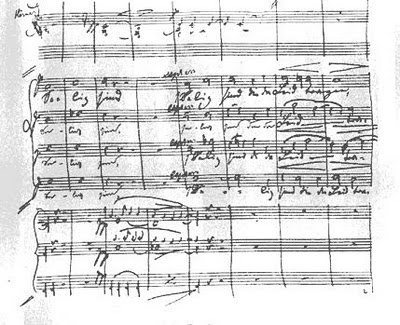 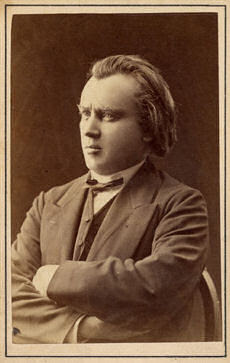 Johannes Brahms in 1872, three years after he completed his German Requiem, and his draft of the first chorus.
We are also performing in the same concert a 25-minute piece by John Adams titled, On The Transmigration of Souls.  The piece was commissioned to memorialize the many lives that were destroyed on September 11, 2001. 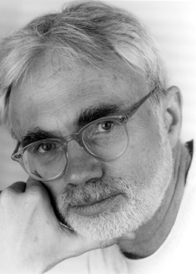 Our chorus has spent eight hours studying this work so far and we just about have it down.  The better we know it, the more difficult it is to sing it, because we empathize with the voices of survivors who are trying to deal with sudden grief and horror.  "I wanted to dig him out...I know just where he is!"  "He was tall, extremely good-looking.  The girls never looked at me when he was around."  "She was so full of life."  "I loved him from the start." A recorded tape plays sounds of street traffic, footfalls on sidewalk, a recitation of the names of the dead as we sing.  The text is presented in broken fragments, typical of John Adams's style, but so appropriate to the destruction of sky-scrapers.  In the final minute our voices become the souls of the dead, I think, as they approach heaven and say, over and over again, "Light!"

I have sung many requiems.  When I hear a section of a Fauré Requiem where the women sing about a chorus of angels, tears usually begin to form.  But I have never sung the War Requiem of Benjamin Britten (pictured below). 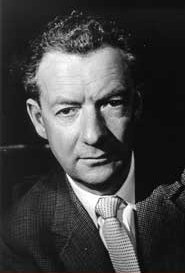 I remember the night I first heard it.  I was home from college for Christmas vacation, my junior or senior year, 1965 or 1966, and the Vietnam War was still in its early stage.  The fall of Saigon was ten years in the unseen future.  Our government was not yet speaking about "light at the end of the tunnel," or "not coming home until we nail the coonskin to the side of the barn."  (My high school classmate, Lee, a wiry little wrestler, is still alive in my memory.  His name is carved into the Vietnam Memorial in Washington.  I found it there.) I was reading a new biography of Handel, listening to my FM radio, when on came a live broadcast from a church in Philadelphia, a piece I had never heard of, the War Requiem.  I was transfixed by that experience.

Several years later I bought the recording with Britten conducting, his friend Peter Pears singing the tenor part that Britten wrote just for his voice, and the incomparable German baritone, Dietrich Fischer-Dieskau.  I ordered an orchestral score to follow and a vocal score to learn.  The War Requiem includes poetry by Wilfred Owen, a minor English poet whose brief experience in The Great War transformed him into a major literary voice.  He was killed in that war, a candle snuffed out, another saint to remember today.  I recall bits and pieces of the poems in the War Requiem.

"The pity of war, the pity war distilled*," spoken by a ghost who meets the ghost of his enemy in a poem that begins, "It seemed that out of battle I escaped/Down some profound dull tunnel long since scooped."  The two ghosts meet and one says to the other, "I am the enemy you killed, my friend."  Pity is, perhaps, a word that Owen found after a lengthy search.  "Hell" would have been obvious, but "pity" carries weightier meaning, and "distilled" combined with "pity" creates a sense of the density of sobbing for the reality of violent, life-sucking conflict.

Almost every night the News Hour concludes with a silent memorial to the U.S. soldiers who recently perished in Iraq.  Their photographs are displayed, their names, their home towns, and their ages.  We grieve for them and for their families.  "Neither wrong nor right," I think of this war (and all wars), remembering a poem by Robert Frost, out walking through his dark night of the soul..."And further still at an unearthly height/One luminary clock against the sky/Proclaimed the time was neither wrong nor right./I have been one acquainted with the night." **

I am not writing about U.S. foreign policy.  I don't know if our government was wrong or right to start the current war.  I can wish it hadn't happened, but I can also wish that we lived in a world where there was no need for soldiers, no fierce competition for the world's resources, no terrorists, no vainglorious pride, and no foolhardiness.  I harbor a long list of wishes.  If they all came true, there would be no people in this wished-for world, including the one who wishes.

We live at a time when the idealism that resides within the idea of America is challenged by what some might call "urgent realities," where a U.S. Senator who experienced torture as a prisoner-of-war has to argue, persistently and against resistance, that the idea of America goes down the tube if our government sanctions its own use of brutality and torture for whatever reasons.

I don't know if there is a more urgent national question than this "idea of America."  Societies live and die by the myths they internalize about themselves.  By "myth" I don't mean "lie."  The United States is united by many things....the same TV shows, same music, same money, same fast food, same stuff in Wal-Mart, same national laws, and by a constellation of national myths...equal opportunity, equal justice, land of the free, "this land is your land/this land is my land," duty to country, nation of laws, exporter of democracy and freedom, exporter of civic ideals.  At issue is whether the myths we live by can endure if we officially permit acts of brutality on our prisoners.  On both sides of this debate, people are talking about results and possible consequences.

I think this battle is over a myth of nobility, argued by knights, a myth that one side finds unrealistic and impractical and the other side finds indispensable to our national sense of honor.  If we abandon that myth, what sort of "We the People" will we become, and what sort of soldiers will we send abroad to export American values?  We must be noble in our practice of horror, says one side.  We must match the enemy's brutality, says the other.  I think we have imagined ourselves as the senders-forth of white knights, "a few good men."  What sort of people would send forth soldiers cast in the image of Darth Vader?  Our movies mirror our myths.

Wet, cold, hungry, scared, stricken with grief, Wilfred Owen conjured a revision of the story of Abraham and Isaac, where Abraham has a notion that his duty is to offer his son as a sacrifice to God.  The original myth has God speak to Abraham at the crucial moment, having tested his faith, and tell him to spare the child.  In Owen's revision, an angel says, "Offer the Ram of Pride instead of him." The poem concludes, "But the old man would not so, but slew his son,/And half the seed of Europe, one by one.***"  In Britten's music, the baritone and tenor soloists repeat, and repeat, and repeat "half the seed of Europe" and "one by one."  The phrase "one by one" is staggered, one soloist overlapping the other's iteration, as if the echoes of sorrow and pity were never-ending.

For those in the way of harm, it may seem as if the sorrow, pity, and confusion is never-ending, and they would be right.  They are staring at the face of the Pity of War.  The History of Peace is a smallish volume.  Civilization is so very fragile.  It is an idea, actually, civilization, another myth we live by.

Hundreds of us who sing are about to brush up our performance of Handel's Messiah for the holiday season.  We will hear the Biblical question that echoes down the ages from the most ancient of times, "Why do the nations so furiously rage together?  Why do the people imagine a vain thing?"

I think of those bright faces at the end of the News Hour, candles extinguished in the service of country; some "tall and extremely good-looking," some not;  most of them younger than my own children; all mourned, grieved, missed terribly, remembered on a day like this and on any other day. They were rays of divine light from the beginning.  They are rays shining in memory now, rays united with
The original light,
With light,
Light! 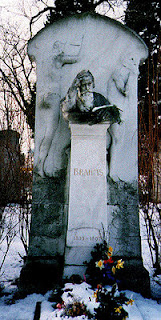