Safe Stairs, and What We Can Imagine 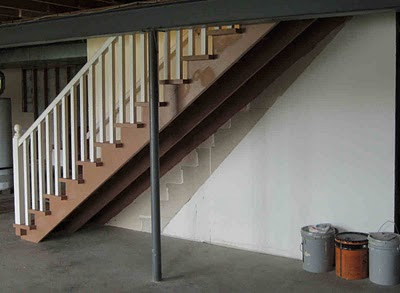 These are our new "safe stairs."  You can see the outline of the old "unsafe stairs" on the wall underneath the new set.  They are probably the most important job within a 6-month remodel project that finished yesterday.

On our first visit to this house, we made mental notes of what we would correct and improve if we bought it.  The stairs and bathrooms were at the top of the list.  Other things were added after the formal house inspection.  Still other things came to mind when we realized we would have to rid the dwelling of the smell of cigarette smoke, which we hadn't noticed on our first visit.  That part of the project involved ripping out all the shag rugs and throwing out all the textile curtains.  We washed down every surface, primed with an oil-based primer.  Primed again with a water-based primer because the colors were so dark.  Then painted with a coat or two of premium finish paint from Benjamin Moore.

The safe stairs are a masterpiece.  I do not fear that one of us will stumble on them. 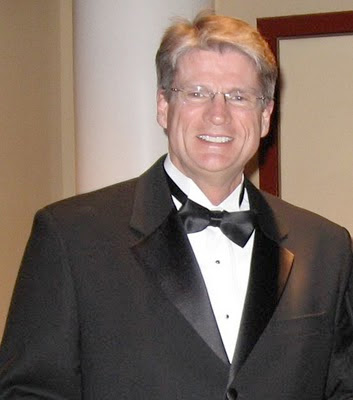 This is my friend, Richard Ashburner, who passed away last Friday after coming down with a sore throat three weeks earlier.  He was the manager of our symphony chorus, and his manner of working and enjoying life were uplifting to all who knew him.  He was a gifted manager, generous with the well-timed witicism as well as an encouraging phrase after an audition.

I suppose Richard never imagined that in his excellent physical condition he would not be able to "throw off" or "get over" the fever he developed.  Three days after coming down with his sore throat he was in the ICU at the best hospital in St. Louis.

Richard consented to be heavily sedated, with a ventilator to help him breathe.  I suppose he imagined he would wake up in better shape...no more fever, easy breathing, and quite a tale to tell.

But alas for the things we can't imagine.  Alas for bad luck.  Richard had a systemic infection, not just a case of pneumonia.  He was dangerously ill, with woefully narrow odds of survival, just "out of the blue."  He hadn't run himself down, done something taxing in awful weather.  He had simply and unwittingly crossed the thin line that separates ordinary experience from the end of experience.

I am grieving for my friend and at the same time celebrating the way he lived his life.  Had Richard been killed by a drunk driver, I would have a target for my anger that he died young.  But how do you rage at fate?  How do you club a thin, invisible line, the one that separates "safe" from "mortal peril?"

Driving to his funeral Tuesday morning to sing in his honor with the symphony chorus, I found myself warming up with the closing passage of Mahler's Kindertotenlieder, the "Songs on the Death of Children."  I had met Richard's mother, sister, and brother the previous afternoon.  Richard was someone's dear child.

The way I hear that passage, the final "they rest, they rest" has the character of a halucination; it sounds like children's sing-song, and then the mood grows bleak, resigned then, resigned to inconsolable grief.