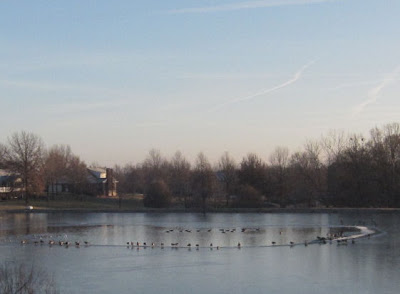 Hidden Lake has been frozen the last few days.  This morning when I got up I saw ducks keeping the circle of unfrozen water open, while the visiting geese watched from the ice's edge.

The ice on the right was curiously white and crystaline, looking like salt on a Margarita glass.  So today, Hidden Lake is Lake Margarita.

Today was the warmest day of the week, with 50 degrees predicted for the afternoon.  I wished the ground were dried out enough to fire up the rototiller again, but it's still too moist from the big rains we had more than a week ago.  After I painted the master bedroom, I went Christmas shopping.  Meanwhile, Steve and Tim worked on the second of two new windows for our big living room. 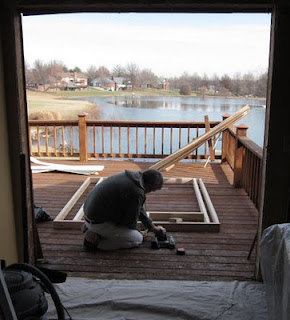 There's Steve Brandt finishing up the frame for the 4-foot-wide window that will replace a redundant, 6-foot-wide sliding door.  The frame was perfectly square, but the opening wasn't.  That's no surprise. This house is a case study in careless construction.  Steve has corrected innumerable faults as he has rebuilt the bathrooms and shaved floor joists to give us level subfloors. 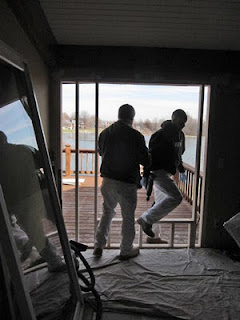 Now the frame's in place.  It's not ready for the window, though.  Steve has a pair of laser levels to check the frame before he screws it in place.  Part of his framing is compensation for poor construction of the house.  His new frame adds strength and stability to an unsatisfactory area of the original frame. 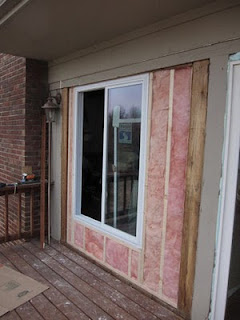 Voila!  After many small adjustments to the window's aluminum frame, it achieved a "perfect" fit to the wooden frame.  Steve was satisfied and happy with it six hours after he removed the sliding glass door.

The reason to hire a meticulous builder is so you don't lose sleep worrying about the project.  Steve is phenomenally good.  It's an education to watch him work.
Posted by Seeker at 8:15 PM