Tattooing the Back Yard

Two weeks ago we moved onto a lot with an immense amount of planting space.  Our acre and a half is shaped like a wide slice of pie that is tipped downwards toward the tip, which is submerged in Hidden Lake.  When I considered how to map out a large daylily hybridizing operation on this sloped triangle, I thought of making a big, horticultural tattoo like the doodles I used to draw during meetings. 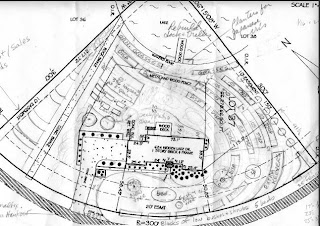 I enlarged the survey of the property and used a French curve to lay out a series of sweeping curves around the right side of the house.  We'll develop the left and right back yard first.
Yesterday I got down to business with a Bosch rangefinder laser, a tape measure, and my map.  The survey is pretty much drawn to scale, but "pretty much" was the cause of much figuring when it came to establishing marks on the grass.  For one thing, the concrete and rock swale that takes stormwater down the left side to the lake is not a straight line, as drawn.  Nor is the line of the fence on the left positioned accurately with respect to the brick wall.  The fence is gone now, but a line of straw shows where it once was.
My plan called for the garden beds on the left side to have edges 8 feet to the right of the swale.  Since the position of the swale was inaccurate on the map, my first challenge was to establish a straight line roughly eight feet from the rough edge, taking into account the evidence of secondary water flows on the grass.  The swale, you see, is a jumble of concrete rubble that does more to divert the water away than to channel it.
Then I tried to mark the location of Kathy's six vegetable plots, each 4 x 10, with 6-foot paths between.  With some fudging, I got them plotted and then discovered that the slope away from the driveway had forced my plot much farther down toward the lake than I'd imagined.
So I worked back from the shoreline, 15 feet, and laid out my big area for growing selected seedlings, measured what was possible, and marked the dimensions on the map.  Then I used up my two cans of bright orange "upside down paint" to mark deeply enough that something would remain after today's lawn mowing.
When Kathy and I looked at that design from the deck, we both agreed that we needed to change the design and try another idea there.  This morning I took a picture of the layout we saw.  I used the "pen tool" in an editing program to reinforce the lines I painted on the grass. 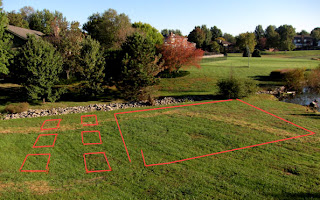 My big bed is about 50 x 50 feet in this view.  Each small bed is 4 x 10.  The new plan is to pull the right boundary of my big bed back from the lake another four to six feet.  Then we'll move the left set of three small beds onto the left side of my big bed, making the big bed a rectangle.  What's sacrificed from the big bed will be restored to the left of the veggie beds on the slope up.  I may terrace that area.  The new plan will keep the veggie gardening entirely on flat ground.
Posted by Seeker at 9:15 AM