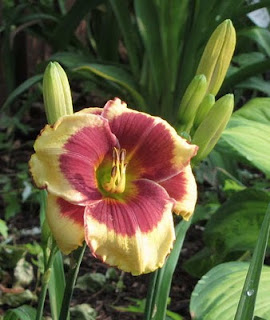 I take daylily pictures in the morning.  The time before breakfast is when I like to discover if a new daylily opens fully before I go out to enjoy the garden.


This one is named ARAGON.  It's by Patrick Stamile, who is one of the foremost breeders in our time.  I took the picture with out new compact digital camera, the Canon S90 set on Program mode with ISO at 200 and a minus 1/3 f-stop adjustment.  I've set the camera colors to neutral rather than vibrant.  The greens in the background look realistic to me, but the red seems less saturated than I observed.

The plant itself arrived in the mail about six weeks ago and is growing in a pot.  I don't know, therefore, whether its fading during the day is due to an iadequate root system.  I would have to grow and evaluate it for two or three seasons in the ground and undisturbed to have a clear idea of its garden value.  In the morning, growing in a pot, I'd rate its value high. 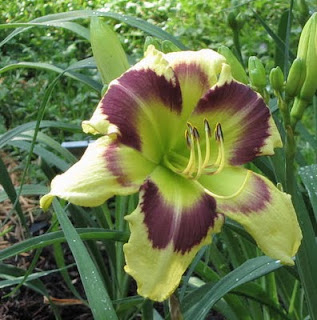 This is Ryan Gossard's HEAVENLY DARK MATTER.  It has been in the ground since last June and is blooming for the first time here this year.  Its first blossom opened today, so it's an early season daylily.

The flower is big and its maroon purple eyezone is big, too.  The base color is a pale greenish yellow.  I bought this for its hardiness in zone 5.  I'm trying to set seeds on it with pollen from Patrick Stamile's GIANT PANDA, a new plant here this spring of unknown hardiness.

The end of May is when those sentimental orange "ditch daylilies" begin to bloom in St. Louis.  I have always loved seeing masses of them along the roadside or around a tree stump.  They don't belong in a context of these bold, modern hybrids, and they really don't belong anywhere near a lawn because they are invasive.  But let them invade a wooded roadside, and I'll love that road!
Posted by Seeker at 9:49 PM

It is nice to have access to your beautiful photos.
Jonas