A Passing Form of Institutionalization

I have a step-nephew, once or twice removed, and named Wilson Oldhouser, III. He is the grandson of my stepfather-in-law, Wilson Oldhouser, who I first met in 1975. I’ll call my stepson “Bill” to avoid confusion. Bill is a lawyer in Baltimore, an hour’s drive south of York, PA, where Wilson lived most of his life. Bill had formed a lifelong bond of affection for Wilson, and vice-versa, and so, by the grace of God, Bill was in the right place, with the right maturity and legal connections, to intervene by degrees when Wilson began to lose his senses.

Wilson died in April of this year in an Alzheimer’s care facility near Bill’s home. Alzheimer’s was Wilson’s largest and possibly only fear in life. He had seen his brother Woody succumb to it. When it came upon Wilson’s own mind, it buffered him from a terrifying self-awareness. Thus, as far as I know, Wilson never spoke of losing his senses. He didn’t know they were gone. There was some god-given essence to Wilson that prevailed in social interaction even when he could not remember. 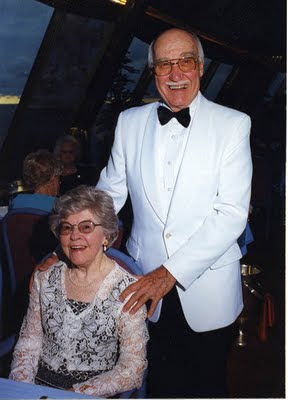 Wilson was larger-than-life to the members of the family and to many of his friends. He had a big, outgoing personality. He had a piercing baritone speaking voice and a huge smile. He loved adventure and feared no risks. As a fighter pilot in World War II, he had lived to tell the tale of more than one brush with death.

My late wife, Sandra, was his stepchild. That was an uneasy relationship for her. She had lost her father in a divorce that took her by surprise when she was fourteen. A couple of years later, her mother, Gladys, married Wilson in 1956. In 1975, before I was taken to meet Gladys and Wilson, Sandra thoroughly cautioned me about Wilson’s brash manner. I think she feared he would scare me off.

When I met him I made a brash game of our getting to know each other. I made wise cracks. I gave him goofy answers. I made him laugh. He realized that we were in for a long game of verbal delight. And so, as our relationship developed, he never once tried to throw me off balance, and I never engaged him in anger. We had become something like buddies.

During my period of grieving over Sandra’s death these past months, I didn’t keep up with Wilson’s condition. I contacted Bill in April to ask about Wilson and learned that Wilson was in failing health at the time of my note and that he had died five days later.

Bill is an excellent writer. His Christmas letters to the family are always warm and interesting. I saw that warmth and ease again this week when Bill sent me the transcript of a memorial gathering of lawyers and judges on August 7 in York, Pennsylvania. I take this transcript as a “historic artifact” because it is evidence of a vanishing form of memorial called “Minutes of Respect.” It resembles a Quaker assembly in which various people rise in turn and say something in memory of a departed friend.

At the close of the proceeding, Judge John Uhler remarks on “Minutes of Respect” as a passing institution. He speaks of the manner by which a profession memorializes its members and considers whole people and whole lives. He says, “There is always a debate as to the appropriateness of the continuation of these Minutes of Respect, and the debate evolves from the younger members of the Bar. They are not swelling to include themselves in observance to these Minutes, and it's a passing form of institutionalization of times gone by. I'm an advocate that these Minutes continue. How else can we memorialize the history of our members, the sheer diversity of interests that our members bring to the table and before us? And quite frankly, the Minute that has been presented by Bill has, quite frankly, given a new focus, a new picture of Wilson that I never had the opportunity to experience, and I thank him for that. We need to memorialize our history, and it's important not only for the family members but it's for the members of the Bar to recognize that there are more things to life than billable hours.”

I have made a PDF file of the Minute of Respect with Bill’s permission. I have also connected Judge Uhler’s final remark – “there are more things to life than billable hours” – to the objects I see in museums. Local museums have long served the function of “memorial station” for town residents. There is a memorial quality to donating tangible objects to a museum, so just about everyone, sooner or later, will approach the museum board with a proposed donation of objects.

It is the job and duty of the museum people to bring objects to life. Last week as I gazed at an array of rusting old farm machinery I thought, “There is so much more to life in a farming community than obsolete tools and machines.” What Judge Uhler is responding to is a compelling story. The presence of rusty equipment is not the museum’s problem. The problem is the absence of story. That is a problem that can be solved over and over, in ways that offer a fitting memorial to the forbears and departed friends and relatives who worked on the land.

One of the heartbreaks of dementia: a glimpse of the "real" person, still preserved-in-amber in the occasional social amenity.