"An" is a pesky word. People are afraid of sounding natural or appearing uncouth, so they stick "An" in front of a word with a voiced H, such as "historian." The strict grammarians who taught me some of what I know stressed the importance of smooth elision. They said that "an" only belongs in front of an unvoiced H, such as one might hear in a Cockney accent....'istorian. Used in a sentence, 'e's come up i' the world, 'e's an 'istorian.

Actually, that's far-fetched, it's an honor to say.

I shouldn't, but I shudder when someone writes "an historian," but I don't pass a remark on the subject.

In honor of dear, misplaced Anne, I wish to report "an" halucinatory incident this morning while taking Lola the Poodle on her morning constitutional. I saw an white egret looking for breakfast at the well-stocked pond at Lewis Park, and, just beyond th' egret, I saw a fish bicycling fast in the opposite direction, but getting nowhere. 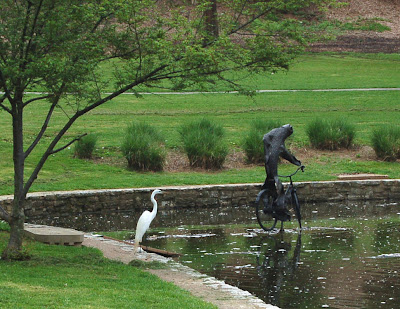 How this story turns out, I cannot say. Th' egret was 'appy to 'ave me snap a picture or two, as long as Lola and I kept our distance. So 'ere is the evidence, that I am not crazy.

Email ThisBlogThis!Share to TwitterShare to FacebookShare to Pinterest
Labels: bicycling fish, egret, elision, use of an