The Art of Lieder Singing 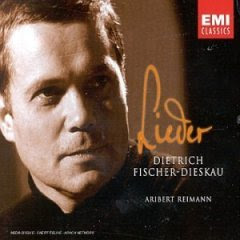 After I bought my iPhone, I discovered a treasure of classical music on YouTube. Here is one by the German Baritone, Dietrich Fischer-Dieskau. This one performance is sufficient to convey the essence of German Lieder singing, what we aspired to do and be when we first learned this repertoire as undergraduates.

The song is “Gute Nacht” by Franz Schubert. It is the first song in a sequence of twenty-four in a cycle titled “Die Winterreise” (Winter Journey). There is a lot of commentary about this song cycle on the web, and you can spend a day or so getting into the context of German art songs, German Romantic poetry, and Schubert’s place in the history of song.

I suggest you look at the performance first, and don’t fret about the lousy video quality. It’s probably from an old source, as the performance dates from 1966, perhaps on Japanese TV. Look and listen, and then follow along as I describe what I see and hear, and why this would suffice if all other Lieder recordings were suddenly to disappear.

The first thing one notices about the song is the regular pattern of sound that the piano lays down. It evokes the thought of footsteps. The minor key is somewhat somber. There is no figuration in the piano part, just the steady “footfall” of block chords. We know from the title that the time is night and the season is Winter.

The job of the singer is to create a sense of the personal situation that prompts these lines of poetry, set in just this way by the composer. The text is not a play, so the actor’s craft here is to imagine what sort of “character” utters these words.

Now is a good time to have a look at the text with a line-by-line translation by Professor Celia Sgroi from the State University of New York at Oswego (by coincidence, the place where I had my first college teaching job).

What is distinctive about Fischer-Dieskau’s art is his ability to “place himself” in the currents of emotion that lie between the lines and between the stanzas. In this song, he must be observed by the audience as he mutters to himself about what has just transpired. In many art songs, there must be no direct eye contact with the listener. This song is a soliloquy.

Someone has lost in love and is leaving town after everyone has gone to bed. “A stranger I came, a stranger I leave.” When you watch the video again, just look at his body movements. I think all of them are expressive of the emotional currents in the text.

As you watch, listen very carefully for changes in vocal tone and intensity in the text. At the start of the second line, when “Fremd” is reiterated, did you hear Fremd? He leaned on “stranger.” It pains him.

Then when he sings “Die Mutter gar von eh’” the second time, it’s a blow. The mother even spoke of marriage, (and now look where I am)! But then, in the space between that line and the next one, Fischer-Dieskau takes a hard slap to the face. You can see it. He is stricken to think of the reversal of fortune, and we believe it. We are no longer watching Fischer-Dieskau, we are watching the unnamed fellow who is, literally, left out in the cold and on the way to who-knows-where?

He modulates the sound in the next phrase, “Now the world is so gloomy.” And after the repeat of that phrase, I sense shame in his downcast look. He leaves with a sense of disgrace; can’t face the people in town, or the girl he lost, or her mother.

Then a fleeting look of resignation to his fate, and the soft utterance of his powerlessness to affect his course. The active word is wählen in the second line. Listen closely to how the character of the tone changes on the important word. Then, as soon as he comments on the darkness, he thinks of the moonlight overhead and sees it before he sings it. But then, as he sings of deer tracks in the snow, his mind is obviously back inside the house he is approaching, where his former love lies sleeping.

His art consists of knowing what to transmit; certainly not deer tracks in the snow, but the emotional affliction that sets the scene for what is to follow.

The next verse is edgy, combative, and he avoids the sophomoric trick I’ve seen recommended elsewhere on “Lass irre Hunde heulen/Vor ihres Herren Haus?” The trick is to exaggerate the rolled Rs to mimic the growl of dogs. To do that is to draw attention to a detail “on the outer surface” of the performance, when the whole point of this song is to draw attention to the inner life of the sufferer.

And then a shift of mood toward “distraught” on “Love loves to wander, it’s God’s plan.” Listen to how he spins “einem” and “andern,” “one” to “another.” Then he backs the sound off into bleakness as if to say, “God meant me to be the loser.”

As the piano finishes that verse, Fischer-Dieskau weaves in space as if blown about by the winds of a cruel fate. The interpretation continues through the spaces in the text.

And then, amazing!, Schubert suddenly changes the key to major, and any sensible pianist makes the slightest delay in the forward motion of the rhythm just before entering "the atmosphere" of those major chords, and then the walking rhythm is as before. And even before this major tone is sounded, the singer is bereft, and his vocal utterance a moment later is delicate, bordering on inaudible, but with the slightest emphasis on “shame” in the second line.

The climax of the piece is “an dich hab Ich gedacht,” On you I thought! The musical peak is “An dich” but there’s a slight portamento downward to “dich” to continue the sense of emphasis. (None of these nuances are notated in the score). At this point, you can hear something new in the way the pianist is presenting those repeated chords. There is a sense of small blows falling, again not notated, but part of inhabiting the spirit of the story.

You may have noticed that there is no sense of physical effort in his vocal production. He will not be exhausted physically after twenty-four songs without a break, but you can already imagine how emotionally drained he will be. This level of commitment is what distinguished Fischer-Dieskau when he launched his career at the age of twenty-two in 1947. He was forty-one when he gave this performance.

If you listen another time or two, you can make a study of “perfect” legato delivery. True legato is a seamless flow of sound from one syllable to the next while retaining clarity of words. In this performance, legato is the norm, and any breaks are for textual clarity or emphasis.

You can see quite a few other examples of Fischer-Dieskau’s art on YouTube. I was so enchanted with this that I bought two DVDs of full performances of this song cycle and Schubert’s other big one, Die Schöne Müllerin.

I remember when I first heard his name. I was a college freshman on a tour with the Penn State Singers, and our leading student baritone was going on and on about the quality of Fischer-Dieskau’s sound. It would be two years before I first heard him on recordings, about the time I was first assigned some Schubert Lieder for my senior recital. Then in my senior year, my voice teacher organized a group trip to hear him give a recital in Carnegie Hall. I was wonderstruck. I started collecting his records. My teacher said I would never succeed at that; he was the most-recorded voice in history.

I saw him in recital again in Montreal in 1975, and again in Carnegie Hall for a series of recitals in the mid-1980s. One of my DVDs is of a Schubert performance he gave in 1992, a couple of months before he decided that he was no longer meeting his standard of excellence. I can hear the voice of a man of 67 in that recital, but only now and then. For most of the time, I hear the same quality of sound he always had, and the same world-stopping penetration of the emotional life of the songs.

For me, Fischer-Dieskau did not “interpret” a song. He was the song!

I love D. F-D.! I have his recordings of both DIE SCHOENE MUELLERIN & SCHWANENGESANG. Naturally, my favorite song cycle of all time is DIE WINTERREISE - but I haven't heard Fischer-Dieskau do it. I'll definitely look into his interpretation!

Im working with this song right now! It's pretty weird, i read a totaly different story out of the lyrics. I think he is cind of a jackass, he left the girl! I think he is the type of a guy that cant stay at one place, he excuses him self by blaming that god made it that way. A bit of blastphemia. When we at the last verse of the song he say how he leave the house at night before before they send the dogs on him. His afraid that the relationship wouldn't last. According to the lyrics he sneaks out while asleep, and leaves a cind of goodbye note. And at the end "an dich hab ich gedacht" when he excuses himself as he disappears in the night!