This morning I helped San make the “Cranberries Grand Marnier” that we have made almost every Thanksgiving for twenty-five years or so. Then she made the sweet potato casserole with sherry and walnuts. Tomorrow we’ll make the turkey stuffing from an issue of Gourmet magazine way back when, November 1980. When first we made it, I would have happily made a meal of only the stuffing. It involved sausage, prunes soaked in Madeira, this and that. These days we substitute chopped mushrooms for the sausage.

I copied out the cranberry recipe this noon:

Heat sugar and orange juice in a large saucepan over medium heat, stirring occasionally, until the sugar dissolves, 3 to 4 minutes. Stir in cranberries, orange pulp. Add orange peel. Heat to boiling; reduce heat. Simmer uncovered until juice is released from the cranberries, about 10 minutes. Add the Grand Marnier. Simmer 2 minutes. Refrigerate over night, and then don’t hog it all for yourself!

Cranberries are part of my family history. My grandfather, Bill Feaster, set up a trucking company in the 1920s to move the produce of central New Jersey to cities in the region. He lived near the cranberry bogs and would truck empty tin cans into the cranberry factories and truck canned cranberry products out. 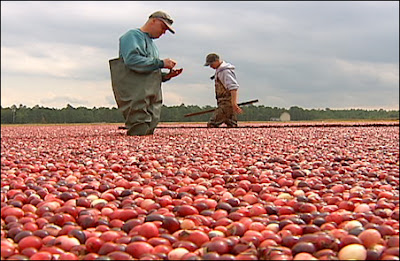 Trucking was his second career. He was legendary in his region of New Jersey as a veterinarian. He had studied through correspondence courses at McGill University in Montreal. I don’t know the story of why he quit the veterinary work and set out to build a trucking enterprise. I’ve probably heard the story; maybe it’s in the notebook I filled when I got Mom talking about the old days.

My grandfather had already retired when I was born. I knew him as a hunter, landlord, and avid vegetable gardener. He hunted raccoons for the sport of it. He shot squirrels, too, from time to time for a dish my grandmother made. It was called “squirrel pot pie” but was no such thing. “Pot pie” was an expression meaning “stew with delicious dumplings.” I could have made a meal of those dumplings, and my grandparents would have encouraged me to do so, because to them, eating was a wonderful thing to see, even in a child who was developing into Baby Huey.

Though there were shotguns leaning next to the phone in their house, my grandparents never so much as hinted about teaching me to use a gun or to hunt. I have long imagined this was a result of the sternest possible warning from Mom, but I never asked her if it was true. I had any number of toy revolvers, but never owned so much as a B-B gun. Guns belonged in some other world.

Plants were another thing entirely. My grandfather grew a patch of blueberry bushes, and my sister and I were chief among the pickers. He grew a patch of strawberries in that rich black earth. He grew sweet corn, asparagus, peas, lima beans, pole beans, cabbages, cucumbers, squash, and majestic Jersey and Beefsteak tomatoes. My Aunt Millie, who lived with them, grew row upon row of gladiolus for cutting and maintained a big wire cage of parakeets (briefly, when they were in vogue).

Thanksgiving was always a large festival in our family. My mother’s family included her parents and half-sister, my Aunt Millie; her other half-sister, my Aunt Gertrude, and her husband, Uncle Bill Ellis, who prospered as a small-town commercial printer near Fort Dix; and Gertrude’s foster parents, Aunt Cora and Uncle Winfield Morris. Aunt Cora was the sister of my grandmother’s ill-fated first husband, the father of Gertrude and Mildred, who died of an ailment around the age of 20, leaving my grandmother unable to support two babies. So she gave one to Cora and Winfield, who raised but never adopted her in Cookstown, where my grandmother found work as a chamber maid in a country hotel.

Uncle Winfield had a resonant bass speaking voice, a beautiful, broad smile, and attentive eyes. Aunt Cora had a reedy voice and faintly purple white hair. Aunt Cora and Uncle Winfield raised only Gertrude. Winfield was a plumber and a town constable.

Aunt Gertrude and Uncle Bill had no children, but they had a small poodle. Uncle Bill was enthusiastic about model railroading and music. He had worked before the War as a banjoist in a pit orchestra.

Aunt Millie lived at home all her life, appears from skimpy evidence to have had an abruptly terminated courtship at some point, never married, wore a mannish hair style and mannish clothes, liked to bowl, liked Eddy Arnold’s singing, painted by numbers and hung her paintings around the house, read Popular Mechanics and Confidential, made her living driving a high school bus route, and loved me dearly. My grandfather legally adopted her around the time of his retirement. I don't know why he waited so long to do that, or what or who prompted him, but it was some kind of "statement" in the family and was a big deal, considering that Gertrude had something like orphan status by comparison.

Mom was the only child of my grandfather, Bill Feaster. She never learned much about cooking and hated to cook. She was fiesty and adventurous as a girl and young woman. She was also the first person in the family to go off to college. When she landed her first job at a publishing house in New York, my grandfather was heartsick at the loss of her. He cried when he saw her off at the Trenton depot.

New York was what Mom and Dad had in common. It was magic for both of them. Both of them had been raised in rural towns, too. Before she met Dad, a serious ailment ended her New York days and plunged her back into the obscurity of New Egypt. I imagine she felt cheated by fate. A door had closed, that’s how I imagine it, having never asked her about the emotional side of her history. (Why?)

The war came, she got a job as a secretary at Fort Dix, a good job because she looked glamorous. She told me about a promotion to a job held by a less gorgeous woman, who was transferred to Newark. Then one day, in walked youthful Herman Bouman, architect working in a New York office and involved in the expansion of Fort Dix. He must have seemed Deliverance to her. I can’t think of the word for what she must have seemed to him, but the fact that this beauty was also a confirmed member of the Lutheran Church led to a moment of “reduced expectations” that my mother told me about decades later: his idea of a date was to attend church together.

But they married, and then I came along, and then Chris, my sister, and every Thanksgiving and Christmas all of us would enjoy each other’s company, the sounds of our speech, the feast dishes on the table with the turkey, the pumpkin pie after. I am thankful to have such warm memories to go with the cold seasons of the year. I am one of the lucky ones for that. I look outside at the chilly rain, and I know there are people not far away who don’t have a warm or a safe home to return to; or they don’t have anyone who loves them dearly; or they haven’t had much luck. Bless them all, Lord. Take care of them. Give them hope.