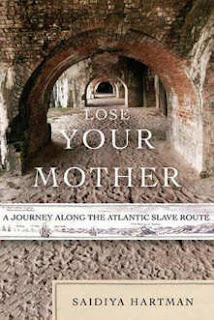 I've recently finished a superbly-written book about personal identity by Saidiya Hartman. The book is Lose Your Mother (A journey along the Atlantic slave route). Not only is the writing great, but the book is an example of how you don't need to pad the narrative when you've got so many heavily interesting things to say.
A hundred pages in, she says: Every generation confronts the task of choosing its past. Inheritances are chosen as much as they are passed on. The past depends less on "what happened then" than on the desires and discontents of the present. Strivings and failures shape the stories we tell. What we recall has as much to do with the terrible things we hope to avoid as with the good life for which we yearn. But when does one decide to stop looking to the past and to instead conceive of a new order?
I knew a man several years ago whose life story went this way. He was raised in a house of privilege, went to good schools, became a professor. Around age 40 he learned from his dying father than a truth of his lineage had been concealed. A branch of his family tree was Abenaki. This knowledge brought on a conversion of identity. My friend acknowledged his Abenaki heritage as the central aspect of who he would be, and he decided to devote himself to improving the lot of the Abenakis in whatever way his training and energy might permit. He uprooted his life and put down new roots in the Abenaki homeland.
Nothing external required him to do this. "Society" did not expect this of him. Because of mixed heritage, he was fully a member of a "mainstream" society that did not pay particular attention to the legacy of injury to indigenous peoples. Something within my friend prompted him not only to acknowledge a genetic link to that history of injury, but to identify himself with it and to take steps to heal it.
I thought of him when I read what came to Saidiya Hartman's mind as she thought about her visit to an old holding cell for slaves on the coast of Ghana. I hope you, too, read her book and turn down the corners of many pages, as I have. The book has its own web site:
http://www.loseyourmother.com/